Several college friends go to an isolated lake house for a weekend to relax. When a shark attacks one of them, they must try to find a way to get help and make sure they don't encounter the shark again. With Sinqua Walls, Chris Carmack, Joel David Moore, Sara Paxton, Dustin Milligan, Katharine McPhee, Joel David Moore, Chris Zylka, Alyssa Diaz, Joshua Leonard and Tyler Bryan. Directed by David R. Ellis. [1:35]

SEX/NUDITY 5 - A man poses fully nude in an art class and we see his bare shoulders, back, buttocks and legs while he winks at one of the female students. Two women dance and undress and the sides of their bare breasts are visible as they put on their bikini tops.
► A man and a woman wearing swimsuits (she's in a bikini that reveals cleavage, bare abdomen, back and legs and he's in trunks and his bare chest is visible) splash in a lake, hug and kiss and he unties her swim suit top and throws it into the water (we see her bare back when she goes to retrieve it).
► A man with a gun forces a woman to undress to her "bra and panties" while he and another man watch and make crude remarks about her. A man watches two women in a bathroom over a security camera (we see one woman fastening her shorts after using the toilet and her bare abdomen is visible).
► A woman walks into water the camera focuses on her bikini-clad buttocks. The camera focuses on a woman's clothed buttocks as she walks. A man sprays his genitals with a squirt bottle (he pulls the waistband of his swim trunks). We see a woman being tattooed on the lower back. Many women are shown wearing bikinis that reveal cleavage, portions of bare buttocks, bare abdomens, bare legs, bare backs and shoulders. A woman wears fitness gear that reveals her cleavage and bare abdomen. Several women wear low-cut tops that reveal cleavage, bare backs and shoulders. A man removes his shirt and we see his bare chest and back.
► A man asks a woman to have sex with him on a pool float (she jokes and changes the subject). A man talks to another man about "tickling a woman's privates," that he should "see a woman naked," and that he's going to "have to get a woman drunk" to get anywhere with her. A man asks another man about his "eye humping" a woman. A woman talks about a man being "hot" and that he might be worth her attention (sexually). A man tries to dissuade a friend from becoming engaged and talks about all the strip clubs and groupies that he'll have when he is a professional football player. A woman talks about a man and that after being with him (presumably having sex) she had stains all over her clothes. A man tells another man "you're hung like a toddler." A woman talks about all the "little rich girls" taking diving lessons from a "hot." A man shines a light on a man and a woman's cleavage and says "how big?" (referring to a shark). A man tells another man [a model] "I had the pleasure of sketching your genitals in art class." A man makes a comment to a woman about having a "threesome" in the back of a car. A man talks about the "show me state."
► A man makes a suggestive gesture with his tongue. A man licks a woman's neck after nearly biting her.
► A woman kisses a man. A woman touches a man's hand and he caresses her face tenderly.

SUBSTANCE USE - A woman makes a comment about another woman taking a Xanax, a man is drugged, and a woman is shot in the back with a tranquilizer dart and falls to the floor unconscious. A sheriff is shown downing a can of beer, a man drinks a beer, several people toast with beer cans and bottles (they are not shown drinking), a man introduces himself as an alcoholic, and a man says that another man has "had too many today."

MESSAGE - Stay out of the water and never vacation in a place that doesn't have cell phone service. 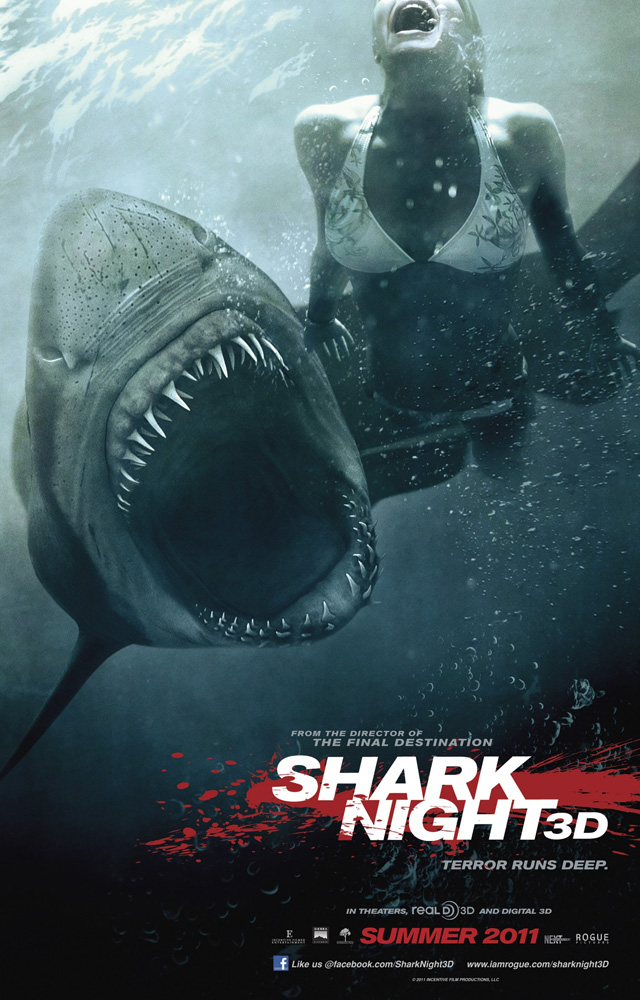