A man (Michael Fassbender) struggles with his sex addiction while trying to function professionally and socially without being discovered. Also with Carey Mulligan, James Badge Dale and Nicole Beharie. Directed by Steve McQueen II. [1:39]

SEX/NUDITY 10 - A man watches as another man and a woman have sex against a window: the woman is fully nude (her bare breasts, abdomen, pubic region and legs are visible) as the man (his bare chest and legs are seen) thrusts from behind. A man and a woman have sex against a window: he thrusts from behind (his bare buttocks, back and legs are shown) until he climaxes (we hear moaning and rhythmic breathing), he sits on the floor and she dresses to leave (we see her bare breasts, abdomen, buttocks and pubic region).
► In an extended scene, a man and two women have sex (we see the women's bare breasts and buttocks and the man's bare chest, abdomen, pubic region and legs): the women kiss each other while the man thrusts into each of the women, he kisses them and caresses their breasts and he places his face between the buttocks of one woman, and they change positions and partners several times.
► A man and a woman kiss passionately, she unbuttons his shirt, she kisses his chest and neck, they lie on a bed and kiss, she straddles him and takes off her top (her bare breasts and her thighs are seen), he kisses her chest and breasts, he climbs on top of her, they kiss, he pulls away and she leaves. A man and a woman have sex against a wall outdoors: we see thrusting and hear moaning until they climax (they are fully clothed and they are in shadows). A man gives a woman money, they go to his bedroom, he lies in bed (wearing boxer briefs and a T-shirt), she undresses (we see her bare breasts, abdomen, and buttock and pubic region from the side), he reaches out and pulls her toward him and sex is implied but not shown.
► A man walks through a club where men are having sex and kissing and caressing each other (bare buttocks and chests are visible and one man is seen thrusting with another man); another man grabs the man and pulls him into a room, they kiss passionately and he moves down toward the man's crotch as he moans, off-screen (implying oral sex).
► A fully nude man walks through a room (his genitals, pubic region, bare buttocks, abdomen, back and legs are visible); this is seen several times. A woman in a shower is startled by a man (they are brother and sister) and she stands fully nude when she pulls back the curtain to see him (her bare breasts, abdomen and pubic region are seen). A fully nude man (his bare buttocks, back, legs and a portion of his penis are visible) stands at a toilet and urinates (we see and hear the stream).
► A man masturbates and a woman (his sister) walks in on him (please see the Violence/Gore category for more details). A man masturbates in a shower (we see rhythmic movement and hear him moan). A man masturbates in a public restroom stall (we see the rhythmic movement of his shoulders and hear rhythmic breathing). A topless woman is shown on a computer screen (her bare breasts are shown), she caresses her breasts, reaches into her panties and appears to be masturbating.
► A married man and a woman kiss passionately in the back seat of a taxi next to another man, they go to the man's apartment and we hear laughing, talking and moaning (sex between the married man and the woman is implied but not shown) and the third man appears agitated (he eventually leaves the apartment). A man and a woman kiss passionately.
► We hear a man and a woman grunting and moaning rhythmically and then see them in bed (the woman's bare back and the man's bare back and chest are shown; no sex is seen). We hear women moaning on a computer in many scenes and a man looks at the computer in some of these scenes (implying pornographic websites). A man talks to a woman in a bar and describes how he wants to perform oral sex on her; he reaches under her skirt and continues to talk to her until her boyfriend interrupts them.
► A man collects many pornographic magazines and videos from his apartment and throws them away; we see glimpses of covers that show bare breasts, pubic hair and women in seductive poses. A nude man lies in bed alone and covered by a sheet (his bare chest, abdomen to the hip and legs are seen) and his pubic region is visible when he gets out of bed (no genitals are seen). We see a woman's bare back and shoulders. A man wearing boxer briefs and a T-shirt answers his door to a woman. A woman wears a shirt that hangs off one shoulder and is made of a clingy material that reveals the outline of her breasts and nipples. A woman wears a low-cut top that reveals cleavage, bare back and shoulders.
► A woman climbs into a bed with a man (they are brother and sister), she snuggles against his back, he tells her to leave, and then yells at her to get out.
► A man and a woman dance in a club and he kisses her hand. A married man flirts aggressively with a woman in a bar. A married man flirts with and asks a woman if he can see her again. A man smacks another man on the buttock in an office setting (does not appear sexual). A man kisses another man on the neck (it does not appear to be sexual). A man and a woman on a subway train admire each other, they get off the train at the same time and the man follows the woman until she is lost in a crowd.
► A man tells another man that he is late because "your wife wouldn't leave." A woman leaves a voice message saying that she is "dying from cancer of the vulva."

VIOLENCE/GORE 5 - A woman is shown sitting in a puddle of her own blood after slitting her wrists (we see a lot of blood on the floor, on a knife and on her arms and lap); a man discovers her and tries to stop the bleeding (he becomes covered in her blood) and we see her recovering later in a hospital with blood-tinged bandages on her wrists.
► A man punches another man in the stomach and the face and kicks him in the stomach and spits on him when he is on the ground (we see the man with a bruise on his cheek).
► When a man who is masturbating is interrupted by his sister, he charges toward her, pins her onto a sofa, squeezes her shoulders and yells at her; she cries and yells for him to get off her (he does).
► A man hears music in his apartment, he grabs a baseball bat and barges into the bathroom where a woman is showering; they yell at each other and then calm down. A woman stands near the edge of a subway platform and a man pulls her back and to a safe distance.
► A man is shown with a bruise on his face. A woman is shown with scars from self-cutting on her arm.
► We hear a telephone conversation where a woman is pleading with a man and crying. A woman leaves a voice message saying that she is "dying from cancer of the vulva." A man says, "I peed my pants" when relating a story about his childhood.

SUBSTANCE USE - A man snorts a line of cocaine and drinks a shot of alcohol. People are shown drinking alcohol in a bar, a man offers to buy shots for three women (one of the women ends up buying the drinks), a man drinks a beer with food, people drink wine at a restaurant and people drink in a bar scene. A man smokes a cigarette in a few scenes and people are seen smoking on a street.

MESSAGE - Relationships are hard for some people. Addictions can be hard to overcome. 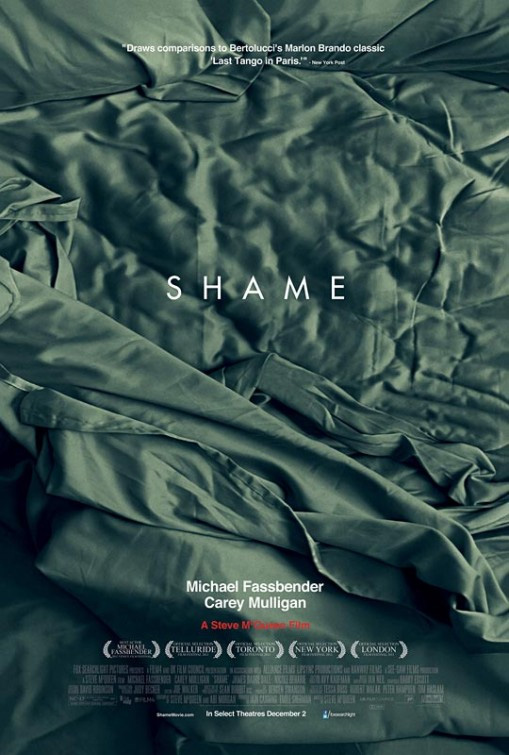