Samuel L. Jackson is the new Shaft (nephew of the original John Shaft), a tough detective who's on the hunt for a wealthy, racist killer and the frightened witness who can put the murderer behind bars. Also with Vanessa L. Williams, Jeffrey Wright, Christian Bale, Dan Hedaya, Busta Rhymes, Toni Collette and Richard Roundtree. [1:37]

SEX/NUDITY 4 - Some sexual innuendo (all during one conversation) and a passionate kiss. During the opening credits a series of close-ups show a man and woman presumably having intercourse; we see close-ups of her bare buttocks, hands caressing bare arms and chests, a nipple (it's unclear whether it's his or hers), and their facial expressions. A woman squeezes a man's clothed buttocks and a man grabs at his clothed crotch in a few scenes (he is angry rather than aroused). A man walks out of a bar with a woman on each arm. We see a presumably nude man's bare chest (it's implied his clothes have been stolen), three women in bras and panties (nothing sexual is implied or about to happen), and a few women in cleavage-revealing tops.

VIOLENCE/GORE 8 - Lots of people are shot (a couple are shot at close range); often we see them fall to the ground (one person is thrown backwards quite a bit), sometimes we see blood spray, and a few times we see bloody holes in clothing. A man with a slightly bloody shirt lies on a sidewalk with blood pooling near his head (we also see a bloody metal pole lying nearby); we later see him wearing a bloody neck brace and being moved to a stretcher, where he begins convulsing and presumably dies. In a later scene we see what happened to the man: another man hits him in the head with a pole, causing him to fall to the ground, then they struggle briefly (again, we see the bloody pole and blood on the man's shirt); the man puts his fingers in the other man's blood and then grabs a woman's face, leaving a bloody mark. A man is thrown out of a window and we see his lifeless body lying on the ground with blood running out of his nose and mouth. A man is stabbed and falls to the ground. A man stabs another's hand, pinning it to a bench for a little bit and causing a bloody wound, which we see in a close-up. A man holds a woman, pokes her neck with a knife (we hear a popping noise and see blood running down her neck), then throws her to the ground (we later see a bloody abrasion on her forehead). A man stabs his chest repeatedly but not fatally and his shirt becomes bloody and torn (we see him in a few other scenes afterwards). A man is hit by a car and rolls into the windshield (he's not injured). A man hits another in the face repeatedly with a gun (resulting in a bloody mouth), a man punches another twice (he gets a bloody nose and we later see him wearing a bandage on it), two other men are punched, a man punches another's crotch, three men grab another man and hit his crotch, a man backhands another, a man hits another in the head with a basketball, a man kicks another, a man chokes another, a man grabs another and they both fall through a glass door, a man is pushed through a door, men throw a trash can and other objects at another group of men, a man throws a badge at another (it nearly hits him before it sticks in the wall behind him), a man struggles as he's led out of a courtroom, boys scuffle, a man is nearly hit by a car twice, a few people are thrown to the ground, several people are pushed, and some people are grabbed. During a foot chase a man pushes two women down, men exchange gunfire, and a man jumps through a window and crashes through another building's window. Many police officers with guns raid an apartment, threaten people with guns, and lead a few people away. Lots of threatening with guns and a few scenes during which gunfire is exchanged; also, a few instances of threatening with knives, some verbal threatening, and in one scene a group of men threaten another group with bats. A car sideswipes another car and drives along a wall; also, a car chase during which lots of gunfire is exchanged, windows are shot out, cars bump into each other several times, and two cars flip over and slide on their roofs. We see a man with a little blood on his fingers, a woman with a little blood on her chin, a woman with a swollen red eye (she says her boyfriend hit her), and a man with a facial abrasion. A man pulls a corpse out of a car. We hear a plopping noise while a man sits on a toilet.

MESSAGE - Taking the law into your own hands ensures justice will be served. 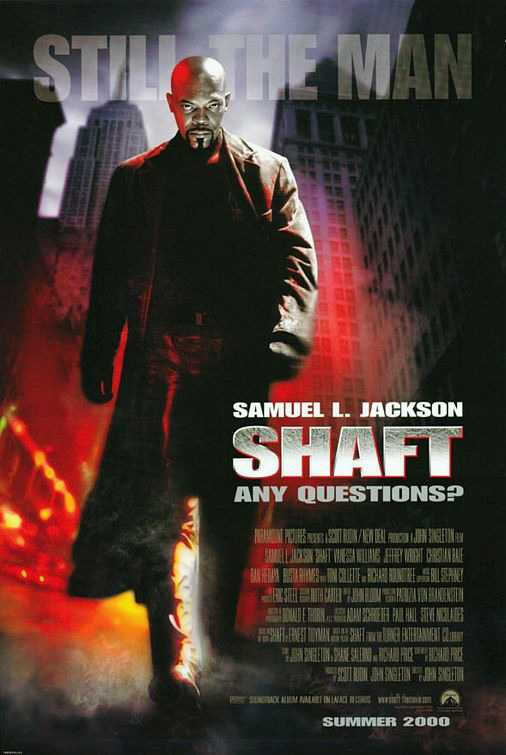