Why is “The Secrets We Keep” rated R? The MPAA rating has been assigned for “strong violence, rape, some nudity, language and brief sexuality.” The Kids-In-Mind.com evaluation includes several flashbacks to a rape, an interrupted sex scene with partial nudity, and a couple of kissing scenes; several flashbacks to a group of people being attacked with several being shot and others being raped, a kidnapping and torture with some bloody wounds from a gunshot, a severed finger, and a blow to the head with a hammer; and several arguments, and some strong language. Read our parents’ guide below for details on sexual content, violence & strong language. Set after World War II, a survivor of a German camp (Noomi Rapace), now living the American dream in the suburbs with her husband (Chris Messina), becomes convinced that a neighbor (Joel Kinnaman) is the same man that participated in an attack on her and her younger sister at the end of the war. Also with Amy Seimetz, Jackson Dean Vincent, Madison Paige Jones, Jeff Pope, David Maldonado and Ed Amatrudo. Directed by Yuval Adler. A few lines of dialogue are spoken in German without translation. [Running Time: 1:37]

The Secrets We Keep SEX/NUDITY 6

– Several flashbacks show soldiers raping women and we see thrusting and a woman’s bare breast and abdomen. A woman describes remembering a man raping her.
► A husband kisses his wife’s bare foot as she lies on a bed, he lies on top of her, they undress (we see the man’s bare back and buttocks and the woman’s bare buttock and legs with her nipples visible through the sheer fabric of her top), and they kiss and he thrusts briefly until they are interrupted by their young son. A husband and his wife kiss in a couple of scenes.
► We see a pile of bodies lying on the ground in the dark as we hear gunshots and one woman is shown with her bare breast and abdomen uncovered. A man is shown sleeping shirtless and we see his bare back and chest. A woman is shown wearing a top that is pulled off her shoulders and we see cleavage and bare shoulders.

The Secrets We Keep VIOLENCE/GORE 6

– A man is shot several times and blood sprays as he falls to the ground and he is covered with dirt.
► A woman asks a man to help her with her car on the side of the road: when he comes around to the trunk, she hits him on the head with a hammer knocking him unconscious (we see blood on his head later and through the rest of the movie); she puts him into the trunk of the car and later ties his hands and gags him. A woman opens the trunk of her car, pulls an unconscious man out of the trunk and pushes him into a hole in the ground, she points a gun at him several times, he pleads with her and she does not shoot him. Several flashbacks show varying details about an attack on a group of people where soldiers shoot several people (we see a bit of blood spray), drag other people away, rape several women and pile bodies on top of each other. A woman holds a cutting device to a man’s finger and cuts his finger off as the man yells (we see the bloody stump left on his hand, blood pooled on the floor and the woman’s hands are covered with blood). A man tries to tie another man into a chair and the second man hits him in the back of the head, kicks him and runs upstairs, slams through a door knocking out a woman on the other side and tries to get out the front door that is locked when the other man slams him into the wall, knocking him out. A man shoots at a woman and the bullets ricochet around the room grazing the woman on the forehead (we see blood).
► A woman questions a man tied into a chair: she pours liquor into his mouth and he gags and spits, she tells him to repeat a German term that we understand is an insult and when he does not say the words she slaps him in the face a couple of times. A woman tells a man she has kidnapped, “You will die here,” and, “I will kill you.” A husband and his wife argue and the man slaps the woman in the face. A woman tells her husband that she has a man in the trunk of her car and she says, “We have to kill him”; they then carry him to the basement where they tie him to a chair. A husband yells at his wife about torturing a man. A woman yells at a man and tells him, “You will never see your family again.” A woman describes what a man did to her when he and others attacked her group. A sheriff and two people come to a house where a man is held in the basement and the scene is tense. A young boy sees his mother with blood on her hands and he seems frightened and pulls away from her.
► A woman describes being attacked by several German soldiers that shot several of the people in her group, and did “horrible things” to the women. A woman describes remembering a man raping her. A woman describes having been in a German camp for 2 years during WWII and that she and her younger sister were taken there because they were Roma. A husband quizzes his wife about where she was when she was supposed to have picked up their son from school. A woman seems frightened by a man in a park and later in a hardware store. A woman wakes with a start in a few scenes. A man talks about his wife having seen a psychiatrist to help her with nightmares. A man talks about marrying a woman in order to become naturalized and that she was already married to another man.
► We see a pile of bodies lying on the ground in the dark as we hear gunshots after an attack on a group of people (please see the Sex/Nudity category for more details). A man is shown missing both legs below the knees with his pant legs tied at the end and he explains that he lost his legs in the war. A man moans after having been slammed into a wall and another man says that his shoulder is dislocated; the first man yells when the second man resets the shoulder. A man has a bruise on his forehead after he was struck by another man.
► A man uses a bucket to go to the bathroom and we see him pulling his boxers back up (no excrement is shown). A woman scrubs blood off the floor in a basement.

The Secrets We Keep LANGUAGE 4

The Secrets We Keep SUBSTANCE USE

– A woman takes a pill that we presume is a sleeping pill, and a woman offers to get another woman sleeping pills. A woman pours liquor into a restrained man’s mouth, and a man has a glass of whiskey on his desk while talking on the phone. Men and women smoke cigarettes throughout the movie in interior settings including homes, a doctor’s office, in cars and outside.

The Secrets We Keep DISCUSSION TOPICS

The Secrets We Keep MESSAGE

– Some secrets are meant to be kept hidden. 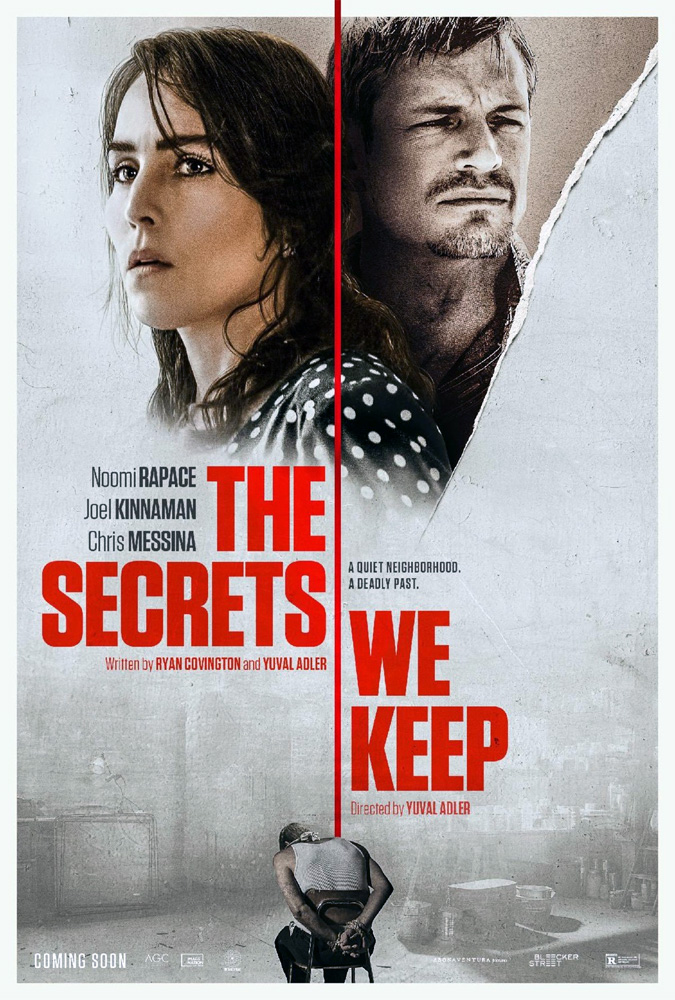