VIOLENCE/GORE 8 - Nearly all played for laughs. Someone is stabbed repeatedly then sliced in the neck (a little blood is visible, and we later see the body being dragged away in a trash bag); also, four others are stabbed with a knife or a hook, sometimes repeatedly and sometimes resulting in visible blood (once we see the bloody knife, once we hear squishy noises during the stabbing, and once two people watch the stabbing but don't intervene). Several people punch, kick and stab a woman to death (some blood is visible). In one scene a girl is stabbed (her hands and shirt become very bloody), then she twists and breaks her own leg (we hear a crunch and see the broken bone), then her head is severed (she continues to talk) and the bloody head is thrown into a trash can. A girl's chest is stabbed and we see a bloody breast implant stuck on the knife, as well as her bloody bra and hands. Someone waving a hook around unknowingly stabs and kills several people (we hear slicing noises, then see several slightly bloody corpses lying on the ground). A penis sticking through a hole in a toilet stall "impales" a boy through the ears (we later see him with a bandaged ear). A girl is killed when she's caught in a garage door that opens partially. A man jumps off a building to his death (we see him hit the ground). Someone is shot (we see a bloody hole in the person's shirt) and a man shoots at several boys who've just shoplifted from his store. A bottle is thrown at a man's head and knocks him out; he's stuffed in a trunk (the trunk door hits his head a few times), his clothes are ripped as people take his jewelry and wallet, and then he's thrown into a lake. In two different scenes a girl is hit by a speeding car (we see the impact both times and see one of the girls flip high in the air); also, a car skids and hits someone, but the person gets up after a bit and appears to be unharmed. In two scenes a boy chokes a girl and shakes her by the neck; in one scene he also punches and kicks her repeatedly, then body slams her on the ground. A boy hanging out of a moving car's sun roof is hit repeatedly in the face with tree branches, steps on a passenger's back and head, and at one point has a beehive stuck on his head (he seems unharmed afterwards). A girl throws a vase and rolls a bike and piano down a staircase at someone chasing her; the piano hits another person instead. Two people are involved in an extended fight scene: both are thrown against a wall, a lamp is broken over one's head, one is kicked through a door, and one is kicked in the face repeatedly. A girl mistakenly beats a few trick-or-treaters with a bat (we see them lying on the ground afterwards), a girl punches another, a man hits a girl in the back with a sandwich, a man hits a girl in the head with an ice pack, a girl is hit in the head with a flower bouquet and knocked off a stage, a girl hits someone in the head with a bottle, it's implied a man is whipped, a man steps on a woman's foot (we hear a crunching noise), a boy slams his fists against his locker, a man runs into a tree and falls, a boy falls backwards out of a window, and a couple of people are knocked down. Several instances of threatening with knives and guns, as well as several chase scenes. We see a bound-and-gagged man with his pants pulled down (boxer shorts are visible). We hear flatulence twice; in another scene a girl passes gas in a bath tub and then smells it. A man tells others he defecated in his pants; also, we see and hear men urinating in a bathroom. A large amount of mucus drips from a woman's nose, and a man drools in a few scenes.

LANGUAGE 7 - About 17 F-words, lots of anatomical references and slang, lots of scatological references, many mild obscenities, many insults, and a racial epithet. 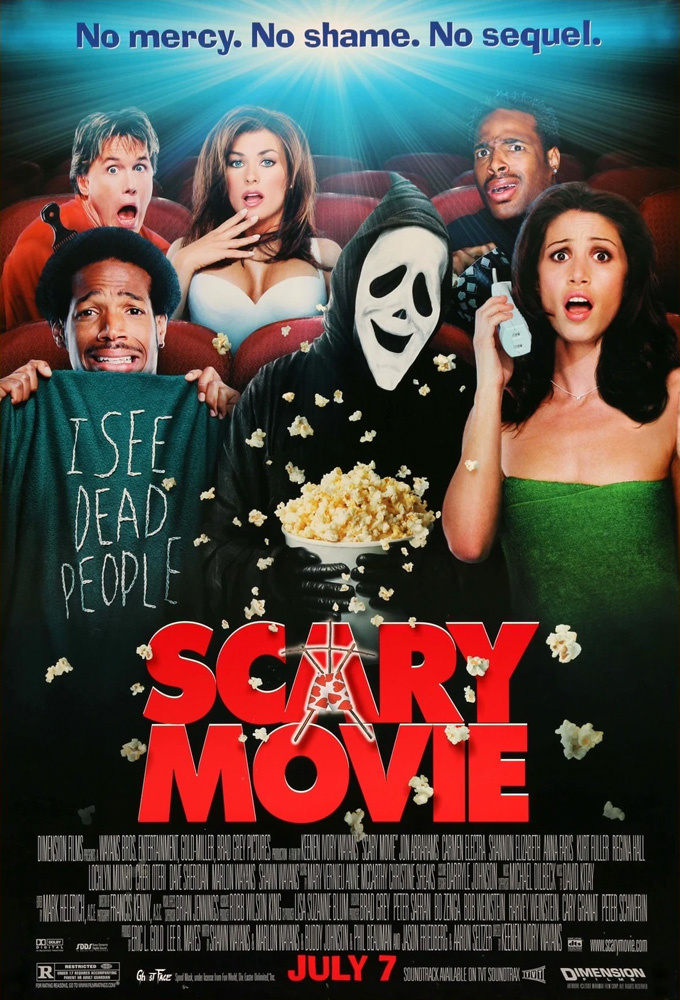