When a Scottish fisheries expert (Ewan McGregor) is hired as a consultant to help a Sheik bring his beloved fly-fishing to the desert, he is paired with a management consultant (Emily Blunt) and the two embark on their improbable mission together. Also with Amr Waked, Catherine Steadman and Tom Beard. Directed by Lasse Hallström. [1:51]

SEX/NUDITY 6 - A man is seen thrusting on top of a woman, we hear the man make a sexual grunting noise, he rolls off the woman and the woman remarks, "Well, that should do" (both the man and the woman appear fully clothed).
► A man and a woman kiss passionately, and we see the man lean the woman against a wall as they kiss; the woman interrupts and implies that she believes they will have sex, saying that she does not typically have sex on the first date, and as they continue to kiss, they fall over and we later see the man and the woman in bed together (sex is implied).
► A woman takes off her pants and climbs into bed with a man (we see her underwear and she is wearing a tank top, and the man is shirtless and a portion of his bare chest visible); the woman asks the man if it is okay that they do not have sex and the man agrees and kisses her back as he wraps his arms around her.
► A woman and a man are seen in bed (the woman is wearing a tank top and the man is shirtless); the woman gets out of bed and the man pulls her back into bed where they kiss. A man and a woman are seen in bed together, fully clothed. A man holds a woman to comfort her; we see the man lying next to her in bed, on top of the covers, as the woman sleeps under the covers.
► Reporters clamor for a man and a woman to kiss, asking "Can we get a kiss?" and the woman gingerly kisses the man. A man and a woman embrace and the woman kisses the man's cheek repeatedly. A man kisses a woman on the cheek. A woman kisses a man on the cheek. A man and a woman hug. A man and a woman hold hands. A man hugs a woman to comfort her while rubbing her back. A man lifts up a woman as they hug in celebration.
► We hear one half of a phone conversation during which we see a woman on the phone discussing what can be interpreted as a man having been caught in a sexual act, the woman asks, "boy or girl," and she acts surprised when it is implied that the person responds that the individual was female; the woman then asks the caller the age of the person and responds, "Well at least she's legal." A woman shouts at her husband, accusing him of having an indecent relationship with another woman and that he would tire of his affair; the man assures her that he and the other woman had not "done anything."
► A man and a woman are seen swimming in a river (the woman is wearing a slip and the man is shown wearing boxers and his bare chest is visible). We briefly see footage of a girl wearing a bikini.

VIOLENCE/GORE 5 - A man silently approaches another man, twists the man's neck and throws the lifeless body from a tall dam.
► Several men release the valves of a massive dam and a wall of water rushes down a riverbed, washing out several men that are fishing; they struggle to climb to safety and we later see men covering the body of a dead man and carrying it away on a skid as dead fish are seen on the riverbed and flowing downstream.
► A young man carrying a handgun approaches a river where two men are fishing, the young man aims at one of the men, and the other man whips his fishing pole's line at the young man, cutting his face with the lure and causing him to miss-fire and miss his target; a man tackles the young man and we see him carried away in handcuffs with a bloody cut on his cheek bleeding (the targeted man is shaken but unharmed).
► A woman watches a television report that several soldiers (including her boyfriend) had been killed while in active duty. A woman receives a phone call implying that her military enlisted boyfriend is "missing in action" (we see the woman crying). A woman asks a man if "missing in action" means dead, and the man very succinctly says that if he were dead the government would label him as dead. A woman tearfully asks an unseen woman over the phone if she had heard any news from her son, who was labeled as being "missing in action." We hear a portion of a phone call that implied a man previously believed to be deceased from a military skirmish had been found alive.
► We watch clips of explosions, including a car being thrown through the air, a flag being set on fire and soldiers storming through the streets. We see the debris of a large mosque explosion on television. A woman wakes up in the middle of the night and watches television footage of a mosque explosion while discussing with a man over the phone the implications of the mosque explosion.
► A man squeezes a fishing lure in his hand (we see a small amount of blood from the cut). A woman angrily shoves a telephone. During a heated phone conversation with a man, we see a woman shove her way past a man on the street.
► Two men shout at a man in a foreign language without subtitles; we see the men waving their arms around (the men are also carrying large rifles). A woman dramatically tells several men and women that she will be "strapping on her suicide belt." A man threatens another man that if he does not sign a contract he will be fired. A woman shouts at a man, accusing him of leaving her, and of "bullying little phone calls" and the man apologizes. A woman shouts at a man over the phone. A woman shouts into the phone during a conversation with an unseen man. During a chat conversation, we see a man and a woman discuss that another man is still alive and the woman jokingly implies that she wishes the man had drown. A man dramatically tells another man that he is sorry he "isn't actually dead." During a television clip, we hear a man say that taking fish from a river would be akin to the "rape and pillage" of a river. A man tells a woman that fish will die if transported to a river. A man tells a woman that thinking of her "kept him going" when he was missing in action. A man dramatically tells a woman that he had seen a fisherman try to drown a person in a canoe for wearing a day-glo vest. A man jokes with a woman, saying that a tailor had "sinisterly" followed him around London. A man dramatically narrates an email as he types, saying that salmon need oxygen and flies to survive. A woman accuses a man of suffering from Asperger's syndrome, and the man makes a joking remark that he has Asperger's but does not care if the woman teases him, since he would not have emotional responses.
► A man shows a woman an up-close photograph of a dead fish. A man acts disgusted when another man shows him a large, up-close photograph of a spider eating an insect. On multiple occasions we see men fishing, including seeing a man catch a fish and pull it into a net. A man stumbles and almost falls off a chair as he goes to answer a phone.
► A man playfully practices fly-fishing, hitting the lure (dipped in ink) against a photograph of another man's face.
► We see a woman and a teen boy playing a video game where a fox swings a hammer through the air and smashes a wall.

SUBSTANCE USE - Throughout the movie we see men and women drinking wine with dinner, a woman has champagne at lunch and a man tells the woman that he does not drink liquor other than on the weekends, a man and a woman share a small bottle of wine, and a man tells a woman that he will, "Open something fizzy" (implying champagne). On multiple occasions we see a woman smoking cigarettes. 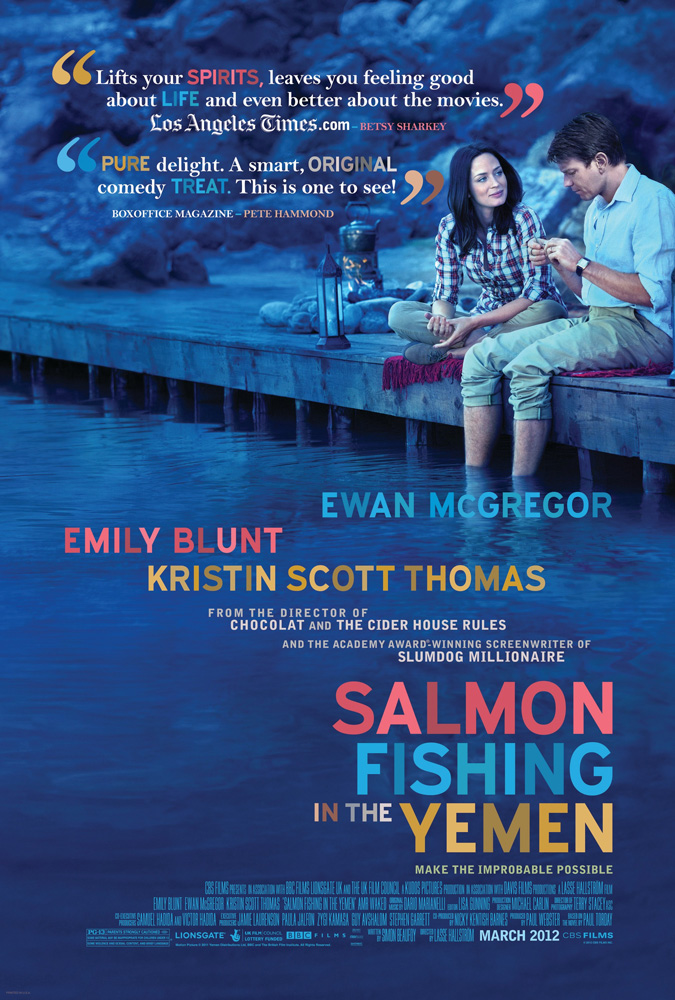