SEX/NUDITY 6 - A woman in underwear straddles a man, also in underwear, touches his chest and it is implied, but not shown, that they will have oral sex.
► We see a woman's breast in profile and her back and buttocks as she dresses and applies sunscreen. We see a man wrapped in a towel and as he dries off, and we see his bare chest, back, and buttocks.
► We see a sleeping woman in her underwear. We see a man in boxer shorts lying in a bed. We see a woman wearing a tank top and panties. We see men and women in swimsuits and bikinis at a pool and at a beach. A man takes his shirt off and we see his bare back and chest. We see a woman in a shirt and panties and with multiple bloody cuts. We see two women in short, sleeveless dresses.
► A man and a woman kiss in bed, a man kisses a woman, and a man and a woman briefly kiss. An intoxicated woman kisses a man on the cheek and gently bites his ear. Two women playfully smack each other on the buttocks.
► A man and woman make a wager and the prize is oral sex. A woman graphically describes French-kissing. A woman accuses a man and a woman of having an affair. A man and a woman play a game that involves creating innuendos such as, "the carpet didn't match the drapes." A woman recounts that a drunken man had been nude the night before.

VIOLENCE/GORE 8 - A man cuts a man's legs off with a knife (we see blood, flesh, and bones as he cuts through). A woman saws away a large portion of flesh from her leg with a knife. We see a man who has bloody, mangled legs that end at the knee. Vines pull bloody chunks of a man's legs across the ground, leaving behind trails of blood. We see a man with legs that are missing large portions of skin and tissue (they are bloody and we see torn ligaments and muscles).
► A vine chokes a man by growing down his throat (the man gurgles and struggles in pain). A vine twists in and out of a woman's multiple bloody wounds, and a vine grows out of a woman's bloody head wound.
► Vines squirm underneath the skin of a woman. A man cuts into a woman's legs, inserts his finger into the bloody cut, and removes a vine; also a man cuts into a woman's back, inserts his finger into the bloody cut, and removes a long bloody vine.
► We see the rotting corpse of a woman with many cuts on her arms, legs and face. We see bloody legs tangled in vines. We see bloody legs missing large amounts of skin and tissue. We see a decaying corpse.
► Men shoot another man in the chest, abdomen, and leg with arrows (blood bubbles from his mouth). Men shoot guns and arrows at a woman.
► A man shoots a man in the face with a gun (blood spurts out of the wound, and we see a bloody face, missing a portion of the nose). A woman cuts a man's hand with a knife, and a woman stabs a man in the chest with a knife (we see blood around the knife as it sticks from his chest).
► A man cauterizes a wound with a hot frying pan (we see smoke rising off the bloody wound and pan). A man breaks a man's legs with a rock (the man screams in pain). A man shoots a man in the shoulder with an arrow.
► A woman pulls a piece of glass out of a bloody wound on her leg. A man pulls a long vine out of a woman's bloody leg wound. A pale, dehydrated man has a bloody gash on his forehead.
► A man shoots a young boy in the head (we see no blood). We see a body lying on the ground with a splash of blood nearby.
► A woman ties a bandage over a bloody leg wound. We see a woman in a shirt and panties with multiple bloody cuts on her forehead, side and legs. We see a man and a woman with bloody hands. A man pulls a knife out of the chest of a corpse.
► A man falls into a deep hole, breaking his back (we hear a thud and moaning when he hits the bottom). Two women attempt to move a man with a broken back, he screams in pain and we hear loud cracking noises. A woman falls a short distance, moans in pain, and has blood on her pants. A man smears blood onto the face and arms of a woman.
► A woman struggles violently against vines that pull at her arms and legs. A woman is thrown forward violently by an unseen force. A woman screams in pain and asks a man to kill her. A woman shoves a man. A drunken woman falls down. A woman has scratches on her arms and legs.
► It is implied by a woman's screaming, which stops suddenly, that a man has killed her using a knife. We hear a gunshot and understand that a man has been shot off-camera.
► A woman with a hangover vomits into a toilet (we do not see any goo). A man vomits. A woman complains that the local water is contaminated with human feces.

DISCUSSION TOPICS - Containment of disease, the "greater good," death of a child, cheating on a lover, field medicine, death of a sibling, paranoia, mercy killing.

MESSAGE - A lack of understanding of local customs and locations can prove fatal. 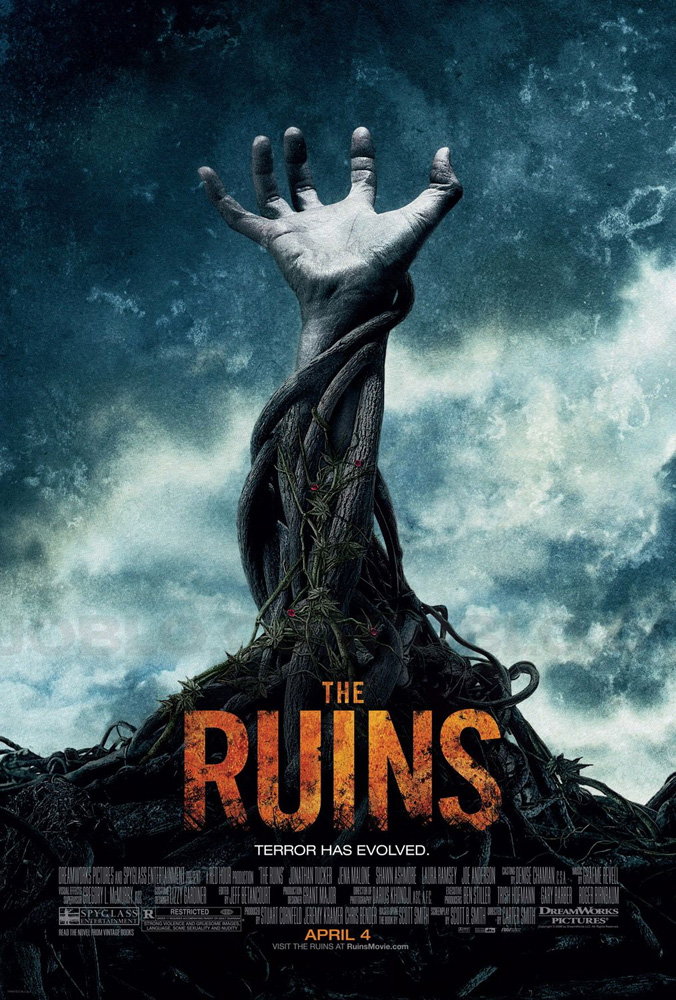