A young woman (Minka Kelly) moves into her new college dorm room and she and her roommate (Leighton Meester) become friends. However, the relationship soon deteriorates when the roommate becomes possessive and resentful. Also with Alyson Michalka, Cam Gigandet, Danneel Harris and Billy Zane. Directed by Christian Christiansen. [1:33]

SEX/NUDITY 6 - A young man and a young woman kiss passionately, they enter the young man's room, she removes his shirt (his bare chest and back are seen), he lays her back on a bed as they continue to kiss, he lies on top of her and it is implied that they have sex when the young woman does not return to her room until the next morning.
► A young woman talks to a young man on the phone about missing touching each other and it is implied that she may be masturbating -- judging from her expression and slight movement.
► A young woman enters the room of a man who is sleeping in bed (we see his bare chest), she removes her clothing in deep shadow (we see a dark silhouette with no anatomical detail), she caresses the young man, kisses his neck, he turns over and she climbs on top of him (please see the Violence/Gore category for more details).
► A young woman enters a married professor's office and speaks to him in a suggestive manner, he kisses her, she pushes him away and yells, he kisses her again and she screams repeatedly (please see the Violence/Gore category for more details). An older and married professor kisses one of his students and she rebuffs him.
► A young woman dances at a fraternity party and pulls her top up to reveal her breasts to the crowd of young men that cheer (we see only her bare back); one young man films her (she is drunk and must be helped home). A young woman pretends that she is taking her clothes off outside a young man's room and when he opens the door we see that she has taken off her top and is wearing a lace bra. A young woman showers (her back to the hip and abdomen are visible along with a belly button piercing). Young women wear low-cut tops and dresses that reveal cleavage, bare shoulders and backs in many scenes throughout the movie. A young woman's bare abdomen is visible when her shirt pulls up and a young man looks at her. A young woman wears short, shorts that reveal bare legs in a couple of scenes. A young woman wears a bra and panties (we see her bare abdomen, legs and cleavage).
► A man approaches a young woman filling her car with gas, he touches her hand and then her face and tries to flirt with her (please see the Violence/Gore category for more details). A woman and a young woman flirt and kiss passionately and agree to leave a club together. A young man and a young woman kiss in several scenes.
► A young woman dances at a club and tells her friend to "watch this guy hit on me" when a man approaches and they dance together (it is implied that they leave together). A young man tells a young woman that he will be on kitchen duty if he doesn't get her up to his room (they are at a fraternity party; nothing else happens). A young woman says of herself and two other young women, "We're hot." A young woman says a young man is "really hot."
► Young men and women dance in a party scene and a few club scenes. A beverage is spilled on a young woman at a party and a young man says he did it on purpose to be able to talk to her.

MESSAGE - Roommates can be hard to live with. 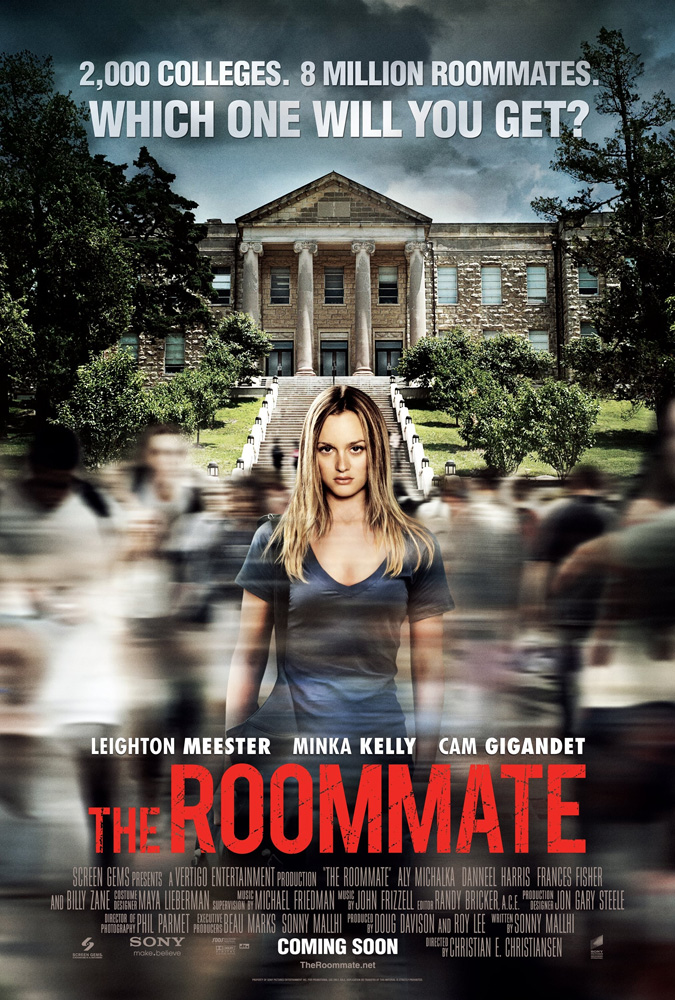