Animated feature about a world populated entirely by robots: Rodney Copperbottom (the voice of Ewan McGregor) is a young robot that dreams of going to the big city and working with Bigweld (Mel Brooks), a robot tycoon who invents products that help make life better. He is disillusioned, however, when he realizes that Bigweld has disappeared and a profit-hungry robot CEO (Greg Kinnear) has taken his place. Also with the voices of Halle Berry and Robin Williams. Directed by Chris Wedge. [1:30]

SEX/NUDITY 3 - A male robot announces that he is going to be a dad, he rushes home to find his wife with a box of parts and she says, "Making a baby is the fun part"; the male then says "Push, push" and the female moans as she pushes against a part, assembling the baby robot. During the assembly the mother robot asks the father robot, "What is that extra part?" and the father says, "We wanted a boy right?"; he then picks up a mallet, and says, "This won't hurt a bit," whereupon we hear a clunk and hear the baby robot cry.
► A round bed with a mirrored ball above it rolls out and the room has dimmed lighting and suggestive music playing. A robot asks another robot, "When did you get oiled last?" and the robot says, "I can't answer that in front of my kid sister." A male robot says "I like women with large..." (talking about a female robot with a large posterior compartment). A female robot calls herself a "gear grinder." A female robot says that a male robot is "cute," and a female robot says of a male robot "What a man." A robot is called "Aunt Fanny" because of her large posterior compartment.
► A male robot falls on the ground, his clothes slip up and it is implied that his private parts are exposed when a female robot faints from what she has seen. A robot wiggles his buttocks at a street sweeper. A boy robot wears girl robot parts that include a female torso, and a robot loses his legs and grabs the first thing he finds to replace them: they are girl robot parts. A robot is stripped of his outer covering and holds his hands over what would be his private parts.
► A male and female robot hug, and a female introduces herself to a male robot and caresses his chest. Male and female robots dance together in a few scenes and one time two of the robots rub noses. A female robot gives a male robot a back massage (he moans).

VIOLENCE/GORE 3 - In a short cartoon preceding the film a squirrel clambers along an ice covered ridge, it slips and swings from its tongue, which is stuck to the ice; it struggles to pull itself up by the tongue, swings up onto the top of the ridge, pulls a nut out of the ice, and water begins to spray from many holes. The squirrel plugs the holes with its paws and its nose, it fills up with water and expands, and then is shot through the air.
► A robot is taken into a chop shop, a blade comes close to his head, he gets caught on a long spring, he falls, he nearly hits the floor, he lands on a conveyor belt and is being taken into the melting room. A conveyor belt in a dark, underground plant takes scrap metal through being hammered, cut up and eventually into a melting room (we see large flames). Robots are frightened when a street sweeper comes along and they say that it picks them up and takes them to the "chop shop." Many robots panic and scramble when a large robot rolls through the street. "Choppers" chew up robots and spit out bolts.
► A robot loses his legs and grabs the first thing he finds to replace them (they are girl robot parts). A robot's top half is shot into the air (it appears to be a test model). A robot taunts a street sweeper, then turns and runs when it chases him. A hatch is opened up under a robot and it falls through.
► Two robots walk through a darkened room. Robot security officers grab a robot, robots are chased by security robots in a few scenes. Robots threaten each other, they fight with punches, kicks and wrestling moves, and one robot picks another robot up on his back, and they spin around kicking many other robots. A robot dances and when he flings his arms and kicks his legs he kicks and punches other robots. Two robots fight with metal pipes, and one robot is tossed into the air, and is caught up in chains and he dangles from the ceiling. A robot hits another robot in the head and its head spins around, and a robot hits another robot on the head twice.
► Two robots travel in a ball that travels along chutes, they are catapulted and flung, we hear them screaming and see them being pushed against the sides of the ball; one robot's eye falls out, he puts it back in, one robot vomits (we hear gagging), the ball is hit with a hammer and sent through the air, and then one robot is hit by another hammer and sent through the air. Three robots are pushed along on a large "sea" of dominoes.
► A robot scratches up the back of another robot with her sharp "nail." A flying robot holds another robot in the air, a bird lands on them and begins pecking at one robot's eye. A robot is stuck to a large magnet and remains magnetized after he gets loose (we see many metallic items of various size being pulled along behind him). Two robots are stuck to a large magnet and another magnet pulls against them.
► A robot panics, bounces around a kitchen breaking plates and knocking things over. A robot breaks a plate, and throws things at another robot hitting him in the head. A barrel filled with ball bearings spills, two robots slip and slide on them, they fall onto the floor, and one robot loses his head (literally). A robot with a large posterior compartment bumps into robots and other things.
► We see many robots being repaired, new parts being attached, and parts being removed, like surgical procedures. Two dismembered arms arm wrestle on the floor.
► A robot introduces herself to a boy robot and says that her name "...rhymes with viper," and then hisses like a snake. A robot says to another robot "Beat me until you are happy" and the robot hits him in the face twice. We hear that a robot has disappeared. A robot talks about destroying another robot. A robot asks, "Who wants to get fixed?" and a robot dog whimpers.
► A robot wears a sign around its neck that says "Got Screwed" and has a screw on his head. A dog stops near a fireplug and the plug says "Don't even think about it." A robot disassembles itself, putting all of its pieces in a box, in order to go through a security check.
► A robot sits on what looks like a toilet and we see liquid draining from underneath him (looks like a urine stream), and he says it's his third oil change that day. Robots make what they call "arm farts." A street light falls over onto the ground (after a robot flatulates) and we see a chalk outline on the street the next day. A robot lays an egg.

MESSAGE - Never give up on your dreams. Upgrades don't always make things better. 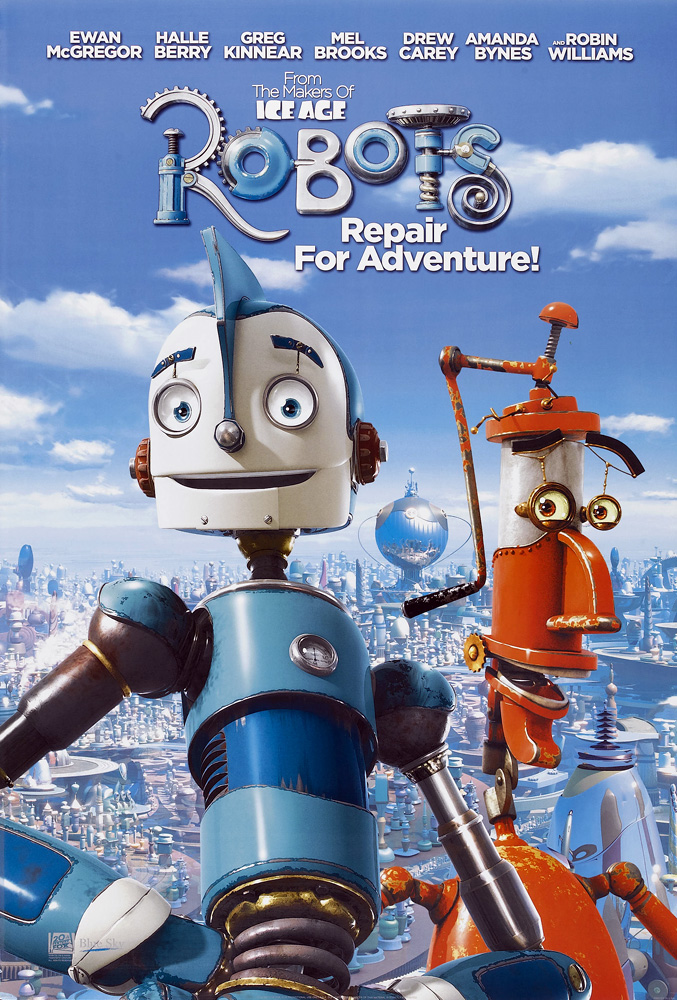