Based on a Cormac McCarthy novel: The world is in ruins after an apocalyptic event and a man and his son (Viggo Mortensen and Kodi Smit-McPhee) struggle to survive and hold onto their humanity while making their way across a wasteland. Also with Robert Duvall, Guy Pearce, Molly Parker and Charlize Theron. Directed by John Hillcoat. [1:53]

VIOLENCE/GORE 8 - Throughout the film, there is a constant threat of danger; there are many scenes that focus on the complete destruction of the planet and reveal burned out forests, abandoned homes and businesses, and lack of food and supplies, and people are shown to be filthy and sickly.
► A man is shown with a burning flare in his chest lying dead on the floor (we see the open hole in his chest).
► Many men with weapons chase a woman and a boy, they are caught, the woman screams, we hear a thud and the screaming stops (we do not see the violence but presume they have been killed and will be eaten).
► A man holds a gun on another man, cocks it, the man being threatened pulls a knife and holds it to a boy's throat, and the man with the gun fires and kills the man with the knife (blood splatters and we see the dead man and blood-splattered boy lying on the ground).
► We see the dismembered remains of a man on the ground (severed head with blood at the throat, and the chest cavity with organs pulled out), implying cannibalism. A boy finds three bodies hanging from a rafter in a barn (we see their feet and then pan up to see that they have bags over their heads). We see many human skeletons on the ground and in a large bin. We see the skeletal remains of a person in a bed. We see many human skulls piled up on the ground. We see skeletal remains of animals and fish on a beach.
► A man pulls an arrow out of his leg, blood pours from the wound, he pours alcohol on it and screams, and he staples the wound closed and screams (we hear each staple). Arrows fly past a man and a boy, and the boy is struck in the leg and screams loudly (we see blood on his leg).
► A man and a boy walk through a dark passage under a house, they find a room with many nude and emaciated people writhing on the ground (one person is missing his leg from below the knee and we see a bloody stump), the people clamber to get to them, and the man and the boy run and hide in a bathroom where there is blood in the sink and a bone fragment. A man lies dead on the ground and has gray-tinged skin.
► A man holds a gun to a boy's head in a few scenes and comes close to pulling the trigger but does not. A man and a boy run through woods while being chased by armed men. A man holds a gun on a man who holds a knife, the man drops the knife, and the gunman forces him to remove all of his clothing and leaves him standing on the side of a road naked.
► We see large patch of ground stained with blood. We see a few people with missing digits (the stumps are closed and healed). A large truck carrying armed men approaches a man and a boy hiding along the roadside; one of the men has blood on his face and another is missing his leg below the knee.
► A man fires a flare gun into a building, we see flames and hear screaming. We hear a loud ruckus with people screaming and sounds of fighting and hatchet blows (captive people are fighting with their captors).
► A man and a boy are trapped when many large trees topple, nearly crushing them (they are both fine). A man and a boy are frightened when they hear something prowling around where they are hiding. A man carrying a knife approaches the tent where a young by is sleeping (the boy is not harmed) and steals all of his belongings.
► A woman tells a man, "They are going to rape me and your son and then eat us." A woman talks about wanting to kill herself and her son. A boy says he wishes he were dead. A man talks about cannibalism. A man talks about dying of starvation. A man talks about hiding from gangs carrying weapons. A man says, "All the animals are dead" and "The planet is dying." A man talks about a woman leaving and dying in the dark. Two men talk about being "the last man alive."
► A man wakes and gets out of bed to investigate screaming heard from outside and we hear noise at the window that suggests a large fire burning (although we do not see anything, calamity is implied). A man wakes to the sound of a huge fire raging close to where he and a boy are sleeping. We hear a deep rumbling and a man says that it's an earthquake. We see a river jammed with fallen trees.
► A pregnant woman's water breaks, we see liquid trickle onto the floor, and we see a bit of blood on her hand and her pants are wet. A man urinates at the side of a road (we see the stream and hear the trickle). A boy vomits (we hear gagging and see goo). A man coughs deeply in many scenes and in a few scenes spits up blood. A man spits out some food that he has just eaten (we see mush and fragments). A man and a boy eat stale crumbs left on a table.
► A boy wakes up with a start from a bad dream. A woman screams loudly during labor and delivery. A boy punches his father on the back when he picks him up and tries to carry him away.

SUBSTANCE USE - A man drinks a few glasses of alcohol, and a young boy asks for some alcohol and his father says no. A man smokes cigarettes in a few scenes.

MESSAGE - Without hope, survival is impossible. 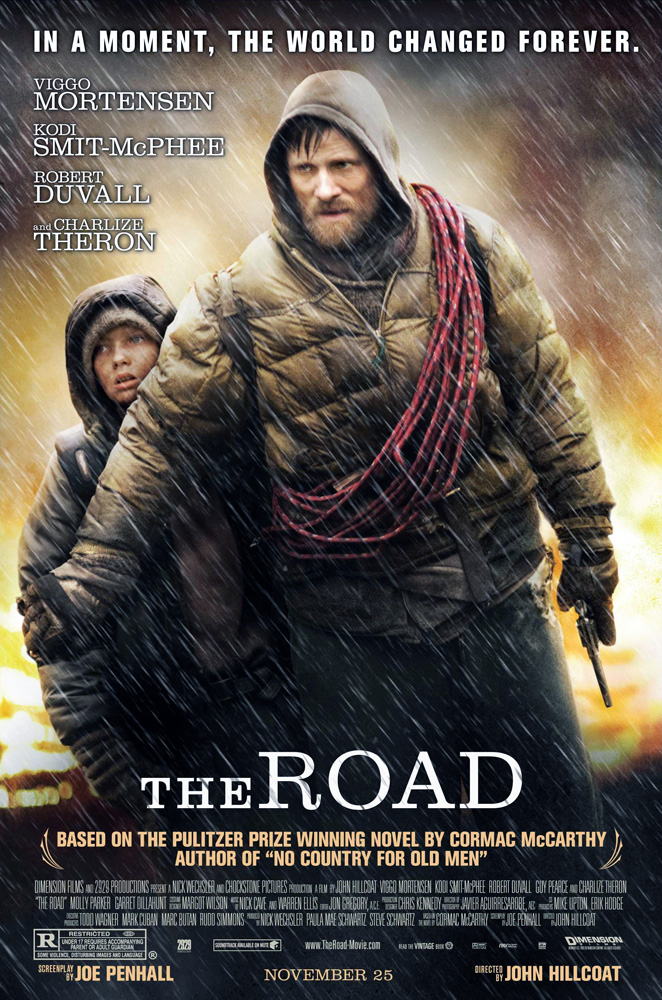