Why is “The Rhythm Section” rated R? The MPAA rating has been assigned for “violence, sexual content, language throughout, and some drug use.” The Kids-In-Mind.com evaluation includes a passionate kissing scene and implied sex, sexual sounds in a brothel, a call girl visits a man for sex, and several cleavage revealing outfits as well as a nude female painting; many scenes of flashbacks and news reporting about a plane crash that killed all of its passengers, many scenes of gunfights, hand-to-hand fights and knife fights that end in death or injury with bloody wounds shown, a car chase, a car explosion with four left dead, and a bus explosion with two left dead; a scene of heroin use, and at least 28 F-words and other strong language. Read our parents’ guide below for details on sexual content, violence & strong language.” After the tragic death of her family in a terrorist airliner bombing, a woman (Blake Lively) is determined track down those responsible and exact revenge. To do that she meets a former spy (Jude law) who teaches her shooting, fighting and survival skills. Also with Daniel Mays. Directed by Reed Morano. [Running Time: 1:49]

– A man and a woman kiss passionately while standing against a wall and it is implied that they have sex. A woman lies on top of a man and he pushes her head toward his crotch, she struggles and remains at his face (please see the Violence/Gore category for more details) and she holds a knife to his throat as he pleads with her not to kill him. We hear sexual moaning behind closed doors in a brothel.
► A painting of a nude woman is shown in the background of a scene (bare breasts, abdomen, pubic hair and full legs are visible). A woman enters a room where a man is waiting and she asks him for money upfront; he says that he just wants to talk (implying that this is a brothel); she is wearing a T-shirt and when she leans over we see her bare buttock from the side (please see the Violence/Gore category for more details). A woman tells a man, “You can’t have sex with men,” and he replies, “That’s a relief.” A man tells a woman to take off her clothes and swim across a lake; she does and we see her wearing bra and underwear that reveal cleavage, bare abdomen and legs to the hips. A woman wears a low-cut T-shirt that reveals cleavage. A woman wears a low-cut top that reveals cleavage in a few scenes. A woman is shown wearing bra and underwear (we see cleavage, bare shoulders, abdomen, legs and partial buttocks/hips). A man wears an open robe that reveals his bare chest and when he removes the robe, we see his bare chest and abdomen. A woman removes her coat and we see her wearing a skimpy bra and underwear (cleavage, bare abdomen and legs to the hips are shown, as well as hip flesh through straps on the sides of the underwear).

The Rhythm Section SUBSTANCE USE

– A woman looks at heroin in a piece of foil and walks away and then later returns to use it, a woman buys drugs from a man in what looks like a pawn shop, a woman says that she is not an addict but we see her seemingly going through withdrawal, and a woman injects a man in the back with a syringe of poisonous snake venom. People drink wine and beer at a family dinner, a man drinks a beer in his apartment, a woman drinks vodka, a man drinks a glass of wine, and people drink in a bar scene. A woman asks a man for a cigarette and he does not have one, and a woman smokes a cigarette in a man’s apartment even after he tells her not to.

– Revenge is always a deadly game. 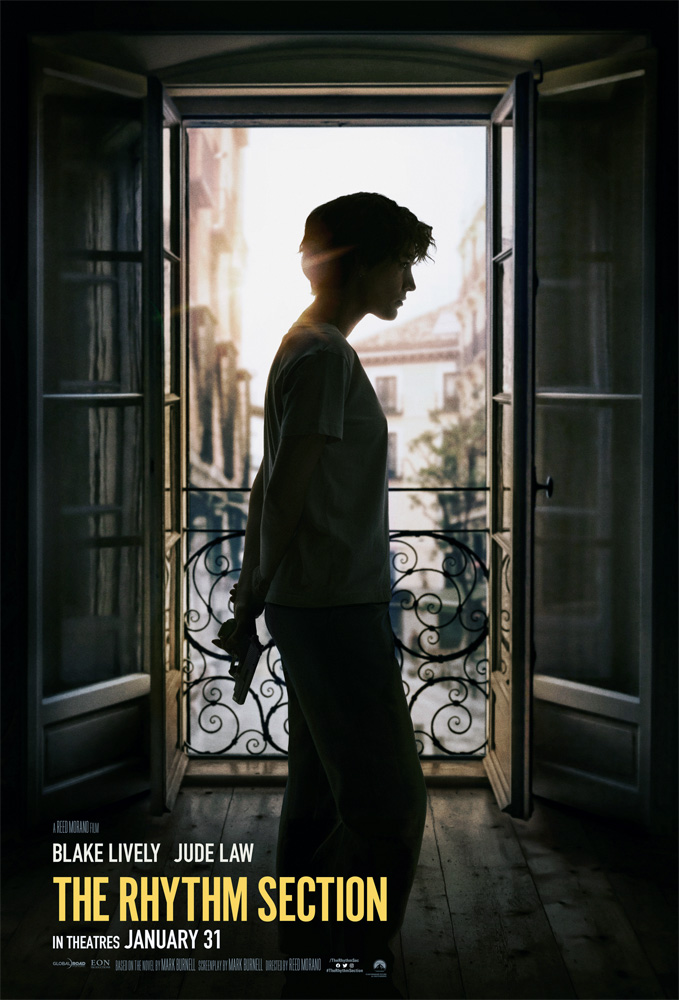