Based on the Comedy Central series: A group of incompetent officers from a Reno police department travel to Miami Beach for a convention, and after arriving they have to snap into action when the convention center is attacked by bio-terorists and all of the other officers are inside and quarantined. With Robert Ben Garant, Thomas Lennon, Niecy Nash, Mary Birdsong and Cedric Yarbrough. Directed by Robert Ben Garant. [1:24]

SEX/NUDITY 7 - A man and a woman have sex: we see thrusting, kissing, caressing, bare breasts, bare buttocks, bare backs and abdomens.
► We see, through a motel room window, a man masturbating: his arm is moving rhythmically, and another man is shown masturbating, then another and then a woman (the woman is shown in modest underwear).
► A woman wearing only bikini bottoms (her bare breasts are clearly visible through this entire scene) runs toward two men in a panic.
► Two scantily clad women dance suggestively in front of two men. A woman wearing a short negligee (revealing cleavage and bare buttocks) tries to seduce a man, but he declines her invitation.
► A man wears tight-fitting, short, shorts throughout the movie. A nude man sits on a chair (we see bare buttocks and back), and two men trying to get themselves out of a sticky situation begin to do a striptease, and they get down to their underwear (one is wearing a thong and his bare buttocks are visible).
► A woman wears a tight-fitting wet T-shirt that accentuates her breasts, a woman wears a thong swimsuit that reveals her bare buttocks, a woman wears a skimpy swimsuit that reveals cleavage and her bare abdomen, and a woman wears low-cut and tight-fitting tops in every scene that she is in. Several women in skimpy outfits stand near military and police vehicles at a convention.
► A woman opens a canister containing a bio-toxin, and she and the other people in the room are then shown being scrubbed down and sprayed (we see one woman's bare buttocks and the bare chests of the men).
► A woman pleads with a man to have sex with her, the man puts his hands on her clothed breasts, they move close to each other, nearly kissing, and the scene ends. A woman sleeps on a man's shoulder with her hand resting in his lap and she says she was dreaming that she was driving in the Daytona 500 (the man is alarmed and pushes her away). A woman is clearly romantically interested in a man and tries to convince him to have sex with her in several scenes, and she tries to kiss him but he pushes her away.
► A woman is on her hands and knees on a bed, wearing a bra and panties, and complains when a man whose hand is by her crotch tries to free himself (she tells him that his watch is caught in her pubic area). A man opens a motel room door and sees another man inside wearing a candy thong, and he invites him in.
► A man sleeps on another man's shoulder (one appears to be enjoying it while the other is upset), and a man sleeps with his head on a woman's clothed breast.
► Men and women dance together in a bar.
► Two men watch women walk by them, and the men make gestures and remarks toward them. A woman talks about a man making "sweet dirty love to her all night." People tell a man that they have arrested his son several times for performing oral sex. A man talks about a police department having a zero tolerance policy against homosexuals.


VIOLENCE/GORE 5 - A man drops a live grenade, he tries to pick it up, kicks it into a tunnel, goes after it, it explodes, and blood sprays out of the tunnel and on people standing nearby.
► A man wades into a pool with an alligator, the man slaps the alligator on the tail and then on the head, the alligator does not move, but another alligator lunges out of the water and pulls the man under (the pool water turns red).
► A man is shot, we see blood splatter on the wall behind him and smear as he slides down to the floor. A man is shot in the arm while demonstrating a bulletproof vest (we see a bloody hole in his sleeve).
► We hear that a convention center filled with over 2,000 law enforcement agents has been bio-attacked (the attackers also claim to have a nuclear weapon) and that an antidote must be found or they will all die.
► Two men put bags over two other men's heads, force them into a van, and we see them later tied into chairs on a yacht; they are questioned and forced to watch as another man is weed wacked in the face (we see the man thrashing but do not see blood or gore). Two men are covered with bags and taken to a yacht, where they are forced to watch as a man pours gasoline over another man and threatens to light him; however, instead he lights himself on fire (he jumps over the side of the yacht and into the water).
► A woman accidentally fires a missile from a helicopter and a car with a man in it explodes.
► A man fires his gun in the air and around several people until he escapes, and they fire back at him (no one is injured). A man fires his gun in the air at a crowded party, and many of the party goers then hold their guns on the man. A man holds a gun on several people.
► People on golf carts chase another man, also on a golf cart, and they shoot back and forth at each other, and break through fences. A man shoots at a helicopter, the helicopter shoots back, and a truck is struck and it explodes.
► A man and a woman prepare to wrestle in Jello and the man punches the woman in the face, knocking her down. A man approaches a woman who's struggling to open her motel room door, and she screams and tasers him on the chest. A woman slaps a woman in the face.
► A whale carcass is blown up on a public beach, and bits of the whale land on people standing around (we see bloody and gooey bits). Several people try to push a dead whale off a beach, and one man breaks through the rotting carcass and comes back out covered with slime and goo. A woman vomits on a man repeatedly (we see goo splattering him).
► A woman opens a canister containing a bio-toxin, and she and the other people in the room are then shown being scrubbed down and sprayed. Two men are thrown over the side of a yacht into water.
► Several police officers surround a chicken standing in a road, one officer fires his weapon accidentally, and another tries to hit the chicken in the head with his gun (it discharges nearly striking him in the foot). In a dream many military and police vehicles surround a building and SWAT teams drop from helicopters.
► A man yells at several people.
► A man drives through a Porta Potty spraying blue liquid all over his windshield (we hear that no one was in the facility). Cars crash into each other in a few scenes.
► A woman has a severe sunburn on her back.

SUBSTANCE USE - A woman snorts cocaine repeatedly in a few scenes. A man guzzles the remaining alcohol from a bottle, a man drinks a beer, people drink alcohol and smoke cigarettes in a few bar scenes, and a man driving a bus drinks alcohol from a flask and smokes a cigarette. People smoke cigarettes in several scenes. We see a dead woman on a stretcher and hear that she died from a cocaine overdose. A man talks about "dealing blow."

MESSAGE - Even the most incompetent people can sometimes save the day. 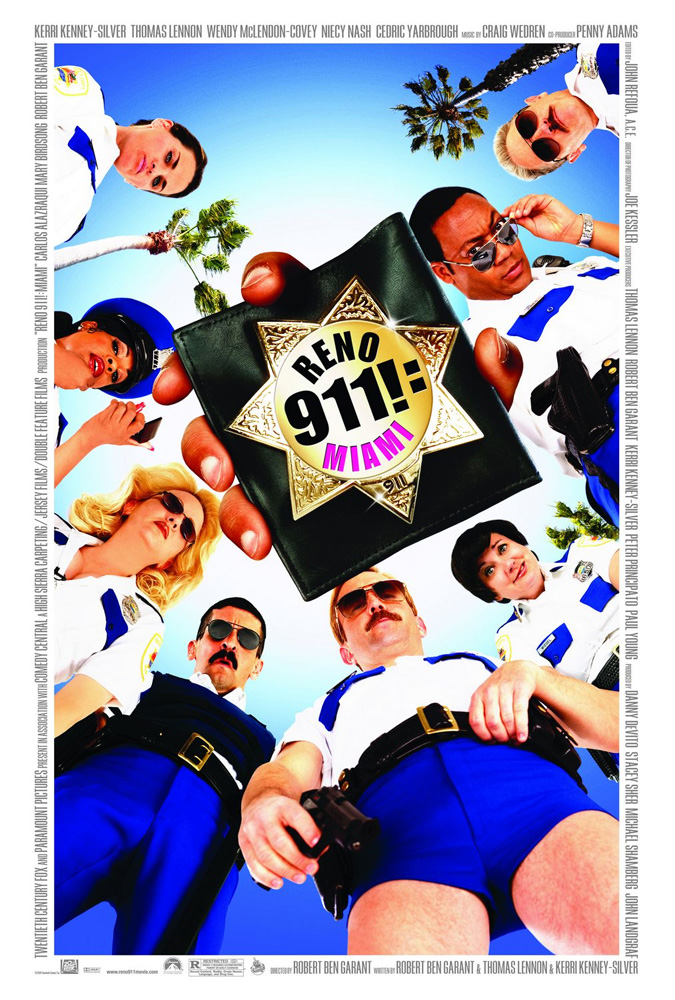