Hilary Swank stars as an ex-missionary minister who uses reason and science to debunk supernatural events. When she's called to investigate strange happenings, such as frogs falling from the sky and swarms of locusts, in a small Southern parish, she discovers that at the center of the plagues is a 12-year-old girl. Also with AnnaSophia Robb, David Morrissey, Idris Elba and Stephen Rea. Directed by Stephen Hopkins. [1:38]

SEX/NUDITY 7 - A man and a woman have sex in an extended scene: we see thrusting, passionate kissing and caressing, and non-distinct bare flesh.
► A woman remembers having sex with a man and we see the man's bare chest, and we see him thrusting and we hear them moaning.
► A woman wears a low-cut dress that reveals cleavage in a few scenes.
► A girl has a trickle of blood on her leg and a woman tells her that that is her body's way of telling her that she is becoming a woman.

VIOLENCE/GORE 7 - A woman shoots herself in the head (we hear the gunshot after she puts the gun in her mouth and we see her slump against a wall).
► A man finds the bodies of several children hanging in a crypt (they are tied at the wrists, and several have bloody faces), and a pile of skulls in a corner. A girl finds her dead mother on the floor, and blood seeps and pools around the girl's feet. A woman finds a man lying dead on the ground (he has blood on his nose).
► A woman hears something crashing into doors and windows, she opens a door and sees locusts covering the ground, police try to shoot at them, and they are attacked by the locusts and several are killed (we see them with slashes on their faces).
► A woman has a vision and sees a boy chasing a girl, raising a dagger over her, and cutting her on the chest; the wound heals itself, and then the boy begins to decompose and falls dead into a river.
► We see a badly decomposed body on a morgue table. We see several dead bodies with boils on their faces and bodies. We see a body in a tomb and we are told it has been dead for 40 years, although it looks newly dead.
► A woman chases a girl through thick woods, she finds herself walking through a hospital, she finds her dead daughter lying on a table, she grieves, and she imagines herself being killed by a man with a machete (she spits blood after being stabbed in the abdomen and we hear a crunch).
► A man strikes a man on the back of the head killing him.
► Many cattle lie dead and dying on the ground, we see another large pile of dead cattle and watch as they are loaded into a hole where they are burned. Many dead frogs fall from the sky. A dead bull is dragged away by a tractor.
► Many people are struck by flaming bolts and they float upward into the column of flames and then there is a large explosion.
► A woman leans in to take a photo of a fungus and a girl reaches out to her, the woman is startled, falls back on the ground and strikes her head (she sees flashes of a boy dying, falling into river water and a stream of blood seeps into the water). We see a river with blood-red water and many dead fish floating on the surface.
► Many people gather in a town and prepare to find and kill a 12-year-old girl. A man holds a knife to a woman's throat and threatens to kill her. A woman finds a sacrifice altar with a metal table and has a vision of a girl being held on the table and a boy raising a dagger over her.
► A girl screams and attacks a woman, she bites the woman's hand, and the woman yells and falls to the floor.
► A man dissects a frog (we see the frog with its chest cavity splayed open and internal organs visible). A man talks about his wife seeing something that seemed butchered in a sink, but it was not dead; it is suggested that it was part of a sacrifice.
► Something shoves a truck, it nearly drives off the road, it nearly overturns, we hear a gunshot and see a bull, dead on the ground (bloody bullet wounds are evident) and with a horn through the truck door.
► A man and a woman walk through a sewer, they find red water in the drain and dripping down the walls, and the woman climbs a ladder into a room where she is grabbed by several men; she is not harmed and she discovers many barrels of toxic waste.
► A woman flashes back in several scenes to a time when she worked in a field hospital where her husband and her child died. A woman walks through a narrow passage where many sick people are lined up waiting to see a tomb that has been opened and the body of a man who has been dead for 40 years is visible.
► A girl has a trickle of blood on her leg and a woman tells her that that is her body's way of telling her that she is becoming a woman.
► A woman walks through a dark house, she reacts to the smell of rotting food and sees large bugs crawling on a table; she is startled when she turns and sees a girl standing near her. A man grills food, turns away from it and when he turns back the food is covered with slithering maggots and flies buzz around it. We see children's heads being shaved and we see lice skittering around on their scalps. A priest sees many flies swirling and buzzing. A woman cracks an egg into a pan and it comes out blood red.
► A man is awakened by a noise, he sees a photograph of a woman on his desk smoldering and when he finds other photos of the same woman her face is blacked out in each one. We see a stained glass window with pictures of men tied to stakes and being burned. A boy draws a picture of dead cows and a girl with what looks like a flash of light around her; the boy talks about the girl appearing before the cows started to die.
► We hear about a boy dying, his 12-year-old sister being blamed for murdering him and the river in the town becoming blood-red since the boy's death. A man talks about his wife dying of cancer. We hear about the hallucinatory effects of a chemical, when ingested. We hear that a family worships Satan and conducts strange rituals with sacrifices.
► Many bolts of flame shoot down from the sky and strike the ground repeatedly.

SUBSTANCE USE - A man and a woman drink moonshine and people drink beer.

MESSAGE - Some things cannot be explained by science. 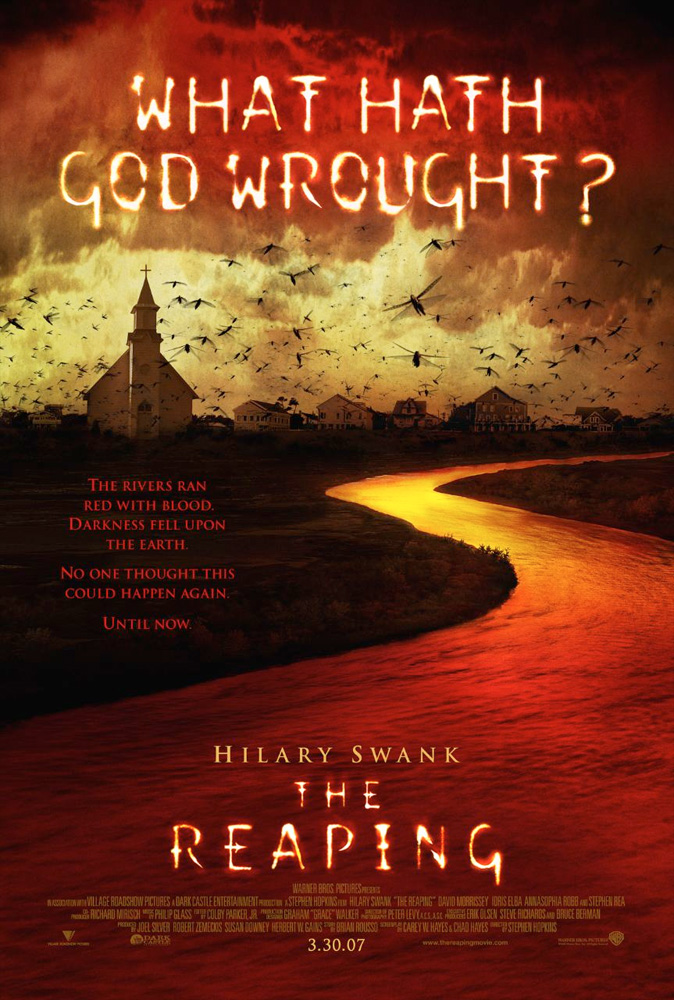