In this animated feature, a young rat is dissatisfied with the culinary choices available in the sewers he inhabits with other rats, and starts exploring Parisian restaurant kitchens and reading the cookbook of a master chef. Eventually he befriends a young man who wants to be a chef but doesn't know how and together they are able to create wonderful dishes that take the Paris dining scene by storm. With the voices of Patton Oswalt, Ian Holm, Lou Romano, Brian Dennehy and Peter Sohn. Directed by Brad Bird & Jan Pinkava. [1:51]

SEX/NUDITY 2 - A man and a woman kiss, and a woman and a young man kiss in a few scenes.
► A woman confesses that she likes a young man and he tells her that he loves her. A woman talks about someone "messing around with" a man's daughter.
► We see a young man's bare chest when he lifts his shirt to show scratch and bite marks from a rat. A young man tries to find a place to hide a rat, that includes putting it down his pants (we see the waistband of his underwear).

VIOLENCE/GORE 3 - A woman with a shotgun shoots repeatedly at two rats, many holes are blown in the house and furniture, the ceiling collapses and a huge number of rats pours out; the rats scurry and run, the woman follows the rats and continues shooting at them, the rats sail away on small makeshift boats, and one rat is separated from the others.
► A woman aims a gun at a man, the man grabs the woman's arm, they struggle and the gun fires but no one is struck.
► While hiding under a young man's shirt a rat scratches and bites him repeatedly; the man swats at it and thrashes around (we see red slash marks on his chest and abdomen later).
► A woman slaps a young man hard in the face. A woman raises her hand to strike a young man but does not.
► A rat falls through a skylight and into a dishpan in a restaurant kitchen, the rat jumps out of the dishpan, lands on the floor, is nearly stepped on and rolled over, an oven is lit and the rat runs as the flames shoot out of the oven bottom, falls into a pot and is nearly boiled, and falls into a roasting pan and is nearly roasted.
► A rat falls on a street and is nearly struck by many cars: people walking on the sidewalk kick and stomp at it (it is not injured). A man swings a mop handle at a rat, another uses a hatchet, and a young man catches it in a jar.
► A man on a scooter chases a rat through streets: the man drives down stairs, the rat jumps into a tree, then into the air and lands on a boat, and the man follows, missing the boat and landing in the water.
► A store window has a display with many rats whose heads are stuck in traps, and other rat killing items including poisons. A rat is trapped in a cage-like trap (it is not injured) and locked in the trunk of a car.
► Two men are bound and gagged and locked in a food pantry by rats.
► Several people with knives move toward a rat (they are stopped). A young man takes a rat in a jar to the river and plans to throw it in to kill it.
► A pack of rats chases a man, clamber onto his car, and he tries to drive away but crashes. A man on a bicycle crashes into a parked car.
► A rat carries a cheese knife and walks toward a noise coming from a shadow and another rat jumps out startling it. A rat is frightened and worried when it finds itself alone in a strange place.
► A rat smokes a mushroom over a chimney, and with another rat they are struck by lightning, thrown from the roof and to the ground (they have electrified fur but are otherwise OK).
► A dog barks incessantly at a rat. A man yells at and is repeatedly insulting to a young man and other staff members in a kitchen. A woman threatens to kill a young man.
► A blindfolded young man uses a knife to cut and chop food and cooks while a rat controls his movements.
► The floor of a man's room is shaped like a coffin. A young man imagines a man telling him that he'd like to order his "heart roasted on a spit." We hear that a man died after receiving a bad review from a food critic. A man talks about having killed someone with his thumb, and a woman talks about several other men and their dangerous backgrounds (being in prison, and being mysterious).
► We hear explosions and see flashes of light coming from inside a house and a rat crashes through a window. A young man flips a crepe out an open window and we hear a traffic accident in the street below. A rat pulls a young man's hair to control his movements.
► A young man tastes a soup and vomits out of a window (we hear him gagging). A woman sees many rats working in a kitchen and nearly vomits. A rat finds rat poison among the garbage that other rats are eating from, and stops them from eating any more.

MESSAGE - Anyone can cook given the opportunity. If we are what we eat we might as well eat the good stuff.

(Note: A short preceding the feature and entitled "Lifted" includes the following scenes: A sleeping man is pulled back through a window with his bottom first and becomes wedged in the opening -- a small part of his bare buttocks is visible. A large flying vessel crashes onto a house where a man sleeps, when the vessel lifts off again the house is gone -- we hear the man scream when his alarm rings and he apparently falls out of bed (we don't see him fall). A beam lifts a sleeping man into the air, and he is slammed into a couple of walls and the ceiling -- the man continues to sleep. A sleeping man in a beam of light is lifted into a flying ship and then dropped, and the man falls toward the ground but is caught before landing. A small alien creature cries when he has failed a task.) 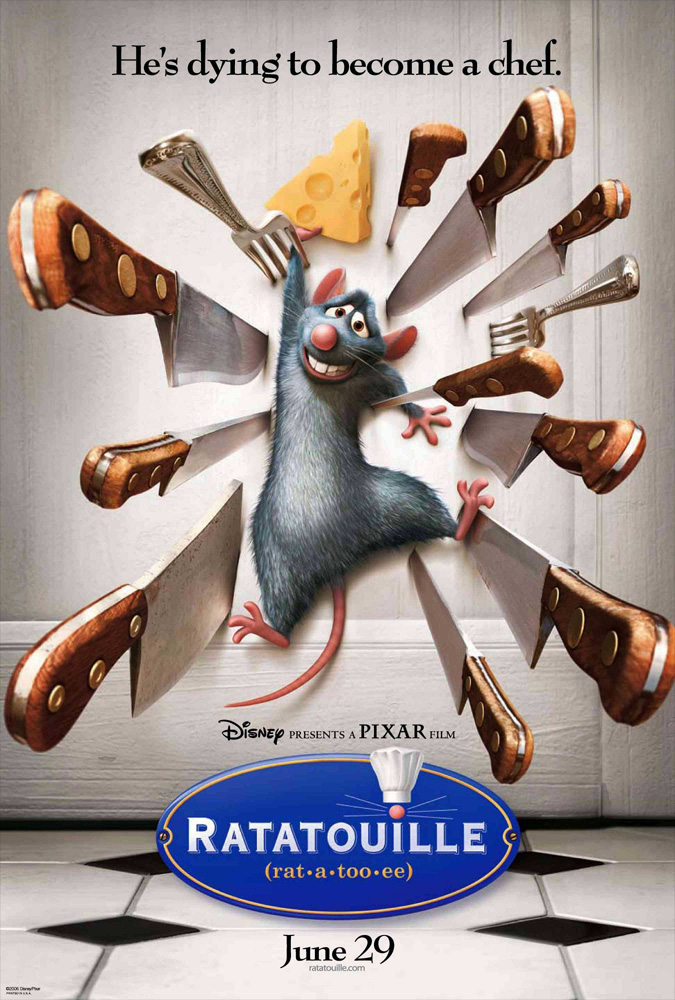