In a land of fairy stories an orphaned kitten (voiced by Antonio Banderas) is taken in by a kindly woman (voiced by Constance Marie). He earns his boots as an award for bravery in the village, but as he grows up, he is tricked by a greedy Humpty A. Dumpty (voiced by Zak Galifiakis) into becoming involved in a bank robbery and the cat must flee as an outlaw. Also with the voices of Billy Bob Thornton, Amy Sedaris, Salma Hayek, Walt Dohrn and Guillermo del Toro. Directed by Chris Miller. [1:30]

SEX/NUDITY 2 - Four times, a male and a female cat dance Spanish dances while winking at each other; the last time, they appear to kiss behind his large hat when he dips her and leans close (we cannot see the kiss).
► A non-speaking female cat sighs with wide open eyes as a male cat leaves the room, suggesting romance, and two empty milk bottles and fish bones are seen lying on the floor, suggesting a cat "date." A female cat flirts continuously with a male cat, batting her eyes at him, curling her tail around his neck, purring and smiling. A male cat flirts several times with a female cat, purring in a deep voice and winking at her. In a cat dance club, a male cat winks at female cats and blows kisses at them causing some to faint. A male cat attempts to kiss a female cat and kisses a baby bird instead. A woman's husband asks her to have a baby twice, mentioning their biological clock, but she refuses, telling him to pretend their baby wild boars are their children.
► An egg shouts "Gonads!" as he slides down a hill and is stopped when he hits a golden egg between his legs. A cat asks his girlfriend if he is handsome as a stallion, and a tiger and she agrees with a smile. Three times, a male cat calls a female cat "bad kitty," implying sexy. A female cat tells an egg in a golden egg costume that he has no underwear on and the egg replies that he does not need any. A cat announces that he is known as a lover of women and a great lover.
► A woman is always fully clothed in a floor length dress, but has disproportionately huge breasts. Twice we see an animated man's chest briefly. A man folds a diaper over the stomach of a baby boar. In a long shot we see a man's pants fall down and knee-length underwear are visible.

SUBSTANCE USE - A prison guard asks a cat prisoner why he has a snuffbox of catnip and the cat replies, "It's for my glaucoma" (suggesting marijuana). A bartender pours liquor from an unlabelled bottle into a glass and we see one customer drink from a wine or liquor bottle four times, two cats and an egg build a catapult with a champagne bottle and a rope tied to the cork and when the cork pops we see a stream of champagne and a cat says "Cheers!" and an outdoor scene around a wagon shows a man and a woman with glasses of champagne after they pop a bottle's cork and liquid streams out (no one drinks). An egg and two cats are carried into the clouds by a huge beanstalk and speak in high voices as if they breathed helium and we hear that it is because of the thin air.

MESSAGE - Bullies can redeem themselves and outlaws can become heroes. 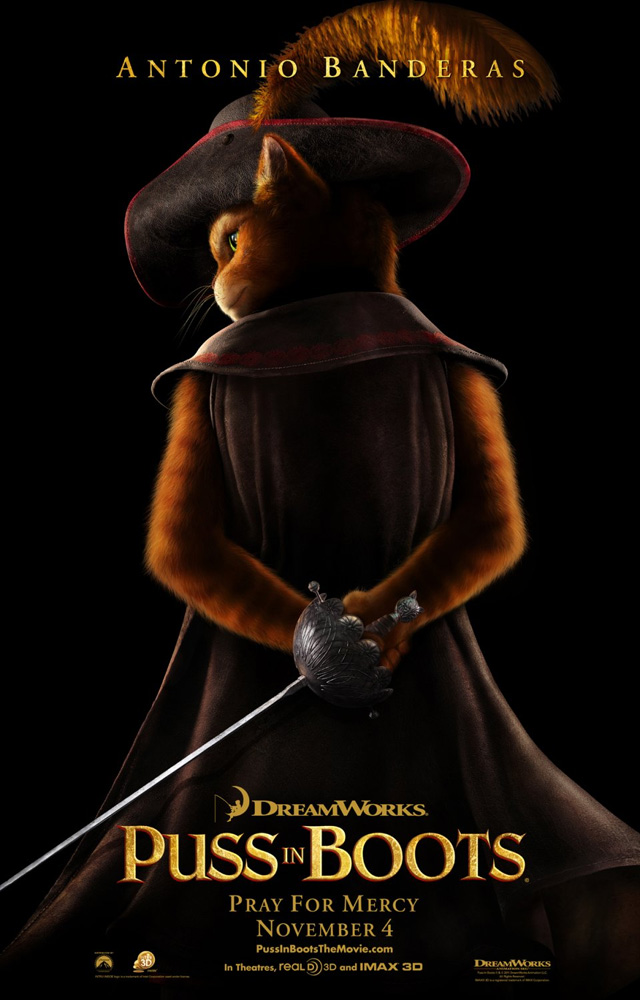