Why is “Poupelle of Chimney Town” rated PG? The MPAA rating has been assigned for “violence, some action and thematic elements.” The Kids-In-Mind.com evaluation includes partial nudity in a bathing scene, a few fights with bruises and a bloody nose shown, several scenes of encounters and fights with armed guards leaving some guards and people unconscious without blood visible, several scenes of risky actions like speeding in a mine car, negotiating the inside of a garbage incinerator and handling explosives, and some name-calling. Read our parents’ guide below for details on sexual content, violence & strong language. Animated tale about a young boy (voiced by Antonio Raul Corbo) living in a small town where chimneys churn out black smoke that covers the sky, all day, every day. The boy believes that there are stars in the sky after hearing his father’s (voiced by Stephen Root) stories that they do exist and he will stop at nothing to see them. He is helped by a magical being called The Garbage Man (voiced by Tony Hale). Also voiced in the English version by Misty Lee and Hasan Minhaj. Directed by Yusuke Hirota. [Running Time: 1:40]

– A boy and his father are shown bathing and we see their bare backs and buttocks. A woman wears a low-cut top that reveals cleavage.

– A man punches another man in the face and several others attack the man that did the punching (we see him with bruises on his face and a trickle of blood on his nose in a few scenes). A boy punches a being repeatedly and breaks some of his pieces off while yelling. Armed guards try to grab a woman out of her wheelchair and other people attack the guards to make them stop (we see several lying on the ground seemingly unconscious); we hear splatters when people are stuck without blood evident. A bat attacks a guard in the face. A man is grabbed by armed guards, and he is beaten and kicked while he is on the ground.
► A being runs from armed guards and hides in a dumpster, the dumpster is emptied into a giant collection vehicle and taken toward an incinerator; a young boy hears the being calling for help and chases the vehicle, climbs on it, struggles to pull the being out, screams when he sees what it is and throws cans at it; as they approach the incinerator the boy and the being jump onto a cable, dangle from it until it breaks and they swing around, fall and land among spinning cogs and machinery, and a wrecking ball hits them and they fall (they seem unharmed). A being thrashes and moans. A boy falls off a ladder and a man catches him. A man becomes enraged, his face turns red, and his eyes become bloodshot. Something large moves through water, people panic thinking it is a sea monster and a large ship runs aground; we see the ship and people talk about having sunk that vessel.
► A giant balloon pulls a boat out of the water and high into the sky, the wind blows them around erratically and children on the boat are tossed around. Several people build a system to shoot gunpowder into the sky and blow holes in the clouds that cover it. Explosives are lit and sail away attached to balloons; they are blown back toward a large ship that is nearby and a boy tries to release them so the ship won’t be blown up.
► A young boy and a being fall into a mining cart and speed along a track, they scream, they speed through a wall of water, they pass a cat that screeches at them, they pass through many bats that flutter around them, and tip side-to-side when the track is broken in places. A man drills a hole in a wall, places an explosive and detonates it blowing rubble around the area.
► A glowing orb bounces through the air and off buildings, it transforms into the shape of a human heart, spins around like a tornado cloud, picking up ransom objects that take the shape of a being with two legs and two arms, and a head with a hook for a nose, and it roars like a monster. A boy covers a being with a large burlap sack and walks him on a leash to hide its identity. A being breaks into pieces and falls to the ground where a glowing orb pops out and sails into the sky.
► People talk about attempts to deepen townspeople’s fear of the ocean and anything outside their town. People tease a being for the way it smells and that it can’t take off its costume because it is a real monster and a girl screams, “Get away”; armed guards search for the being and call it a heretic that must be destroyed. People refer to “Inquisitors” coming to get townspeople if they are out of line and we see them marching in groups with guns. A boy asks a being if he will be his friend. We hear reports of a suspicious man wearing garbage. A woman in a wheelchair coughs and appears ill in a few scenes. A man trembles and says, “Monsters scare me.” A boy trembles when he climbs ladders in a few scenes and he says that he is afraid of heights. People talk about their ancestors and that they protected the land for the next generation. Several threats are made toward people saying, “They will be eliminated.” A boy says that he dropped a bracelet that was special to him in water. A boy asks a being, “Please don’t stand out. I can’t lose any more family.” A being tells a boy that they can’t stay together and the boy cries. People talk about lives being ruled by money. We hear that a type of money that rots over time was developed to make people less reliant on it. A woman says of her husband, “When he was angry, he punched people.”
► People wearing costumes dance in a street celebrating Halloween and there are a couple of references to scary things. A town is shown with a completely smoke-covered sky from the many chimneys that churn out smoke. A being is shown to have a green vapor cloud around him and people remark about his odor.

Poupelle of Chimney Town SUBSTANCE USE

– A man drinks from a bottle in a bar, a woman talks about her husband always being out late drinking, and two men are shown drinking in a bar (one seems to be inebriated).

– The destruction of the environment, friendship, the death of a parent, secrets, questioning authority, fear of heights, doubt, myths, chaos, greed, tyranny, oppression.

– Save the environment and don’t turn away from the unknown. 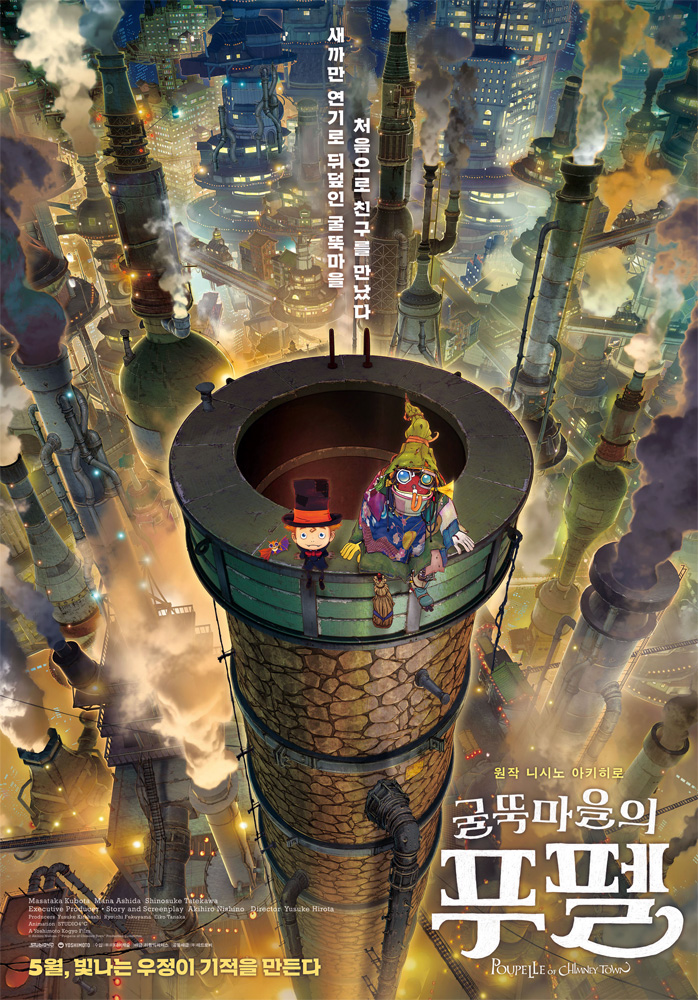