Director Morgan Spurlock turns the camera on himself once again in a documentary about the branding, advertising and product placement that we find in movies and television. Also with interviews with Noam Chomsky, Ralph Nader, Brett Ratner, Antonio Reid and Jimmy Kimmel. [1:30]

SEX/NUDITY 4 - A man explains to several men and women, while showing them illustrated storyboards, that juice has been proven to assist men with erectile dysfunction; he then shows them an illustrated picture of himself with a visible erection under his pants.
► We see brief clips of the following: two men sitting next to a woman, both rubbing her legs and one appears to be licking her face; two women rubbing a man's partially bare chest; the shirtless chest of a man; a woman wearing a string bikini, with her bare torso and cleavage visible before a man wraps her in a towel; a man and a woman kiss; and three young women are seen sunbathing in bikinis and cleavage is visible. An older man's shirt is seen partially unbuttoned, a portion of his bare chest is visible and his hand rests on a woman's thigh.
► We see still photographs of the following: two shirtless men; a man kneeling with a woman's arms draped around his waist and legs; and a woman wearing a bra.
► A man's bare chest, obscured by advertisements and with a placard covering his crotch, is seen on print ads, including on coffee cups, in-store promotions, on pizza boxes, DVD boxes, and posters. A man's bare chest and back are visible as he walks around with a towel tied around his waist. A man is seen in a bathrobe; no nudity is visible. We see a portion of a man's upper chest and a boy's chest when they are shown in a bathtub. Two male toy figurines are depicted shirtless.
► A man explains to several men and women, as he shows them storyboards, that he had envisioned women with breasts stacked on top of one another, rather than side-by-side and we see an illustration of two women with their (covered) breasts stacked on top of one another.
► A man jokes over the phone with another man and a woman that a portion of the film is going to be shot with him in the bathtub, soaping up his hair, then the hair of his son, also in the bathtub, and then a horse standing in the bathtub. During a phone conversation, a man jokes that a movie would be made with nudity. A man jokes that nudity in a film would be the only way he would see it. A man jokes with another man that something is going to be "Hot like a wet T-shirt."

VIOLENCE/GORE 1 - We see clips of the following: a man driving a car and the passenger whips forward as the driver crashes into the side of another car; a man being shot in the chest, and falling to the ground with a small amount of blood on his chest; a man being hit in the head by a television flying through the air; and a robot flying through the air is struck by bullets, it is unfazed, lands on the ground and sets a building on fire with a jet of fire from its hands.
► A man shows another man an illustration of a man with a crown of thorns on his head.

SUBSTANCE USE - Throughout the movie we see advertisements including posters, commercials and photographs of alcohol, and a man jokes that his self-identity is as an alcoholic. We see an animated camel and cowboy smoking cigarettes while we hear a man's conversation with another man about having a smoking cowboy and camel featured in a movie.

MESSAGE - The marketing of products in movies and television is pervasive and actually relatively transparent. 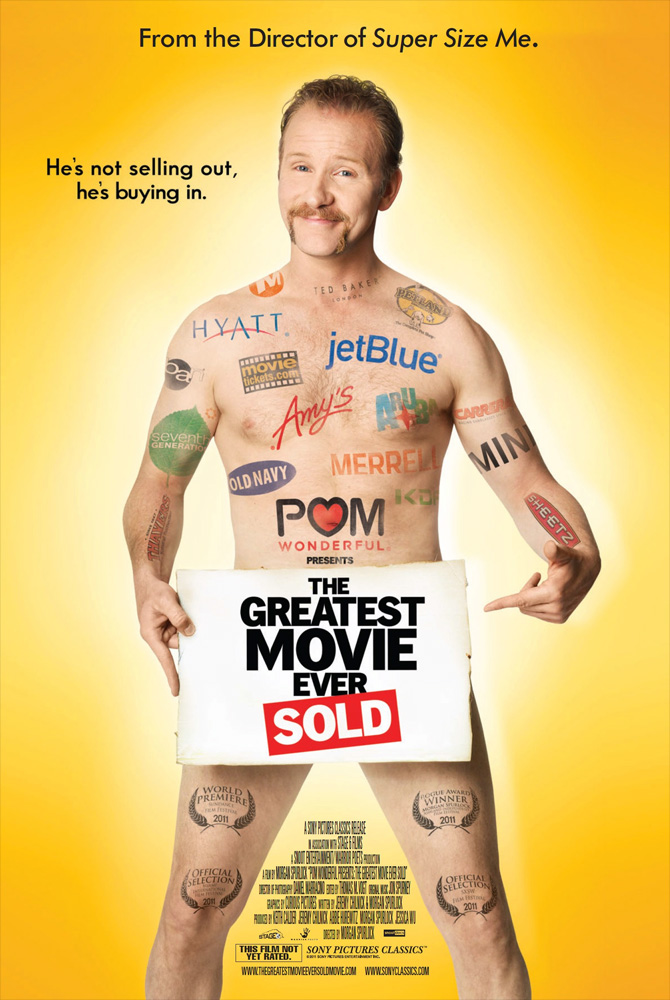