Approximately 15 years after a gruesome murder several teens decide to do a school project about the event. As they begin to uncover some shocking facts about the murders, they also reveal what could be the mysterious motive. With Johnny Pacar, Toby Hemingway, Ambyr Childers, Jennifer Missoni, Jonathan Keltz, Alessandra Torresani, Christian Slater and Luke Bonczyk. Directed by Michael A. Nickles. [1:38]

SEX/NUDITY 7 - A teenage girl comes to a police officer's house wearing a very short dress and asks if she can come in, she tells him that she knows he watches her and that she likes it, she pushes him into a chair, unbuttons her dress and rubs herself against his thigh; she places his hand on her clothed hip, puts her finger in his mouth and unfastens her bra (we see her upper abdomen along with her panties and upper thighs) and they are interrupted by a phone call.
► We see video of several teen girls in a gym locker room in various stages of undress: one young woman is shown wearing panties and we see her bare breasts, another is shown bare-breasted while wrapping herself with a towel, a few others are shown with towels wrapped around them and one is shown wearing bra and panties. A woman pulling herself across a floor is shown wearing panties and her top is open revealing her bare breasts (please see the Violence/Gore category for more details). Three teen boys pull down their pants to reveal their bare buttocks at a party. A young woman wears a low-cut T-shirt that reveals cleavage in a few scenes.
► A police officer is shown watching a video of a girls' locker room where teen girls are shown undressing and he caresses the screen when a particular girl is shown; the man leans back in his chair and appears to be unfastening his pants (masturbation is implied). A man watches a video of a bra and panties hanging from a clothesline, and then of a young woman wearing a bra and panties while putting on makeup.
► A young man kisses a teen girl on the tape that is covering her mouth. A teen boy and a teen girl kiss in a few scenes. A teen boy kisses a teen girl on the cheek.
► A man talks about suspecting that a young man raped his adoptive sister and that she became pregnant. A police officer makes suggestive comments to a teenage girl. Teenage girls discuss, in the presence of teen boys, the "different kinds of orgasms," while one moans suggestively. Teen girls discuss that a teen boy is giving his girlfriend a sex aid for her birthday. A young man talks about wanting some video from a crime scene and that there is probably footage of a young woman naked on it.

VIOLENCE/GORE 8 - A teenage girl acts oddly and doesn't talk to her boyfriend while they are driving, she then vomits in the car, she punches him in the nose (he yells and we see blood on his face), she stabs him in the eye with a shard from a broken CD and she slams his head into the steering wheel repeatedly and until blood and matter shoot out and onto the dashboard.
► A young man cuts a teen girl's throat and leaves her slumped over a toilet (we hear the cut and squishing and see a lot of blood). A woman stabs a man in the back, the man throws the woman onto the ground, pulls the knife out of his back and jumps on top of the woman, stabbing her in the chest (we see blood on the knife, we hear a crunch as the man lands and see blood on the woman's chest) and is shot by police officers that have arrived on the scene (we see blood spurt from the bullet wounds); both the man and the woman lie dead on the ground and we see portions of the murders in flashbacks throughout the movie. A young man strangles a man from behind using a wire, and then shoves his head into something that pokes through his eye and out the back of his head (we see blood spray on the young man's face and brains push out of the back of the victim's head).
► A man shoots another man in the head (blood sprays on a teenage girl kneeling in front of the man) and he then shoots a teenage girl in the head. A woman is shot twice in the stomach (we see blood spurt). A young man is shot several times, we see blood pour from his wounds and he falls to the ground.
► We see a dead man in the front seat of a car with a lot of blood on his face and head, as well as streaks on the driver side door. We see a dead woman slumped near a toilet with her throat slit (we see the wound and blood spurts from it). A teen boy and a teen girl find a dead body in a car (we see a very bloody head and face). We see video of a body being taken away from a murder scene and the body sits up and lunges toward the camera before the screen goes fuzzy.
► A woman inside a house screams for someone to give return her baby; we see the woman pulling herself along the floor and calling to a man who punches her several times and kicks her (she has blood on her face and abdomen). A young man and a teen boy fight, a teen girl hits the young man in the face with a camera, he hits her hard in the face and then kicks her in the stomach, the young man then head-butts the teen boy and he falls to the ground unconscious (we see blood on his head and mouth). A young man locks a teenage girl in his van; we see her later with blood on her head, bound and gagged. A young man knocks a teen boy out using a cloth doused with something and he wakes up taped into a chair.
► A young man watches a video of a crime scene as a body is being wheeled away and when the body lunges toward the camera, the young man is thrown back out of his chair and lands hard on the floor where he thrashes and then falls unconscious. A teen girl is thrown onto the floor where she thrashes after looking into a camera lens. An infant looks into a camera lens and we see its eyes begin to change color. A young man twitches while looking into a TV screen and his nose bleeds. A man grabs a young man by his jacket and threatens him.
► We see a TV news report about the murders of several people. A young man cuts a stuffed bear open using a pocket knife and stuffs a camera inside.
► A teenage girl re-enacts a murder scene: she thinks she hears someone in the hallway outside her room, she turns around and someone stabs her in the chest, and she runs away and to the front door where she is stabbed in the stomach (theater blood is shown on her chest and she spots some out from her mouth). Several teenage boys and teenage girls re-enact a murder scene while filming it: a teen boy is shown covered with theater blood and slumped over in a car, a teen girl is shown with a bloody throat wound and another teen girl is shown lying motionless with blood on her chest. A teen boy puts his fingers to his temple in the shape of a gun and pretends to shoot himself.
► A man talks about another man being the devil and about the legend surrounding him. A man talks about evil being passed from father to son. A mother and her teenage son argue in a few scenes.
► A teenage girl vomits in a car (we hear her heave twice and see some slime on her hand). A young man coughs up blood (we see a gob of blood on his hand). A man talks about people believing that photographs steal a part of your soul. A young man changes as the movie progresses and we see his skin change color and begin to decay, his fingernails turn black and his eyes darken.
► A woman is shown in a hospital bed with a bruise on her chin. A man is shown in a wheelchair with oxygen tubes at his nose and his legs seem to be crumpled. A teenage girl tears at duct tape wrapped around a teen boy using her teeth (they both yell). 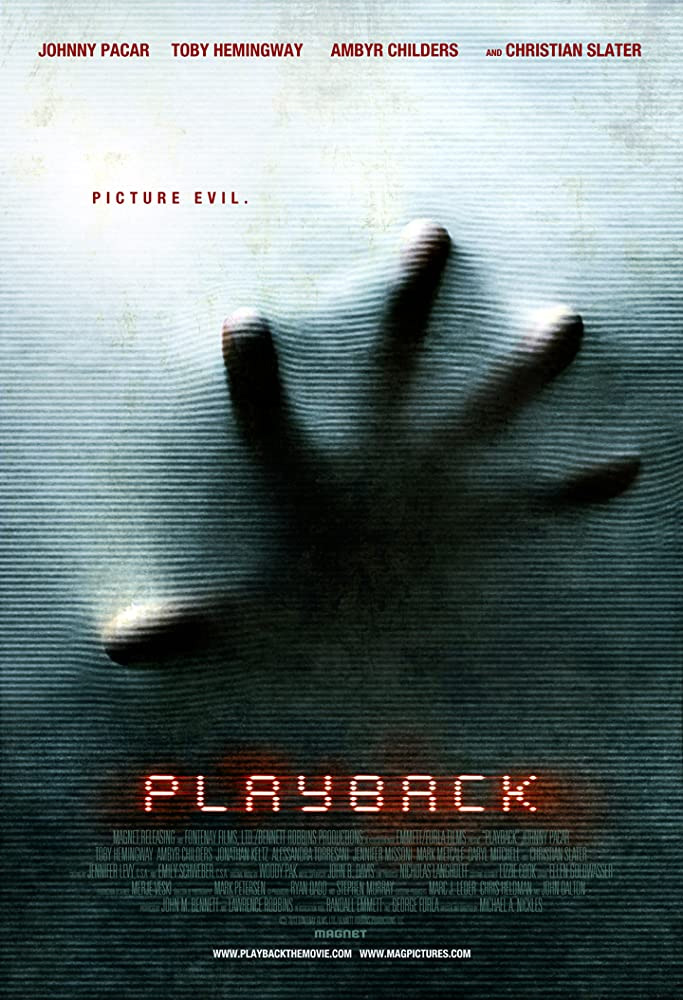