SEX/NUDITY 1 - A female plane tells a male plane that was in a coma (please see the Violence/Gore category for more details), "I like watching you sleep," then smiles and growls at him in a flirtatious manner and calls him pet names like Dusty Muffin and Sweet Pea and talks about their dates (actually when they are attending the same meetings); she places a wing tip around his shoulders and says, "Yeah, they're real."
► A female plane calls a male vehicle a "pickup truck" when he tries to be friendly at a party and calls her Sugar Ribs. Two long-married RVs revisit the site of their first kiss and each says, "I love you." Songs in the film include Runway Romance and Muskrat Love. A female plane says she liked working in Anchorage, because there are many men there.

VIOLENCE/GORE 3 - A huge, realistic looking wildfire breaks out in a national park and spreads, approaching a wooden lodge full of tourists; the screen fills with wide stands of burning pine trees in the middle of black and gray smoke and the flames reach the top of the screen before fire and rescue planes drop fire retardant that puts out only part of the fire; a plane stalls and falls through trees into a raging river and over a waterfall, despite help from the plane's commander, but lands in some dirt; the two planes are unharmed and take shelter from the fire in a mineshaft as wooden buildings burn around them (the paint on one of the planes blisters with audible pings and the other plane fears suffocation) and we later see the ground, trees and wooden buildings appear scorched and broken; the two planes fly away and the larger plane crashes and rescue planes are shown carrying him by cables to their fire station where we hear that he needs a new hydraulic system and then several days' rest.
► A crop duster redlines and its engine seizes, causing it to crash hard through trees as the screen becomes silent and covered with thick smoke to end the scene. A tall burning tree falls over into the roof of a long building, breaking the roof and spreading flames as RVs, trucks, cars and a train flee from a park lodge as a large fire approaches, but are blocked in when burning trees fall across the highway and the rail tracks; fire and rescue planes disobey orders and fly at night to save the evacuees where they fly through a thick cloud of smoke and ash, with heat waves radiating toward the audience; a loudspeaker announces that an elderly RV is stuck on a bridge over the burning forest and the bridge begins to crumble and burn as trees around and below it burn in tall flames and smoke; a crop duster and a helicopter throw out supporting cables and drop lake water that allows the RV to hurry off the bridge as it collapses toward the audience. A forest fire and rescue group puts out a tall fire in a stand of pines on a mountainside and a tall burning pine drops toward the audience; backhoes descend with parachutes and cables from a plane and cut logs with buzz saw arm extensions, then push them toward the camera to build a firebreak while planes drop fire retardant and extinguish the flames. A small forest fire: we see tall flames and heavy smoke as tall pines burn realistically and close to the camera when backhoes cut logs, pile them in a firebreak in close-ups, planes drop fire retardant and the fire extinguishes.
► A heavy-lift helicopter carries a wrecked plane by cables and deposits it at the door of a maintenance hangar; the plane is crumpled, scorched, missing one leg/pontoon and wing and powerless; after several days of rebuilding, the plane wakes up slowly and groans in pain.
► A crop duster tests its engine at night and accidentally clips an electric tower and an airport tower, causing a fire to break out and a loud fire alarm to ring; planes and forklifts pull over a water tower and spill water onto the burning airport terminal (it crashes loudly, sending a flood into the tall roaring smoke and flames and extinguishing them); bureaucrats close the airport for non-compliance with safety regulations.
► A male plane roughly tries to cut off a female plane from a fire evacuation route, but a large truck overseeing the evacuation stops him. An SUV flips levers on water lines to steal water from firefighters managing a huge forest fire.
► A crop duster joins a training class for firefighters at a rescue station in a national park and finds the training grueling, especially because its damaged gearbox holds it back as its commander, a helicopter, shouts at the plane continually; the boss asks the plane if the crops it dusted died a lot (no reply) and they argue often with the copter telling the crop duster that overconfidence can get you killed, that firefighting is life and death, and if the crop duster gives up on training, it won't be able to save lives.
► A crop duster experiences sparks in its engine gears and belches black smoke from its propeller and loses altitude, but recovers in time to land at an airport; there, the plane learns that its gearbox is damaged and irreparable and the plane argues with a forklift that tells him that he will crash and die if he redlines. An old fire truck wheels away to his station house and cries a bit about being old and useless. A crop duster offers to become the second firefighter required at the airport but bureaucrats decline.
► Bureaucrats and an SUV that manages a large park lodge belittle senior citizens as old and useless. An SUV shouts over a cell phone to "fire the old lady!"
► As a forklift/mechanic works it mumbles short muffled curse-like syllables in the manner of the cartoon Fred Flintstone ("razza mazza bliffle," etc.). A forklift snaps a picture of a new plane in the group and laughingly says it's for the Wall of Fame after the plane is sure to crash.
► A Wall of Fame in a maintenance hangar is filled with pictures of planes that crashed and died in the line of duty.
► An animated gasoline trucks says, "I've got gas," jokingly suggesting intestinal distress. An airplane flatulates smoke out of its tail, away from the camera. An old fire truck says his rear bumper was rusty until he used an anti-rust liniment, suggesting hemorrhoids, as he faces the camera and wiggles his rear bumper at a group of on looking planes.

SUBSTANCE USE - A gasoline truck says that he tastes the gasoline every day, wheeled vehicles and planes at several parties and a dancehall drink oil from spouts pushed into oilcans, a bar and back bar area feature stacks of unopened oilcans, and a forklift says about his boss that "he's out back sipping a Motorjito."

MESSAGE - A hero confronts challenges and sacrifices for others. 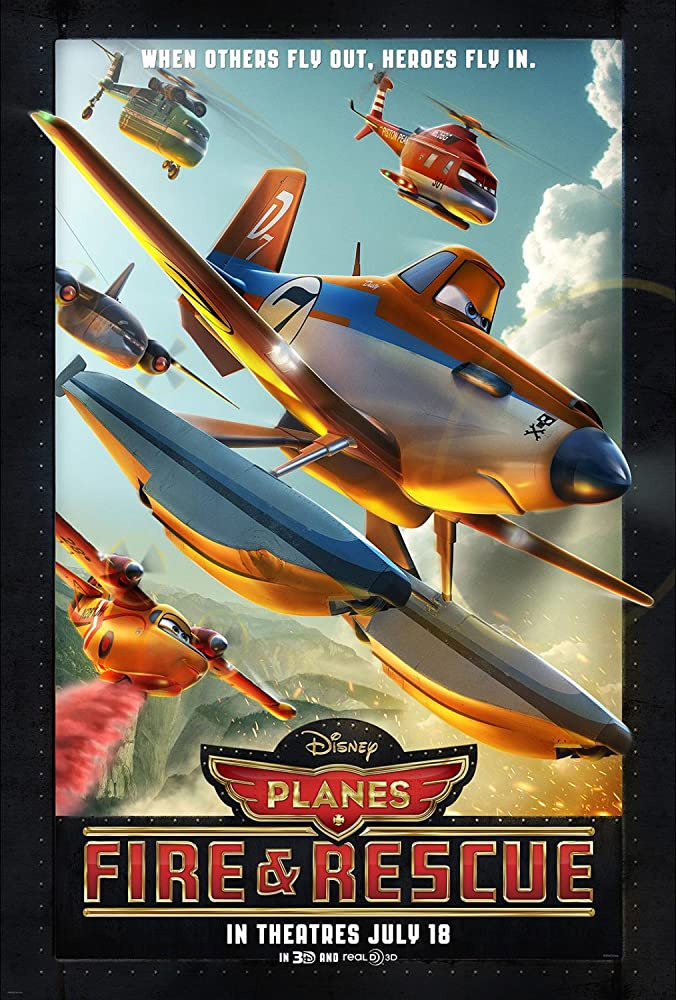