A famous perfumer in 18th century Paris (Dustin Hoffman) discovers a young man's innate ability to break down and decipher scents, and uses his talent to regain his stature among wealthy Parisians. When the perfumer dies, the young man ventures forth hoping to create his own perfect scent. However, obsessed with the elusive aroma of young women, he is driven to commit numerous murders. With Ben Whishaw, Alan Rickman, Rachel Hurd-Wood and Corinna Harfouch. Directed by Tom Tykwer. [2:25]

SEX/NUDITY 9 - A man blows a scent into the air, which wafts over a crowd of people causing them to become filled with lust, they begin kissing each other, removing their clothing and having sex and an orgy ensues (so many people are involved that it is hard to decipher specific acts; however there is full frontal male and female nudity, kissing, groping and thrusting and the participants include a priest).
► We see a woman having sex with a man: her bare breasts are visible and we see her thrusting and hear her moaning.
► A young man opens the dress of a young woman and sniffs her all over (we see her bare breasts and pubic region). Prostitutes line a street, a man asks one how much, they go to a room and she removes her clothing (we see her bare breasts, bare hips, legs, buttocks and stomach), but they do not have sex.
► A dead and fully nude woman floats in a large glass canister (her bare breasts, buttocks and pubic region are visible). We see several completely nude, dead women (their bare breasts, buttocks, pubic regions are visible). A male infant's genitals are visible.
► A camera shot focuses on a young woman's ample cleavage. Women wear extremely low-cut period dresses in several scenes, revealing cleavage and sometimes shoulders. A man removes his clothing and washes (we see some bare skin with no real detail). A man in shackles and tattered pants is shown bare-chested. A woman steps out of a bathtub and we see her bare ankle and foot.
► A man chases a young woman, another man grabs her and picks her up, and she screams while he tries to kiss her. A man and a woman lie on hay, he kisses her, she tells him to stop, she climbs into a loft, he follows, and she pushes the ladder down and he leaves.
► A man and a woman kiss. A woman kisses a man's cheek. A man and a woman flirt, and men and women dance together.
► People discuss the fact that tests were conducted on murder victims and that they were all found to be virgins.

VIOLENCE/GORE 8 - A serial murderer kills his victims usually by striking them on the head, and then he wraps them in cloth soaked in animal fat, shaves them completely and returns the bodies to a place where they will be discovered.
► A woman's throat is slit and she is robbed (we see blood gush from the wound and she falls to her knees). A man strikes a woman on the head killing her, and then wraps her in cloth soaked in animal fat.
► A dead and fully nude woman floats in a large glass canister. Two dead, fully nude women float in a body of water.
► A woman goes into labor at her fish market stall, she climbs under the table and delivers the baby, cuts the umbilical chord with a rusty knife, and then stands up behind the table and continues her business (she assumed the child was still-born, but it was not; the infant is covered with blood and slime and lies in a puddle of fish guts but it survives).
► A woman is hanged for trying to kill her infant; we see a rope placed around her neck, and we hear a thud and a crunch. A man is mobbed by many people -- they climb all over him until he disappears. A man is hung and we see him swinging by the neck. As a reaction to panic over a serial murderer people begin killing people whom they suspect may be the villain: a man is beaten by a crowd of people, several men shoot another man, etc.
► A young man follows a young woman through dark streets, he finds her seated at a table alone, he sniffs her neck and covers her mouth when he thinks they will be discovered, and he smothers her, killing her.
► A man is strung up from his feet and lowered into a pot of water, he is held under the water just to the point of drowning, and then he's pulled back up and questioned.
► Children in a shared room in an orphanage cover an infant's face with a blanket to keep it from crying (they are beaten by a woman with a stick when they are discovered).
► A man chases a young woman, another man grabs her and picks her up, she screams, he tries to kiss her, and the scene ends.
► A man stumbles, falls and strikes his head on a stone walk, and then rolls into a river (he is dead). A young man is beaten by a man with a stick. A man slaps his daughter across the face. A man hits a woman on the head, and the woman then hits the man on the head.
► Soldiers hold guns on man, they shoot, and one shot strikes close to him.
► A man is sentenced to a beating with a metal rod on his limbs, and then to hang until he is dead. A man dreams that his daughter is murdered. A building collapses and we hear that a man inside the building was killed.
► A man in shackles (we see a bloody slash on his back) is dragged out of a cell and through a hallway to be presented to an angry crowd (they scream and chant) for pronunciation of a criminal sentence. A man with a sword approaches another man and threatens to kill him, but then trembles and falls to his knees. An executioner climbs onto a platform and prepares to execute a man.
► There are several scenes that depict a particularly filthy and disgusting environment, with muddy marketplaces, maggots wriggling on rotted food, people being very dirty, etc. We see a pig being gutted while hanging in a market. A boy sniffs a dead rat (we see maggots wriggling on it). A dog digs up a dress and hair. We see a dead frog in a jar. A young man sniffs the air as he walks through dark and dirty streets.

SUBSTANCE USE - People are shown drinking wine at a party.

MESSAGE - Obsession can lead you to do unthinkable things. Odors can affect behavior. 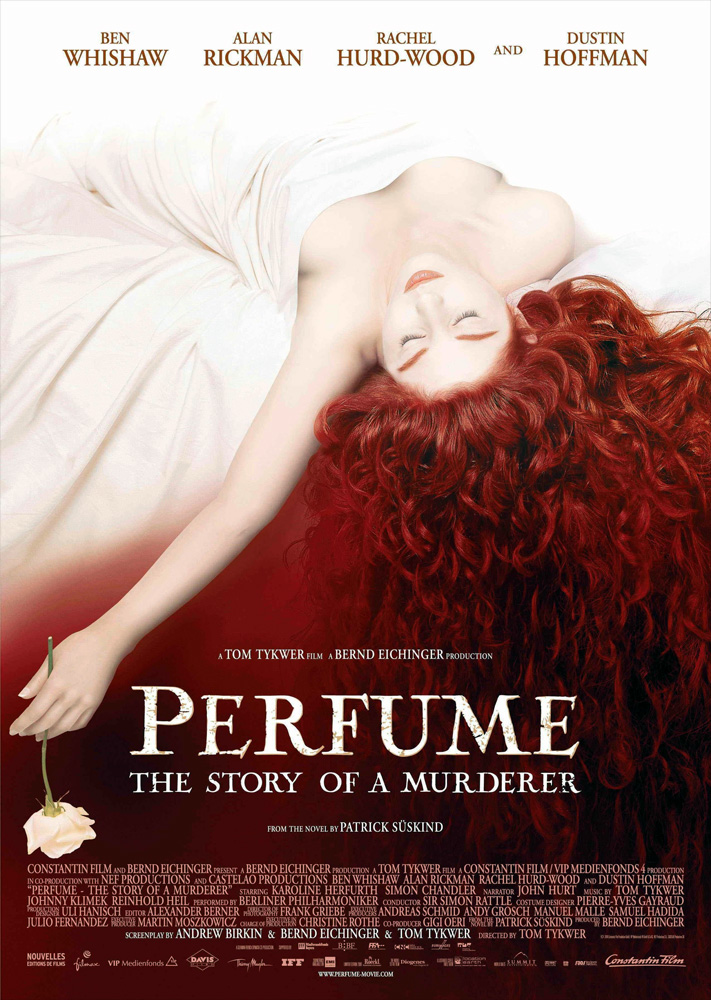