Based on the actual events of two bombs exploding during the Boston Marathon on April 15, 2013: A police officer stationed near the explosions (Mark Wahlberg), an FBI agent (Kevin Bacon), and the Boston Police Commissioner (John Goodman) ask survivors, first responders, and the public to help them catch the two terrorists who planted the bombs. Also with J.K. Simmons, Jimmy O. Yang, Vincent Curatola and Alex Wolff. Directed by Peter Berg. Several lines of dialogue are spoken in Chinese with English subtitles. [2:10]

SEX/NUDITY 2 - A woman wearing a sleeveless shirt lies in bed on top of her husband. A woman kisses her husband goodbye. A middle-aged couple embraces and a younger couple embraces.
► An investigator says a terrorist's computer was full of pornography (we do not see any of it).
► A few women wear tight crop tops that bare their abdomens. A man runs shirtless. A photo of male corpse on a gurney shows apparent nudity, but body details are covered in blood (we do see a partial buttock).

VIOLENCE/GORE 8 - We hear two loud explosions and we see buildings emitting large puffs of smoke and dust from the explosions; one building spews flames as men, women and children in the street and on sidewalks during a marathon race scream; in extreme close-up, we see the feet of men and women go out from under them, glass shatters onto the sidewalk, and bodies hit the sidewalk on top of shattered glass, with small chunks of concrete and large spots of blood (we see several serious injuries that include missing legs with bloody stumps, a bloody dismembered leg, a dismembered foot in a shoe, several shredded legs covered in blood and a burned and bleeding foot and ankle of a woman being placed into a wheelchair; blood covers the faces of some men and women and other men and women place tourniquets on three bleeding legs; hysterical people hold injured loved ones and call for help, as others limp and are carried away on foot and on gurneys.
► Two men approach a college police officer in a cruiser and they shoot him several times in the face in a close-up and a long shot; we see a few shots enter the forehead and cheek, causing blood flow as the officer shouts in pain (we see blood on his face and hands as he is loaded into and ambulance). Two men carjack a man at night, hold him hostage at gunpoint, steal his money and threaten to kill him twice. Police chase two men in a car and they exchange fire in a neighborhood street where many police shoot and the men blow up several cruisers with pipe bombs (several vehicles explode in flames and smoke, some of them flipping, crashing loudly, and knocking officers down); an officer is injured and bloody and a fellow officer shouts for someone to call for an ambulance. A police sergeant chases one man, shoots him in the chest multiple times as the man fires back unsuccessfully, and the officer tackles him; the man's partner runs the injured man over with an SUV and he escapes (we see the wounded man on a gurney, covered in blood as he dies and we see large bullet holes in his chest and stomach). Many police officers surround a boat where a man is hiding under a tarp and they shoot assault rifles into it; the hiding man emerges with blood on his face, hands and one leg and an officer slams him to the ground with a loud thud. A police officer enters a café and is startled when a gunshot comes in the open door from outside with a loud pop, but hits nothing.
► A video on a laptop shows how to build bombs by placing nails, BBs, and pieces of metal into pressure cookers and we see two men load pressure cooker bombs into two backpacks.
► We hear that two women in their 20s and an eight-year-old boy died in a bombing and we see a white sheet covering a small body on a sidewalk as a police officer guards it; we see two female bodies slumped together on a sidewalk, and some blood on their arms and we cannot tell if they are alive or dead. We hear that over 250 people were injured and we see blood spatter on the face and in the hair of a toddler.
► In a hospital we see many bloody bandages and some bloody shoes on a floor as we hear two doctors order leg amputations and see and hear a surgeon activate a bone saw (we see the injured legs with some blood flowing from wounds and the scene ends). A man and a woman each are shown with leg stumps bandaged in bandages; they are unconscious, with breathing tubes down their throats and relatives cry nearby. Several men and women lie on gurneys and they have some blood on their faces and hands. An empty street is littered with bloody clothing and shoes and men in a warehouse arrange many bags of bloody clothing on a floor for examination. We see two women and one man running on blade-runner prosthetics, and two men in wheelchairs with one leg stump each in white stocking-type bandages at the beginning and the end of the film; a man without legs operates a racing wheelchair-bicycle with his hands, another man has a metal prosthetic leg with a shoe on the end and a woman has two prosthetic legs with shoes.
► An interrogator refuses to read a Muslim woman her rights or allow her to have an attorney; she questions the woman about bombs and when the woman tries to leave a man slams her into a straight back chair; the interrogator pulls out a photo of the woman's dead husband covered in blood and bullet holes and the woman talks about the duties of a Muslim wife. A detective kicks in a hotel room door and finds a man who runs into another room; the detective questions him about a crime and we see blood on the suspect's forehead and a long red cut down his cheek.
► The Massachusetts governor closes the City of Boston and alerts residents not to leave their homes and armed soldiers and police officers go door to door, searching houses. A police officer works for nearly 100 hours without sleep on a sprained knee in a brace, limping as he runs and climbs obstacles in a search for two men (we see his knee once, red and striated with scratches). A police officer shouts when his neighbors ask about his work and he breaks a drinking glass on the floor. A police officer grieves over the dead and injured after a bombing. Two law enforcement officials argue loudly about press coverage of fleeing terrorists. A scene shows marathon runners and officials observing a minute of silence for the Newtown shooting of 26 children and teachers.
► A man plays a violent video game, shooting cars and catching them on fire.

SUBSTANCE USE - A man smokes a bong and we see a little smoke, a man smokes a marijuana cigarette, we hear that a man was a marijuana dealer, and a nurse offers a man Vicodin when he asks for aspirin (he insists on aspirin and we see him swallow tablets). A policeman drinks from a bottle of whiskey in an empty café, a few men and women drink clear liquor shots and bottles of beer in a bar, men and women drink from beer bottles at several tables in a bar and a woman tells a man, "Let's get drunk" as the scene ends, a man drinks a bottle of beer at home, two men drink bottles of beer and three empty bottles are seen on a table in an apartment, a woman pours two jam jars of wine and she and a man drink from them, and several men and women drink from beer bottles on a sidewalk. A man smokes a cigar in one car and another man smokes a cigar in another car, a man lights and smokes a cigarette in a car, and a man hold a cigarette at his front door (he does not light it).

MESSAGE - The citizens of Boston survived a terrorist attack by helping each other and staying strong. 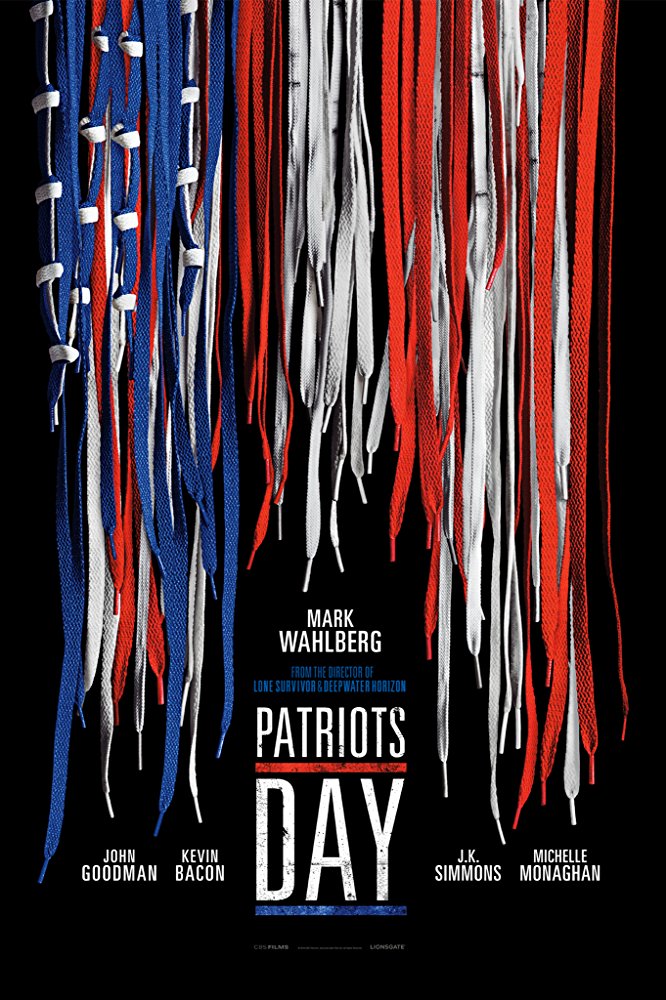