Animated 3-D feature about a domesticated grizzly bear that's happily lived all its life in a garage. When it saves a one-horned mule deer from a hunter, they become reluctant friends, and end up together in the woods during hunting season. It's up to them to fend for themselves, as well as save all the other forest animals from determined hunters. With the voices of Martin Lawrence, Ashton Kutcher, Debra Messing, Billy Connolly, Paul Westerberg, Gary Sinise, Jon Favreau and Patrick Warburton. Directed by Jill Culton, Roger Allers & Anthony F. Stacchi. [1:39]

SEX/NUDITY 1 - A skunk says of a duck, "I know he's a duck but he treats me like a lady." A buck makes a sound of interest as a doe walks by.
► One character says, "he'll shiv ya" and a woman says "No. We had him fixed."
► Women's bras are used as catapults.

VIOLENCE/GORE 4 - A man and a bear fight, the bear roars loudly, the man slashes at the bear with a knife, the bear hits the man with a golf club twice, leans over and ties the man's hands and feet together with his bent shotgun (several animals attack the man while he is tied up and pounce on him).
► We see a bear in silhouette, behind a stage curtain, and it looks as if it is attacking a buck: the bear pulls a jacket off the buck (in shadow it looks like it's ripping its skin), it pulls a rope off (it looks like its intestines), a can of paint is spilled across the curtain (it looks like blood is splashed all over), and the bear and buck crash through the curtain and onto the floor and the audience screams in fear and runs away.
► A man throws a knife at a bear's paw (it does not hit the bear). A man holds a gun and comes close to shooting a bear before he is stopped. A man aims his gun at a buck but he is stopped before he shoots.
► A dam is broken, rushing water fills a gully, and many animals are swept into the water; a truck washes into the water too, and the driver tries to shoot at the animals, and at one point he's struck by a log.
► A bear wakes up in a cabin with many mounted animal heads on the walls and the bear is very frightened. A man has a buck tied to the hood of his car (we see the buck with one antler missing and its tongue hanging out of its mouth), and initially it is not clear if it is still alive, but it begins twitching and wakes up and screams when he realizes that it is missing an antler.
► A man is struck by a camper, and we see him tied to the roof later and hear him scream (he's thought to be Sasquatch). A buck is struck by truck that drives off the road and toward it. A buck is nearly struck by a truck that chases it through a town.
► A bear falls from a high cliff, it bounces off many tree limbs as it falls, and then lands on a porcupine (we see a buck pulling the porcupine off the bear's back, we hear a crunch and bear yells loudly). A bear holds a buck over a high cliff, the bear drops the buck and catches it, but the buck screams as if it is still falling. A buck is catapulted a couple of times and one time it crashes into a man holding a gun and it falls on the ground unconscious (a bear thinks it's dead). A bear throws a buck high in the air, the buck comes crashing down hard and its antler becomes stuck in the ground.
► A man grabs a dog, the dog bites the man on the nose, and he lets the dog go. We see many ducks being shot out of the sky and they are in flames as they fall.
► A group of hunters is attacked by various animals in sundry ways: Several ducks carry skunks that spray them, bucks stampede toward them, fish jump out of the water and slap hunters across the face, animals shoot flaming marshmallow at the hunters and many of their cars explode, and the hunters are sprayed with cheez whiz.
► A bear is pummeled by many rabbits, and it throws the rabbits back and says, "eat rabbit." A bear is sprayed by two skunks (the bear runs away yelling and a squirrel falls out of a tree and twitches on the ground). A buck throws another buck high into the air. Many squirrels with pinecones pummel a bear. A buck yells at, shoves, and threatens another buck. A squirrel threatens a bear in a few scenes. A bear slams a buck against a wall and yells at it.
► A buck and a bear ransack a convenience store: they open boxes of cereal, throw pizza, squirt slushy in their mouths, spray each other in the face with cheez whiz and appear inebriated from eating a lot of sugar and junk food -- one of them gets its tongue caught in the hot dog spinner and it stretches.
► A bear is shot by a tranquilizer gun, and a buck is shot 6 times by the same gun (we see 6 darts on its buttocks, and both animals collapse).
► A man's teeth fly out and end up in a duck's bill. A bear smacks a buck's badly sunburned bottom. A buck holds a candy bar, a bear bites the candy bar and the buck's hoof ends up in the bear's mouth (the bear spits the hoof out). A buck throws rabbits at a garage window to get a bear's attention (we hear the rabbits slam against the window and then slide down again); the buck then climbs through the window and falls on the floor (rabbits are repeatedly used as pummeling fodder throughout the movie).
► A large grizzly bear stands up behind a woman and roars, the woman spins around and roars back at the bear, but louder, and it recoils. A bear growls while riding a unicycle around a stage in front of a human audience (the audience members seem afraid).
► Two skunks argue in a few scenes. A truck drives off a road.
► A bear vomits on a window (we see green goo with cereal loops in it). A buck spits in its hoof (we see goo drip) and holds it out for a bear to shake. A buck defecates (we see several pellets). A bear sits behind a bush trying to defecate and many rabbits come to watch. A bear flatulates, and a bear uses a toilet triumphantly (with the door closed).

SUBSTANCE USE - A buck and a bear appear inebriated from eating a lot of sugar and junk food.

MESSAGE - Sometimes letting someone you care about go is the best thing for both of you.

(Note: We are told that no rabbits were injured during the making of this movie; they are repeatedly used as pummeling fodder.) 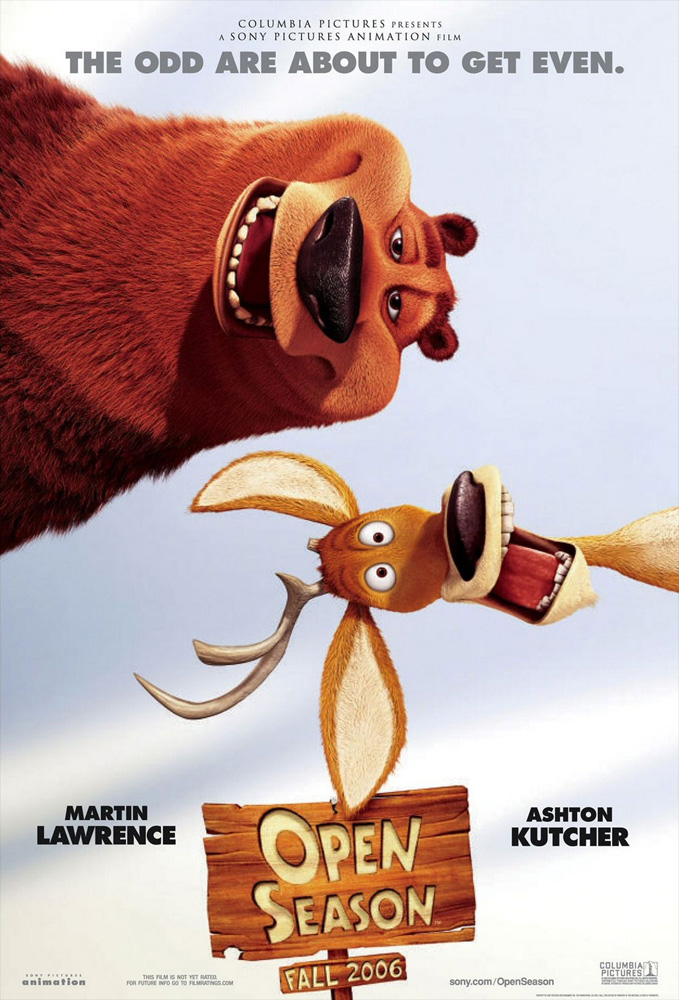