The infamous Cruella De Vil is paroled from prison, after she's been seemingly reformed. But her spots haven't changed and she is once again after Dalmatian puppies in order to turn them into a coat. With Glenn Close, Ioan Gruffudd, Alice Evans, Tim McInnerny, Gérard Depardieu and Tony Robinson. [1:40]

SEX/NUDITY 1 - We see a woman modeling a fur bikini and a woman showing exaggerated cleavage. Some flirting, a hug, a kiss on the cheek and one on the lips.

VIOLENCE/GORE 4 - Several dogs snarl, bark, threaten and bite a few humans (usually in self defense, and on the backside; there's no gore). A parrot also bites a man's pant leg and a puppy bites a man's dangling leg (the man screams). A puppy goes through a conveyor belt and is picked up and tossed under several huge blades that come down very fast; it disappears for several seconds, leaving the impression that it perished, but it emerges unscathed. A man with an injured and bandaged hand gets it slammed by a door, caught in a door and run over by a vehicle (in a close-up). A man falls and lands face first in a toilet and a man falls into a crowded closet and shelves fall on him; he seems to be unconscious for several moments. A man and woman discuss making furs and whether they enjoy skinning or strangling the animals more -- we also see a man unwrapping very large and sharp skinning knives. A woman shoves a man's face against a window and a man throws a man through a window and slams him into a wall. A fight ensues, with two men smacking each other. One man hollers and throws things around and one man is shown somewhat bruised, with a bloody wound on his forehead, and with torn and disheveled clothes. A man falls from a window with puppies in a sack. People repeatedly steal dogs and several dogs are put in sacks and cages; we hear them whimpering. A man grabs a puppy by the scruff of the neck and it yelps. A dog chases a duck, and we see and hear a cat burp; the cat then appears with a canary feather dangling from its mouth. In an extended scene a puppy falls out of a window and dangles from a gutter. Other dogs and a woman nearly fall off trying to save it (they eventually do). A woman's personality is transformed from being "good" to being "evil" and we see her jerking while her hair is popping up and her nails grow long and pointy; she stumbles through a crowded street seeing everything, from people to buildings to vehicles, covered in Dalmatian spots. A bucket of blood or red paint (it's not clear) is thrown on a man. He walks around for a while with red streaks on his face. There's talk of finding and killing a puppy and dogs run into traffic and are nearly run over. A dog attacks a puppet, and a puppy floats away tangled in balloons (a man climbs a ladder and runs along rooftops in order to save it). Also, a puppy dangles from the back of a train and falls off. It's swept up by a parrot and dropped into the train. A woman is locked in a basement and a man and woman are locked in a cellar, and a woman is momentarily stunned when she runs and falls on the floor. A scene of reckless driving with several cars crashing into other cars. A puppy and a woman walk along a narrow and high conveyor belt, the woman dangles from a cable and falls into a shovel-like tote. Eggs are dumped on her head, she is plunged into milk and flour is poured all over her. She's "mixed" in a huge blender, spinning around with her feet in the air, and the resulting batter is splattered on a flat belt. She's then rolled by a huge rolling pin, dumped into a cake mold and transported into a huge oven. She comes out encased in a huge cake, and dogs squirt her with icing and pour sprinkles on her. She runs into a window and smears icing on the pane as she falls to the floor. There are several gross and drooly dog gags: A man plays tug of war with a dog and is splattered with thick drool, a dog drools into a woman's eye, and a dog is shown with thick drool hanging from his jowls. A dog coughs up a bone; dogs fight over food and make a big mess at a huge dinner table covered with food -- some of the food is made out to look like a dog face. A woman eats a dog biscuit by accident. We see the inside of a fur factory with people sewing skins. Cruella De Vil is a menacing character living in a gothic, dark mansion; when she appears she's frequently accompanied by menacing music.

LANGUAGE 2 - A common British slang exclamation (a corruption of the phrase "blind me"), several anatomical references, some mild scatological terms used as a play on words and some name calling and insults.

MESSAGE - Dogs are the smarter species. It is possible for people to change, but only in the short run. 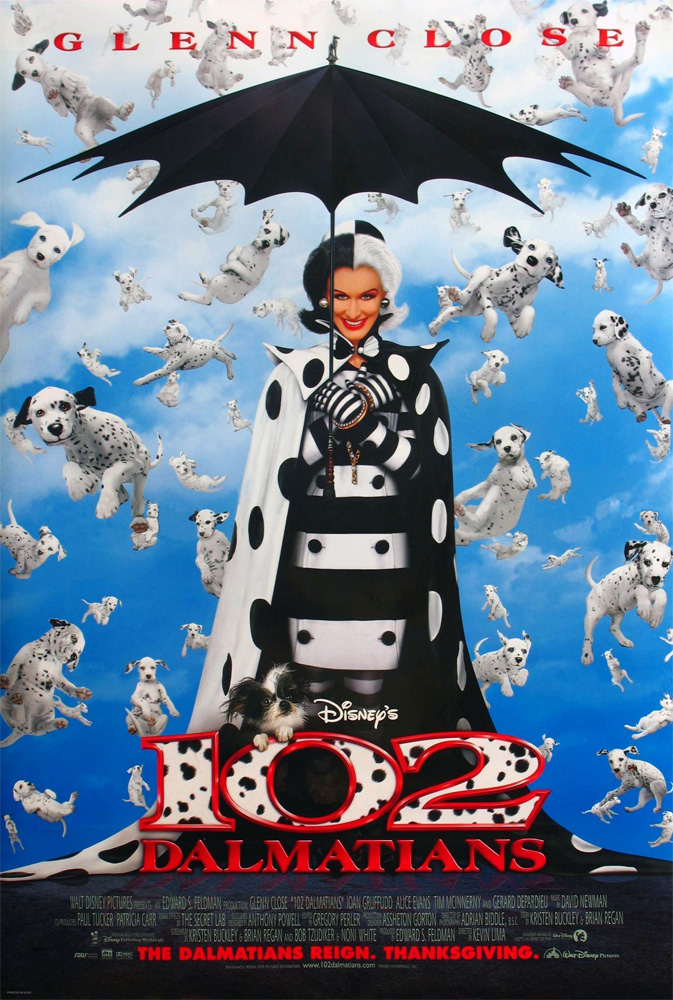