VIOLENCE/GORE 3 - A young man rides a motorcycle and crashes it; he is thrown into a tree and we see him unconscious on a stretcher with a bloody head and face and later in the hospital with casts on his arm and leg.
► Two young men argue and fight, one slams the other on the floor several times and we see his nose bleeding. A man and his adult son argue, the man throws something at the son and then grabs him while yelling. An audience member throws a can at a band member and it hits him in the head; he yells but does not appear harmed.
► Several young men pass a marijuana cigarette in a bathroom at a party and one inhales the joint itself (he gags and gasps but we see him OK later although we hear a reference to his not be able to sing while recovering). A young man juggles lit fireworks and one hits him in the head (he yells but we see no damage).
► We see a man beating what we think is his dog with a baseball bat (no blood is shown, nor the aftermath); it turns out to be a large rat. A woman is shown (looking strung out) on a gurney and being wheeled into an elevator at a hospital (presumably a rehab facility of some kind).
► We see a bomb explode and a mushroom cloud forms on a TV screen as a voice-over talks about how to survive by ducking under furniture, etc. A young man hitchhikes and when a man and a young woman stop for him, he does not get in. Three young men stand inside a drain on the side of a street and when a car's headlights illuminate their faces, it swerves nearly running off the road.
► A young woman backs a car out of a garage and hits the side mirror on the door frame tearing off the mirror and gouging the frame. A young man drives his car into marking stakes on a lawn and another young man charges out of his house yelling at him.
► We hear about the John K. Kennedy assassination and see a portion of the funeral procession on TV. We see a portrait of a man with a hard facial expression and painted in bright colors.
► A family argues at the dinner table in several scenes. A man gives his college-aged son a hard time about the length of his hair and the clothes that he wears in several scenes and threatens physical violence ("You and me are gonna tangle"). Several young men argue about their band and who should be lead vocalist. Several people argue at a family gathering over dinner. We hear a woman screaming while having a nightmare. A reference is made to a housing project. A reference is made to rocks being thrown at Martin Luther King. A husband tells his wife that he has cancer and that he might have a year or two to live. A man talks about another man who "lost a leg in Iwo Jima" and another man who died in the war. A woman talks about her father wanting to have her arrested. A woman makes frequent references to killing herself when there are arguments among family members ("Why don't I slit my own wrists," etc.). A woman describes a nightmare she had and says, "I saw a [derogatory term for African-American deleted] boy coming up the lawn to get me." A man talks to his adult son about leaving his wife (the son's mother) for another woman (he does not leave her). A wife tells her husband, "Our grandchildren are going to have mental illness in their genes." When a young man and a young woman leave home together to go to California we hear a parent say, "You know this is a sin." A man talks about having psoriasis. A young woman tells a young man that "I've seen Grace (her younger sister) make poop if that holds any interest."
► A man scratches a spot on his arm in several scenes and we learn that he has cancer.

MESSAGE - The music business can be hard on relationships. 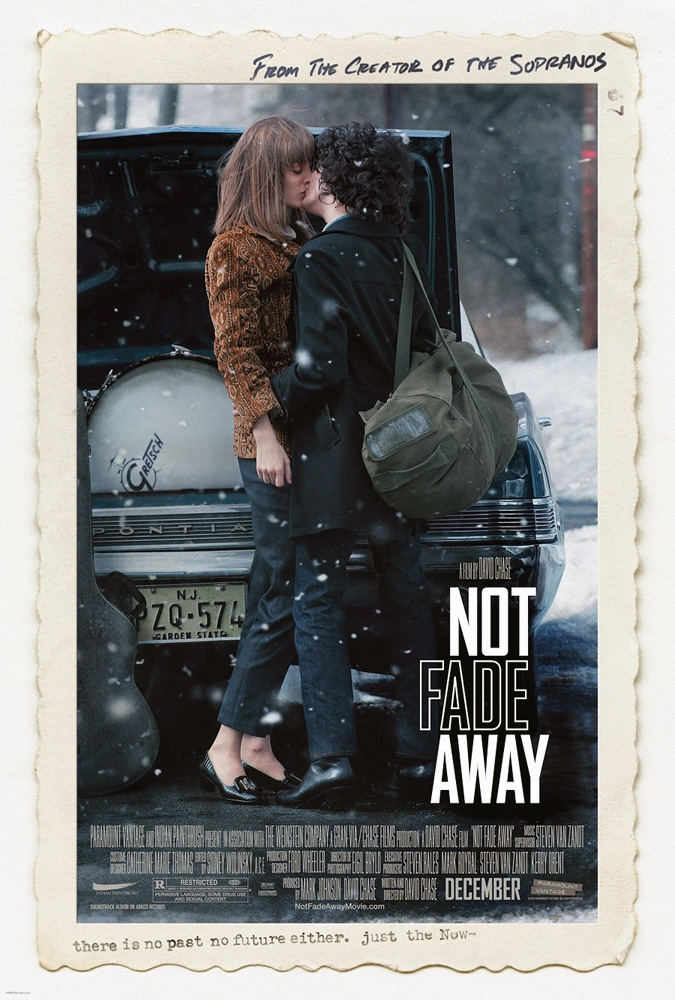