Since the first "Night at the Museum," the disappointed museum security guard (Ben Stiller) has made a success of himself as an inventor. When he visits the Museum of Natural History and discovers their plans to do away with the exhibits that he had grown so fond of, he is determined to get them back. Also with Amy Adams, Hank Azaria, Owen Wilson, Steve Coogan, Dick Van Dyke, Ricky Gervais, Christopher Guest, Robert Ben Garant, Thomas Lennon and Robin Williams. Directed by Shawn Levy. [1:45]

SEX/NUDITY 2 - A man and a woman share an extended kiss and another man later kisses the same woman. A woman kisses a man, then slaps him in the face, then kisses him and slaps him again. A man and a woman hug and kiss. A man kisses a woman's hands.
► Three cupids float around a man and a woman singing love songs in several scenes.
► A miniature man is hiding in a man's chest pocket, the man kisses a woman and the miniature man says that he "Just got to second base." A male statue makes suggestive remarks about a female statue. A woman tells a man, "You haven't been able to take your cheaters off my chassis since we met." A woman questions a man about whether he likes her. A man asks another man if he is romantically involved with a woman or if they are just friends.
► We see a female sculpture and her draped gown reveals bare back and shoulders. We see a nude male sculpture (bare chest, abdomen and legs are visible). Three cupids are shown with bare-chests and abdomens, bare legs, backs and buttocks (there are no discernible genital area). A giant squid hugs a man and the suckers on its tentacle kiss the man, leaving behind slime.

VIOLENCE/GORE 3 - A man is thrown through a stone passageway and we see him disintegrate and blow away.
► A man grabs a miniature man, places him in an hourglass, flips it over and sand begins to pour on the miniature man's head (the other man talks about the small man having only an hour to live). A squirrel stands over a miniature man, picks him up in its paws, tries to bite him as if he's a nut, and then drags him away by the feet (we hear the man yelling, but we see him again later uninjured).
► A man with a pitchfork fights another man with a sword. A man with a sword fights another man with a flashlight. Five spears are thrown at a woman and they stick into a wooden crate behind her (she is not harmed).
► A man slams into a metal beam while standing on a motorcycle, he falls off and lands on the ground (we see him later with no visible injuries).
► Several men with swords and spears come into a room and surround several people. Several men with spears surround another man. Several men with guns and bayonets threaten another man.
► A giant squid attacks a man (he gets away unharmed), a saber-tooth tiger skeleton lunges at the man (he gets away unharmed) and a pterodactyl swoops overhead. A man plays tug-of-war with a T-Rex skeleton, it wags it tail as if it's a dog, and the man is thrown but is uninjured. A monkey closes a box on a man's hands twice (the man groans).
► A security guard gives a man a hard time about nearly touching an antiquity, the guard pushes the man using his flashlight, the man grabs the flashlight and the man's arm, twists his arm around the back of his neck and takes the flashlight away. A woman kisses a man, then slaps him in the face, then kisses him and slaps him again.
► Two men on a motorcycle speed toward several men with spears, who jump out of the way before being struck. A man and a woman fly in a plane, people on the ground dive out of the way as they fly close overhead, the plane flies into a building and crashes into a glass display case (no one is harmed).
► The electricity goes out and a man stumbles into furniture trying to find a flashlight (it's a commercial). A stone entrance opens with loud rumbling. Rockets in a museum prepare for launch, and flames blow out of a rocket and smoke billows before the launch is cancelled.
► Giant squid tentacles flop out of a wooden crate (they are not alive). We see a large T-Rex skeleton in a museum setting and it becomes animated in a few scenes. A giant squid hugs a man and the suckers on its tentacle kiss the man leaving behind slime.
► We hear a commotion over a telephone and a man yelling at someone. A man yells at another man. A man makes reference to "tonight being their last" referring to a number of people and animals. People make remarks about a man's stature.

MESSAGE - The key to happiness is to do what you love with people you love. 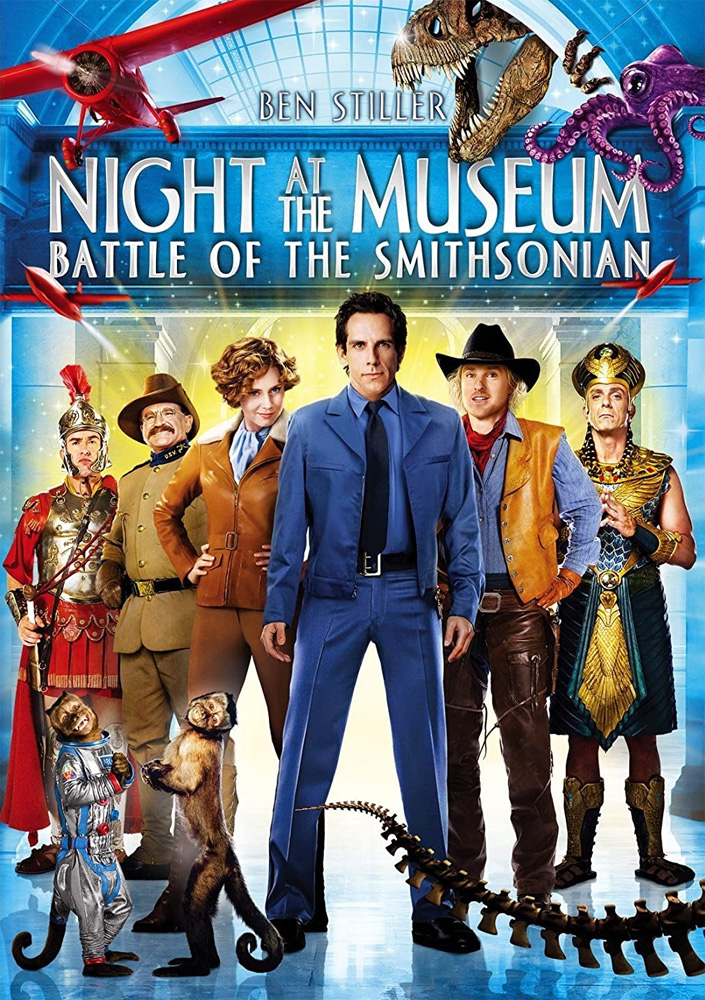