SEX/NUDITY 2 - In a flashback, newlyweds kiss before he carries her into their house. A wife runs to meet her husband returning from war and they kiss. A woman kisses an elderly man on the cheek to say thank-you and his eyes widen in surprise.
► A woman wears a low-cut blouse under a jacket and reveals a little cleavage in one scene. A woman blows away on a high wind and her skirt lifts slightly to reveal an almost knee-length girdle. A woman rides a sliding board as it pulls her dress up to her hips, briefly revealing bare thighs and legs.

VIOLENCE/GORE 4 - Three elementary school-aged siblings argue and fight: they choke one another, wrestle, pull hair, hit with a cricket bat and jump on furniture while their mother shouts at the kids several times in frustration. Two groups of children fight with hair pulling, hitting and knocking down, wrecking a kitchen and parlor along with their contents, and some of the items are seen burning in an open fireplace (the children are dirty, but show no injuries). Five children beat themselves up while under a magic spell: they hit themselves, pull their own hair, and knock themselves down, but no one is hurt or bleeds.
► After two children arrive at a farm for a visit, their clothes are kicked through a muddy and manure-filled yard by other children, a fight ensues and a man falls into a muddy pond.
► A man with gambling debts runs several times from two female debt collectors (one of whom is very menacing in expression and has a deep voice): he tells a woman that they will kill him and she laughs, twice they tell him they will remove his kidneys for non-payment of the debt, and one time they state that they will stuff him for display (they show him a stuffed owl and a small stuffed effigy of himself); he screams when they approach him with an IV bottle and long hose, he sits on a gas burner on the stove behind him, and shouts after a high wind blows the women away.
► A young girl stands on the ladder and cuts bomb wires as other children read diffusing directions to her: the bomb vibrates as lights flash, an alarm sounds and children and nearby adults shout. An elderly man climbs a ladder to disarm a bomb, but faints and falls backward to the ground; cushioned by thick barley, he's unhurt.
► A man fakes a telegram to a woman and her children stating that her husband has been killed in action in WWII; the woman and children cry and later we hear that the man is not dead, only missing.
► Several children say they will kill or mash other children. A father and his son argue, and the angry boy shouts at is father. A British guard tells two children to leave the war office entrance or he the will thump them.
► An elderly woman sits on a large cow pie at a picnic; we see the dung before she sits and we hear a squish. Three children muck out animal stalls and we see them heap manure onto a tall steaming pile, and then carry buckets of manure outside and dump it. A farmhouse yard is full of mud and animal manure. In several scenes, children and adults mention a terrible stench coming from somewhere. Farm and circus animals enter a home and walk upstairs while a woman downstairs sniffs and remarks on the odor. An elderly woman makes a mess in her shop, with a mountain of flour and dozens of drawers filled with maple syrup dripping to make goo.
► A black bird pecks at a wire and putty in an unexploded bomb and the bird swells up like a dirigible until a woman lifts the bird into the air, where he burps as loudly as a bomb explosion and the resulting wind forms a tornado. A plane accidentally drops a bomb in a barley field but it does not explode. We see troops on horseback, holding swords in salute.
► Five children chase runaway piglets, falling many times and shouting; two of the children sit in a tree and drop a net over the animals herded past by another child (we see the net drop, the scene ends and later we see the animals unharmed).
► A man and a woman argue several times about selling a farm: In one scene, a young girl screams for minutes at an imaginary mouse to distract them from signing a deed, we see adults panic and knock things off a sideboard, pens appear and disappear, and a baby elephant steals pens and runs out a door. Objects in a shop rattle, vibrate, hop about and begin chanting a name, startling a clerk, and a windstorm darkens the sky and blows objects around as the clerk looks worried and hears a disembodied voice chant, "The person you need is Nanny McPhee." An elderly man tells young children on a picnic that many bombs drop during war and he believes a pilot will accidentally drop one near their farm.
► Throughout the film, a homely woman is covered with warts and moles, and she has a bulbous nose, a unibrow, and a large bucktooth. A woman is very stern and frequently bangs her walking stick on the floor at people, creating shockwaves and a bright light traveling at ground level. A black bird rides on a woman's shoulder and continually belches loudly.

SUBSTANCE USE - A family discusses ginger beer for a picnic and we see that it is a soft drink.

MESSAGE - Children and adults treated with a little magic can become quite civil. 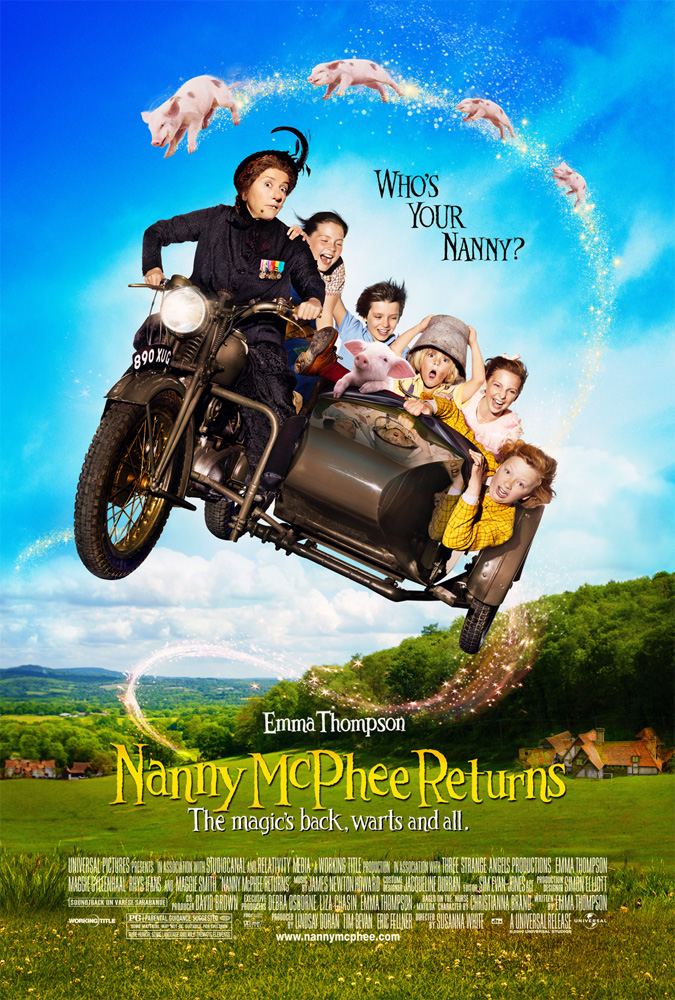