After the death of his wife a man (Sam Trammell) moves from Chicago with his teenage daughter (Sophia Lillis). The teen thinks her new hometown is dull, but finds excitement when she is asked to help solve a case of ghostly activity at the Twin Elms mansion. Recruiting her best friends (Zoe Renee and Mackenzie Graham) and the local “mean girl” (Laura Wiggins), the teenager undertakes some adventurous work. Based on the series of novels by Mildred Wirt Benson. Also with Andrea Anders and Linda Lavin. Directed by Katt Shea. [Running Time: 1:39]

– Teen girls wear tank tops and V-neck tops that reveal cleavage. Several girls wear miniskirts. Over a dozen teen girls wear short-shorts. A teen boy is shirtless in three scenes (we see his bare chest and abdomen). A teen boy in a locker room scene wears a towel around his waist and hips above the frame (we see his bare chests and abdomen). We see the back of a teen boy trying to do chin ups and his shirt rises to reveal his buttock cleavage. A teen boy stares at a girl’s buttocks as she is leaning over a weight bench (moderate cleavage is exposed in a scoop neckline); then, he walks by her and snaps his fingers close to her buttocks.
► An elderly woman says that she has gentlemen friends visit her house and that she was once a burlesque dancer; she shimmies for a few seconds in a long dress and a teen girl shimmies while seated in a straight back chair.
► Two men hug in friendship and a teen girl tells them, “Eeew! Get a room.” A teen boy in photos has his arm around different girls. An elderly woman says that a woman friend, “Loves any man in a Speedo.”

- We see video footage of a man kidnapping an unconscious man and putting him into a pickup truck; a teen girl watches the film and cries. A man ties another man to a straight back chair and points a gun at him in a cobweb covered basement, he takes the captive upstairs, where we see an elderly woman tied to a straight back chair, and the gunman puts the first captive into another chair and we hear a handgun trigger cocked as the gunman and another man argue about killing the tied up man and woman and the first man taps the second man sharply in the face, twists his arm and we hear a loud yelp; after a chandelier loudly pops sparks, the gunman is struck by opening cupboard doors and drawers in the kitchen and he is knocked down (no one seems injured), a teen girl hits the gunman in the head with a large kettle lid knocking him unconscious, another teen girl skateboards past one of the men and hooks his neck with a yard flamingo knocking him down, he picks up a nutcracker and hallucinates that it is trying to eat him and screams in terror at the flamingo, and then rolls around in pink-painted grass while screaming and scratching away invisible bugs and shouting, "I'm gonna die!" (when he is arrested later, we see the man with his face and clothing smeared in pink paint).
► Two teen girls and an elderly woman are frightened by lights going out, a chandelier popping large sparks, and electric candles floating in the air; they see a man in shadows as he runs past and into a kitchen and hear heavy footsteps off-screen and one teen girl is thrown and knocked down by a series of opening drawers and cupboard doors (we see no injury); when she gets up, she sees a man wearing an evil-pig mask moving toward her, she slaps his mask, and he lifts her by the throat, choking her; he then pulls up the mask and sprays a black cloud at her, the scene changes to morning and we see two teen girls holding ice packs to their heads.
► We see the feet of two men scrambling under an open truck door and see two arms around one man's neck; a young woman later finds an unconscious man and picks up a towel that is covered with an unidentified liquid (please see the Substance Use category for more details), and the victim is later shown conscious and holding a cold pack to the back of his head. Two teen girls struggle and shout angrily, wrestling with their arms while standing, but stop after a few seconds and one girl leaves. A teen girl on a skateboard is run off the street by a car that chases her into an alley, the car has a skull logo on its rear window and the driver gets out and grabs the girl's arm, growls, and threatens her if her father does not drop a lawsuit.
► A teen girl puts blue dye into showers in a boys' locker room and a teen boy turns Smurf blue later that day in the gym (many girls laugh at him); the girl with the dye is arrested for property damage and handcuffed to a chair, then given daily hours of community service. A teen girl breaks into a high school, a house, and a garage until the sheriff finds her at the garage and handcuffs her to a chair in his office again, but lets her go. A young woman with a passenger drives a sports car without a license, swerving, grinding gears and popping the clutch (no one else is on the road).
► An elderly woman throws apples at what looks like a black cloud in a kitchen. Loud metal music plays by itself three times and a deep wailing comes from off-screen. Two teen girls find a secret room furnished with cobweb covered furniture and a stairway leads out through an abandoned well and they also find a canister of black gas (please see the Substance Use category for more details).
► A man shouts, "I'm gonna kill this guy!" and drives away when his teen daughter tells him that she was threatened by a man. We hear that a man and his boss are bullying residents to sell their homes cheaply to two men. A high school bully roars and beats his chest in the school gym to impress classmates.
► A teen boy posts a video of a teen girl dropping her books, surrounded by captions of "stinks, stank, gross." A teen girl talks back to adults in several scenes, including the town sheriff. A teen girl and her father argue a few times about her vengeful behavior toward wrongdoers, and she argues with classmates a couple of times. A teen girl tells her father, "Shooting crows is murder." An elderly woman living alone tells a teen girl that she is glad not to be senile, but her house is haunted and she has felt that "her cheese finally slid off the cracker." A woman says that the legend of her house is that a man killed his girlfriend and another man buried them in a wall and killed himself, and she says she hears crying in the night. A teen girl is tearful as she says she wants to remember her dead mother (we never see the mom). A young woman cries and her mascara runs.

Nancy Drew and the Hidden Staircase SUBSTANCE USE

- A canister contains a gas that is identified as Myristicin and causes headaches and nausea and hallucinations, a towel with an unidentified liquid on it is used to choke and render a man unconscious (please see the Violence/Gore category for more details), and a teen girl asks people who feel sick if their food was spiked with drugs and they answer no. A man asks an elderly woman if she has been using a "special batch of Kool-Aid" (referring to alcohol) and she says no, a character is referred to as being "half in the bag," and a young woman smells the coffee cup of a rude clerk and finds alcohol and the clerk is later seen asleep on an office couch (likely passed out).

- Think things through and do what you think is right. 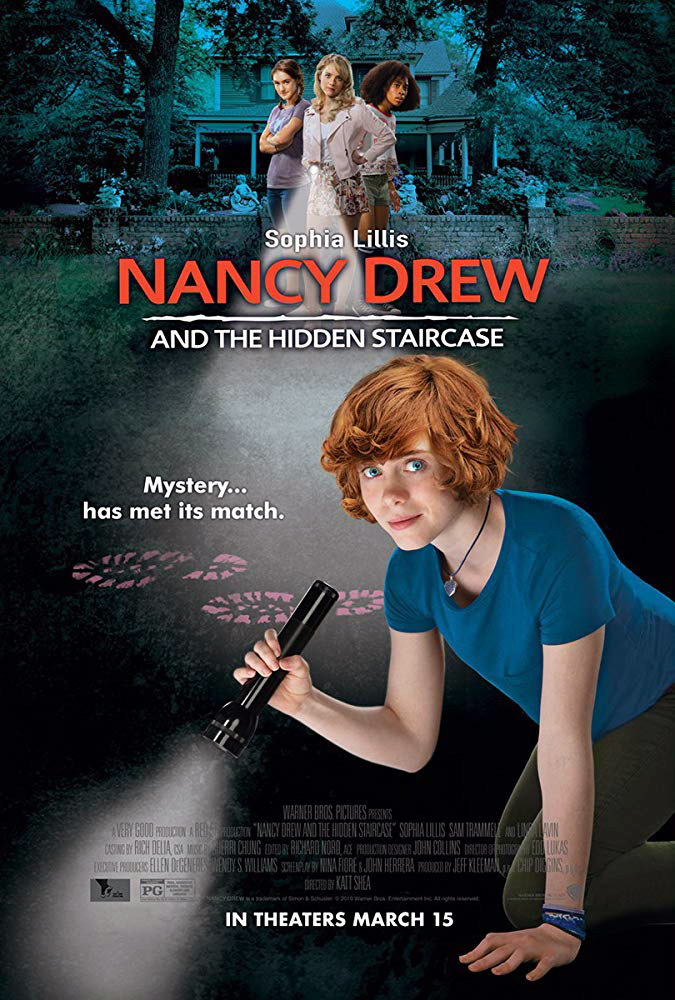