Steven Spielberg film about the events that followed the massacre of 11 Israeli athletes at the 1972 Munich Olympics: The assignment of a clandestine Israeli force is to track down and assassinate the Palestinians suspected of having planned the terrorist attack. However, revenge takes a personal toll on the team, especially on its leader (Eric Bana) who becomes increasingly troubled and doubtful. Also with Daniel Craig, Geoffrey Rush, Mathieu Kassovitz and Ciarán Hinds. [2:47]

SEX/NUDITY 7 - A husband and wife have sex: we see her bare stomach (she is pregnant) and legs, and his bare buttock, legs and chest; they moan, the man thrusts briefly and asks how late in her pregnancy they can continue to have sex.
► A husband and wife lie in bed together (he is bare-chested), she touches his face and kisses him, and they have sex (he thrusts violently while imagining scenes of violence).
► A woman wears a short robe, it slips open revealing cleavage, she drops it off her shoulders and reveals her bare breasts, and the robe falls open completely revealing her bare breasts and pubic region (the woman is shot twice; please see the Violence/Gore category for more details). A dead man is shown nude in a bed (his bare chest and bare legs are visible and his genitals are in shadow but evident). After an explosion in a hotel we see a naked man (he holds his hands over his genitals, and we see his bare chest and buttocks) and a woman in a bra and panties.
► A woman wearing a negligee stands on a balcony, her husband joins her, they kiss, he caresses her hip and buttock, and another man says that he will not sleep because the couple will be having sex all night.
► Several men are shown bare-chested while sleeping. Several men wear jockey shorts and tank T-shirts. We see several men and women in conservative swim garb by a beach.
► A woman asks a married man to have sex with her (he declines). A man says to his girlfriend that he thinks another man, "wants to go to bed with you."
► Several men dress up like women as a disguise (we see them putting on bras and panty hose). A man says he wants to see a man's genitals (to determine whether or not he is circumcised) to prove his loyalty.

VIOLENCE/GORE 8 - Armed men sneak into a dorm where they break into the rooms of several people and hold them at gunpoint -- we see this scene and the following events several times throughout the film and with increasing detail: A man is shoved against a wall and held with a gun to his chest, we see a dead man lying on the floor with bloody bullet holes in his back and a blood-soaked shirt, a man with a knife slashes at another man who shoots him through the face (we see the shot open the side of his face up and he bleeds profusely), a man is shot repeatedly and blood splatters and sprays on the wall behind him, a man is stabbed in the head with a knife, a man is shot in the back repeatedly (we see bloody bullet holes open and he jerks), several men are shot at as they run away from gunmen, several men are shot in a helicopter that then explodes, and several other men are shot in another helicopter (we see them with bloody wounds, blood spurts and they smolder).
► A woman is shot twice, once in the throat and once in the chest, blood spurts out of the wound in her throat as she gasps and she is shot in the head (blood streams from all of the wounds, and her robe falls open).
► A bomb explodes in a hotel room, one man is blown to pieces, we see puddles of blood on the floor and bloody extremities around the room (an arm swings from the ceiling fan) a man in the next room is blown through the air (he appears to be having trouble hearing), and a man and a woman in another room are shown with bloody wounds (the woman's head is bloody and she says she cannot see, and the man is covered with dust). We hear reports of an attack and see pools of blood being mopped up.
► Two men point guns at a man, they shoot him several times, he falls to the floor breaking a bottle of milk that he had been carrying and blood and milk form a puddle on the floor.
► Several men in a street shoot back and forth at each other, and one man is shot repeatedly in the chest and abdomen and falls to the ground dead (we see bloody wounds on his chest). Several men are shot at close range (we see them jerking when hit by the bullets but no blood is evident). There is shooting back and forth between many armed men, several are shown being hit by bullets and falling to the ground dead (not much blood is evident).
► Armed men break the doors of apartments down, they enter each one and shoot a man in each: a man is shot repeatedly (we see bloody bullet holes), another man is shot repeatedly (blood sprays and his mattress catches fire), a man and a woman are shot repeatedly while pleading for help (blood sprays and they flail), and a teenage boy is nearly shot. A teenage boy is shot in the head, and he falls back into a pool. A man is found dead in his bed (we see blood on the pillow behind his head).
► A man rolls a grenade into a room, a man inside the room tries to get out, the first man pulls the door closed, the grenade explodes killing the man in the room, and the door blows open and the blast knocks the other man down.
► A bomb explodes after a man picks up his telephone (that's where the explosive was planted), the windows of the room blow out and glass showers down on the street below. A house explodes with a man inside. A young girl picks up a telephone where an explosive has been planted, a man prepares to detonate it, and he stops. A man sits dead on a bench (we do not see the wound but are told that he was stabbed).
► There is a great deal of confusion and clamoring by people in the press at an airport where a hostage situation is underway; we hear a loud explosion, we see flames in the background and we hear that a number of people have been killed. We hear news reports of an airplane hijacking.
► A man is punched in the face, two other men join in the tussle, and they shove each other and yell. Several men hold guns on several other men who hold guns on them (it is tense until they all lower their weapons). Two men are shot at by many other men (they get away).
► There are several scenes of people planning out the murders of people (building explosive devices, determining locations and strategies for getting the victims alone).
► We see several groups of people watching TV news reports of a kidnapping and the deaths of the kidnapped and the kidnappers, and the people grieve. A man talks about all of his family being killed and a woman talks about her family being killed.
► A man frantically looks through his room for an explosive device suspecting that someone is trying to kill him. A man shoots a street light out.

MESSAGE - One violent act begets another. 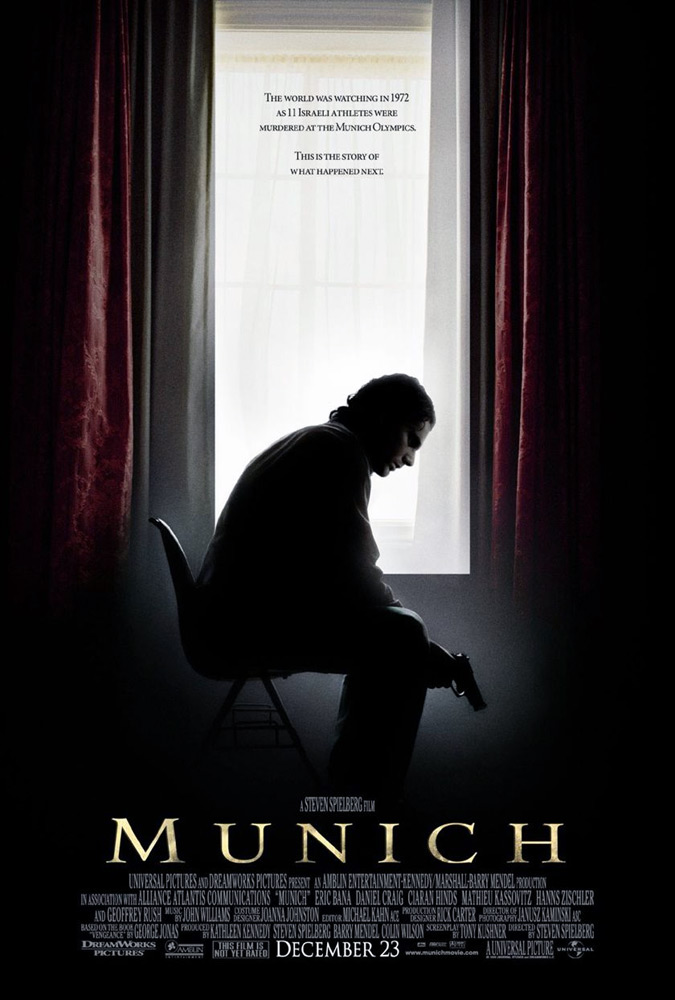