This sequel is set 10 years after the events in the original and Brendan Fraser stars again as the Indiana Jones-like adventurer who has to save the world from resurrected Egyptian mummies. This time out he's married and has a 9-year-old son who's also threatened by the ancient forces of evil. Also with Rachel Weisz, John Hannah, Arnold Vosloo, Donna Air, Adewale Akinnuoye-Agbaje, Freddie Boath, Oded Fehr, Dwayne Johnson and Patricia Velazquez. [2:08]

SEX/NUDITY 4 - There are eight kisses and some sexual innuendo. A woman is seen in a mesh outfit which exposes her buttocks and breasts. Women are shown in cleavage-bearing outfits a couple of times and scantily clad women in bikini tops and short skirts fight with swords.

VIOLENCE/GORE 7 - Many mummies arise and try to attack people. Reanimated, decayed corpses are seen in many scenes. There are fights with warrior corpses; people are thrown around, hit and choked; one warrior has no bottom half, and a warrior uses talons on its hand to cut a man's arm (there is some blood). A man blows a warrior's head off and pokes his fingers into the eye sockets of another one, leaving some goo on his fingers. A warrior is splattered on a tunnel entrance. There is an extended battle scene with a huge army on foot: there is hand-to-hand combat with knives, swords and kicking; bodies fly through the air, people are hit with swords and impaled -- there is no blood. There are many scenes with swordfights and these scenes also include punching, kicking and pushing. And there are many scenes with machine-gun and other gun fire and sometimes people are shot and killed. There is an extended swordfight between two women that also includes spears. A man throws a knife at another man and it pierces his throat and a woman stabs another in the abdomen (the woman seems to expire, but she is later "resurrected"). There is a knife fight between two women which includes a head butt and one is cut on the cheek leaving a bloody wound. And there is a knife fight between a man and a woman. A man is stabbed with a sword and cut, and a man turns into a huge scorpion and attacks people; he pulls a man to pieces and is stabbed. A man sticks his arm into a hole and we hear crunching; when he pulls it out we see only bones and goo. A woman impales herself and a man is decapitated. A man is cut across the throat with a sword and we see blood on his throat and at the corner of his mouth; a man is cut across his chest and we see some blood. A man sucks the life from another and we see the victim rapidly decay and later see his desiccated head. There is a fistfight between a man and a woman leaving a spot of blood at the corner of her mouth. A man has a bloody cut on his arm. We see a bloody cut on a man's cheek and blood on his neck, and blood on another man's cheek. A scene shows women being devoured by beetles, and people get stuck in quicksand and a creature hops on their heads pushing them under and drowning them. Some small creatures kill people with blow darts (these creatures explode when they are shot) and some people are killed by being stung with many darts in their chests. People are also stabbed by these creatures, some repeatedly. Some demons try to pull men into a fiery pit and one does fall. A man nearly falls into a fiery pit, and a man nearly falls into flames. We see black shadows entering a man's body while he's shaking. An army of "dog" warriors swarm a city, and there's an extended battle scene between them and humans -- when these warriors are decapitated they explode into sand. There's another battle with "dog" warriors in an extended scene which includes chasing and reckless driving; when these "dogs" are shot pieces fly off. A maelstrom of little creatures surround some people. There are many jump scenes and lots of deadly insects and snakes threaten people; there are skeletons in a tomb along with lots of bugs and scorpions; a bunch of beetles explode through the ground and crawl under people's skin; a man vomits beetles; bugs and scorpions crawl up a man's leg, and we see a torrent of scorpions; a snake rears up to strike a man, and people throw a snake at each other. We see a collection of shrunken heads, we see skeletons and skulls in cages and impaled on poles, and there's a close-up of a wizened corpse which screams in a man's face. We hear squishy sounds as people walk on spiders, and we hear crunching and growling sounds as people walk through high grass and then they abruptly disappear. A woman kicks a snake aside and it nearly hits a man. Flames are used to deter attacking beetles. A woman is bound with ropes and nearly thrown into a fire, and a few people fall into flames and catch fire. A bookcase falls and crushes a man. In the desert people fall down dead from the heat. Two people are levitating, hit each other midair, and then slam into concrete pillars. A man is nearly decapitated in battle and he falls off his horse, and a man nearly stabs a boy's hand. A wall of water with a face depicted on it nearly swallows a dirigible with people onboard. A flood in an underground tunnel nearly drowns some people and the earth shakes in many scenes. There are a few scenes of debris, buildings, etc., falling on and around people, and fires and explosions in a few other scenes. A falcon is shot and killed off camera. A couple falls through glass and a boy nearly falls from scaffolding. A boy hits a man in the head and on his behind with a slingshot (the man is in pain). A man bites the head off a scorpion, leaving some stringy goo.

MESSAGE - It's not safe to mess with death. 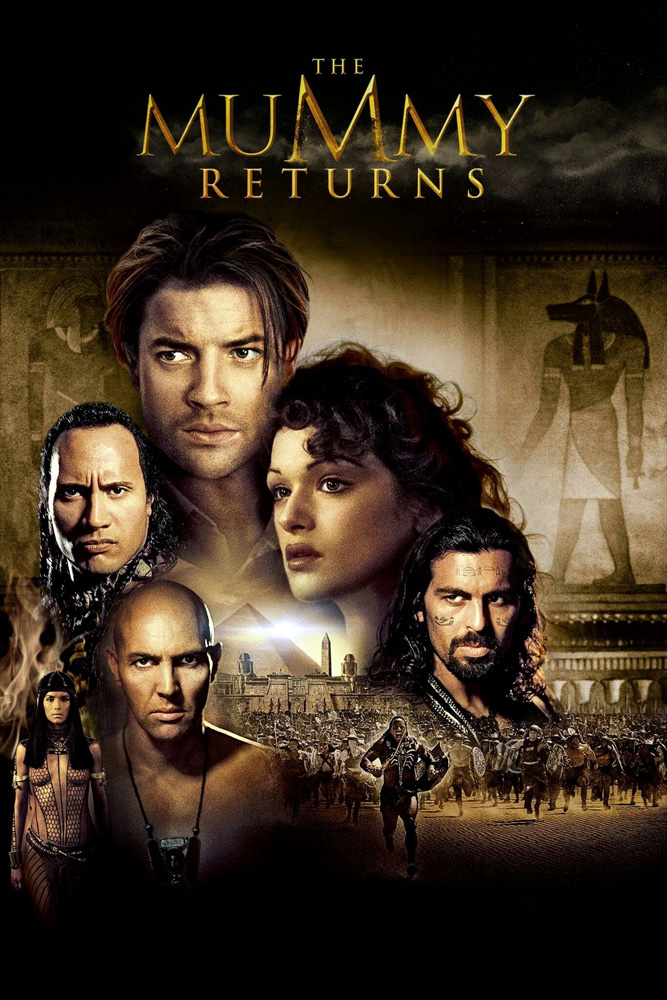