A respected business man (Kevin Costner), loving father and husband, is also a successful serial killer, who struggles with an inner voice (William Hurt) that urges him to commit murder. One night he murders a couple without realizing that a neighbor (Dane Cook) has seen everything through an open window, and now he wants to become his accomplice. Meanwhile, a relentless police investigator (Demi Moore) is on their trail. Also with Matt Schulze and Stephen Michael Ayers. Directed by Bruce Evans. [2:00]

SEX/NUDITY 7 - A man and a woman have sex, we see thrusting, and we hear moaning (her bare breasts and buttocks are visible and his bare chest and buttocks are visible).
► A man and a woman kiss, she unbuttons her jacket, (we see her bare abdomen, cleavage and lace bra), the man kisses her chest and abdomen, she reclines on a sofa and they are then interrupted by another man in the room.
► We see photographs of a nude dead man and woman in several scenes (bare buttocks, breasts, and chest are visible). A nude man stands in front of a kiln and his bare back and buttocks are visible. A woman wearing a bikini is shown swimming in a couple of scenes (we see cleavage, bare back and legs through water). A man is awakened and we see him bare-chested and in boxer shorts. A man is shown wearing a T-shirt and boxer shorts. A woman wears a low-cut top that reveals cleavage.
► Men and women dance together in a dance studio and a man sitting in a café on the sidewalk below watches them. A man enters a house and hears a woman moaning in another room.
► A husband and wife kiss and snuggle in bed (the scene ends). A husband and wife kiss in few scenes. A wife kisses her husband on the cheek.
► A college-age daughter kisses her father on the lips and hugs him, and then sits on his lap (it is not clear whether there is a sexual context).
► A young woman tells her parents that she is pregnant and that the father is married with children. A man tells another man to go and have sex with his wife. A man talks about the sexual sensation of committing a murder, and a man talks about the sexual sensation of watching a murder being committed. People talk in several scenes about a couple that liked to have sex with the windows open so that anyone could see them. Using crude terms, a man talks about liking sex. A woman talks about another woman's dress and that you could see her nipples through it.

VIOLENCE/GORE 8 - A man with a gun enters a room where another man and a woman are having sex: the woman screams, the man shoots her in the head and then shoots the man (we see the bloody bullet holes in their foreheads and they lie motionless on the bed, and we see this scene a few more times, accompanied by very loud screams and gunshots).
► A man strikes a man on the leg with a shovel, then strikes him on the head, and then slashes his throat with the shovel's point -- blood spurts and sprays, the man thrashes and twitches briefly and then goes limp; he is then pushed into a grave.
► A man is stabbed in the neck with a pair of scissors, blood spurts and sprays, his hands are soaked with blood, walls are smeared with blood as he reaches out toward his assailant, and he then falls limp (this turns out to be a nightmare).
► We see a murder scene with two dead bodies on a bed: there are bullet holes in the wall behind them and bloody fingerprints on a lampshade. We see photographs of two dead bodies that have been posed in various positions. We see a dead man and woman lying on a bed: the man is lying on his back and the woman lies on top of him with her head at his waist (their bloody gunshot wounds are visible).
► During a gunfight a man and a woman exchange fire with another woman, who follows them and manages to shoot the man in the shoulder and the woman in the leg; eventually the two fall down a flight of stairs, and the man shoots the woman and himself in the head (blood splatters on walls around them and we see their limp, blood-soaked bodies).
► A woman is tackled and shoved into a van that speeds through streets, a man holds her down and presses a gun into her face; she struggles with him, kicks him, grabs the driver by the hair and pulls, the van swerves and crashes into another car throwing the woman out the open door, and she falls onto another car and we see her later getting stitches to her large and bloody head wound.
► Armed police break into an apartment office with guns drawn, searching for someone, and when one closes a door a body strapped into a chair, with many hypodermic needles sticking out, swings down from the ceiling nearly striking a woman.
► A woman punches and kicks a man and holds a gun on him. A man threatens another man with a gun.
► A man with a gun enters a room where a man and a woman are kissing and caressing each other, and another man tells the man to shoot the couple; the woman screams and the scene ends (we hear later that they were murdered).
► A man breaks into another man's house, sits on his bed, startling the sleeping man, and then threatens to kill him. Two men enter a dark cemetery, one stands in front off an open grave, and the other holds a gun toward him and pulls the trigger several times but no shots are fired.
► A woman walking on a dark street is frightened when she hears someone running behind her; she hides in a doorway and pulls a gun out.
► A man pounds on the steering wheel of his car in anger. A woman breaks the glass on a framed picture. A man is nearly hit by a car while crossing a street.
► A husband and wife argue bitterly in a couple of divorce negotiation meetings and during one the wife says that she wished the husband would, "get hit by a truck and die." A young woman is questioned by police about a murder on a college campus.
► A man asks another man to kill him and tells him how to do it. A man asks a man if he'd have a problem killing a woman. A man tells a man that the next murder victim could be him. A man talks to a man about the rules of murder and how to avoid getting caught. A man tells another man that maybe a man will get killed while crossing a street and save them the trouble of killing him. We hear that a murder was committed using a hatchet. A man talks about the sexual sensation of committing a murder in a few scenes. We hear about a serial killer who hangs his victims. We hear that a serial killer has escaped from prison and might be looking for the police officer who put him in jail.
► A man hears voices that tell him to commit murders. We read, "The hunger returned to Mr. Brooks' brain" on the screen.
► A young woman (college aged) tells her parents that she is pregnant and is considering an abortion.
► A man says he needs to defecate and then urinates on the floor (we see the puddle).

SUBSTANCE USE - A man and a woman drink champagne, and people are shown with alcoholic beverages at a party (no one is shown drinking). We see cigarettes burning. There are people gathered at an Alcoholics Anonymous meeting and we hear that a man was using steroids and we see an apartment littered with empty drug vials.

(Note: A man is shown praying for strength in several scenes, usually just before committing a murder.) 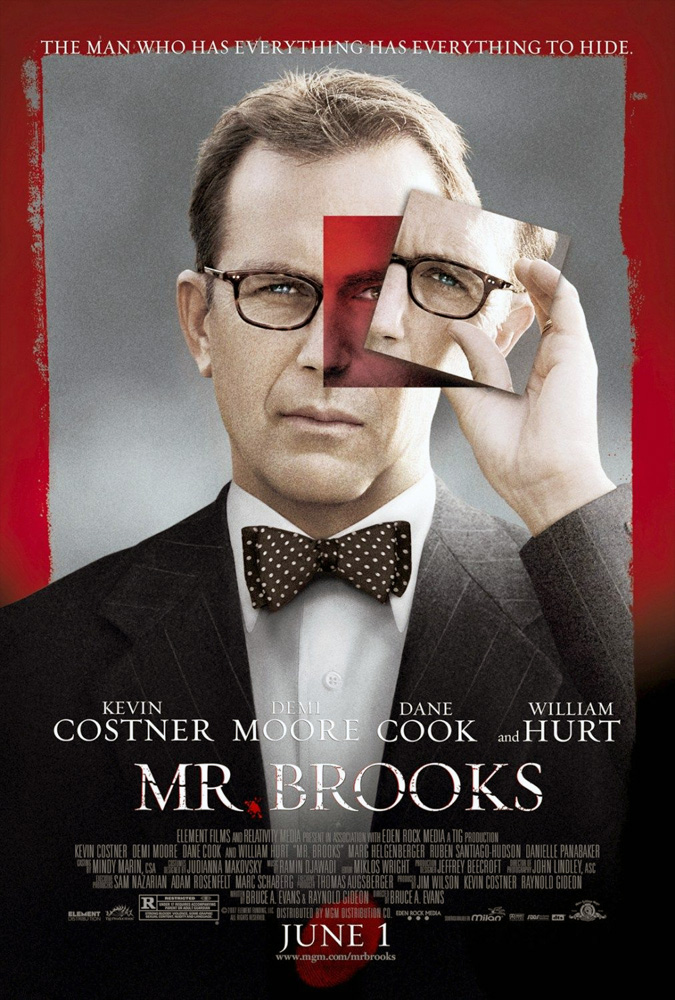