After the death of their mother, two British boys try to make sense of their new and confusing world. One day they find a bag full of money, and they decide that they have to spend it within a week, or it'll become worthless -- the money is British sterling pounds and Britain is in the process of converting its currency to the Euro. With James Nesbitt, Daisy Donovan, Alex Etel, Lewis McGibbon and Kolade Agboke. Directed by Danny Boyle. [1:37]

SEX/NUDITY 3 - An unmarried man and woman sleep in bed together (he is bare-chested and she has bare shoulders); the man's young son finds them, the man gets out of bed and we see him in boxer shorts. A man and a woman kiss, and a woman kisses a man on the cheek.
► Boys look at pictures on a website and we see one of a woman wearing a lace bra -- her cleavage and nipples are evident. A woman wears a low-cut top that reveals cleavage. A boy is shown changing his clothes and we see his bare legs and chest briefly. Men are seen bare-chested in a few scenes.
► A recently widowed man sleeps in a bed with a pillow formed in the shape of a person.

VIOLENCE/GORE 3 - A boy imagines a saint who talks to him and says he was "beheaded," and we see a bloody line across his throat and blood on his hand. In several scenes a young boy talks about saints and the injuries they endured: one such saint popped her eyes out; another saint was pulled on a wheel until the wheel exploded and sent splinters into the people gathered around it.
► We see a train robbery, where men drive a car through a fence, men pile out of the car, beat security guards with bats, get back into their car and are chased by other police in cars; the men stop and run on foot, and they are chased by officers and dogs.
► A boy is frightened when he thinks he is being followed by a strange man, the boy goes into his home, climbs up a ladder into the attic, and a man follows, pushes open the attic hatch and the boy screams. A man drops out of an attic door into a boy's room, and he threatens the boy. A man grabs a boy and shakes him, and a man grabs a boy by the shoulder. A man approaches a boy and appears threatening in a few scenes.
► A boy stands on train tracks and lights a fire, a train comes very fast, and the boy jumps to safety. A large duffel bag bounces high in the air and across the ground and crashes into a large cardboard box where a young boy plays (the box is destroyed but the boy is uninjured).
► A family comes home to find that they have been robbed. A young boy walks through where his now dead mother used to work and appears sad. Two boys talk about their mother being dead.
► A boy imagines large metallic lion heads coming to life and roaring at him. A saint talks about freeing caged birds, a saint talks about lepers. A boy imagines saints visiting him and talking to him. A police officer talks about the potential for robberies around the Christmas holidays. A man yells at his two sons.

DISCUSSION TOPICS - Death of a parent, Christian saints, relocation, prayer, generosity, greed, miracles, the poor and needy, free will, maturity, orphans, heaven, a child's jealousy of a new person taking the place of a deceased parent. 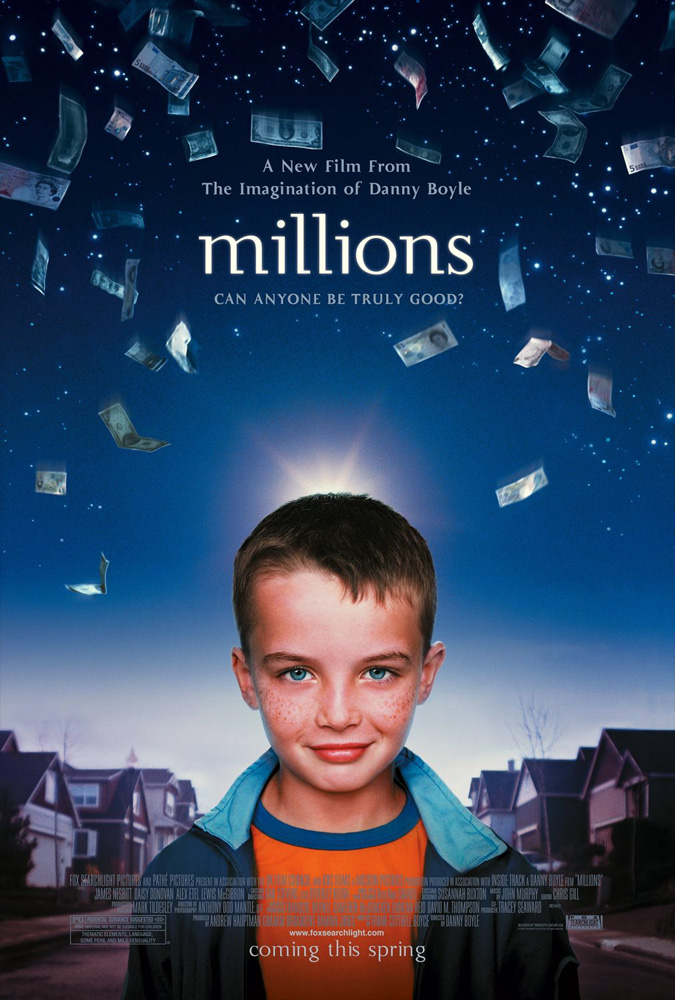