In this animated third sequel, the Penguins, the Chimps and King Julien (voiced by Sacha Baron Cohen) win a fortune in Monte Carlo while the Central Park Zoo animals (voiced by Ben Stiller, David Schwimmer, Chris Rock and Jada Pinkett Smith) are stuck in Africa. Deciding to swim to Monte Carlo to find the Penguins, they run afoul of a Police Captain (voiced by Frances McDormand) who wants to mount their heads on her wall. Also with the voices of Tom McGrath, Chris Miller, Christopher Knights, John DiMaggio, Conrad Vernon, Andy Richter, Bryan Cranston, Jessica Chastain, Martin Short, Cedric the Entertainer and Paz Vega. Directed by Eric Darnell, Tom McGrath and Conrad Vernon. [1:25]

SEX/NUDITY 2 - A French policewoman wears a tight-fitting uniform that outlines thin insect-like legs, a small waist, huge buttocks and extremely large, pointed breasts; she is nicknamed by circus animals as Senorita Grand Hoops for her large bosom, and someone looks at her and says, "Ooh la la"; French and Italian policemen stare at her backside with wide eyes and open mouths.
► A male lemur falls in love with a female Russian bear and we see his eyes widening and glazing over and his mouth hanging open; the lemur says he likes a hairy back in a woman and rubs her fur as his friends stare at him with gaping mouths.
► A male lemur and a female bear hug several times. A female hippo and a male giraffe dance romantically together, declaring their love. A male lion and a female jaguar hug each other several times.
► A penguin points his butt at another animal, slaps it, and says, "Kiss my padunkle." A zebra says to a pack of small dogs, "You need to get back inside your mother's womb, because you are too cute to be in the outside world." We hear that a French Canadian circus includes a human that performs in the nude.

VIOLENCE/GORE 3 - Animals run inside a huge police assault vehicle and they are chased by the police: we see scooters run off a bridge without hurting riders and several parked cars are overturned, the police vehicle sails off a road landing on top of a hotel roof and leaving a parked car in the street bursting into flame (no one is harmed), and an airplane fires bananas at a woman, who chases the police vehicle (she dodges and is unharmed); the animals climb a rope to the plane, the woman grabs one of their feet, lets go and somersaults through building windows, reconnects with the animal foot and is finally dumped into a rooftop swimming pool unharmed.
► A bear beats up a police officer, but we see no injury.
► A large plane crashes and many police cars with sirens and flashing lights chase the animal passengers (they are uninjured and jump onto a train). Large animals fall through a glass ceiling in a casino and are not harmed.
► A police officer fires tranquillizer darts dozens of times at animals, people and seemingly into the audience; animals that are struck fall asleep and are unharmed, and people that are struck fall down and we see them later in a hospital with leg casts, body casts, a head cast and metal head braces.
► A woman walks on feet and hands like a spider and then like a dog; she sniffs rods and rail tracks, sneers and threatens to cut animals' heads off. A woman carries a handsaw several times in an attempt to remove heads from living animals, but she always fails to make blade contact. A wall in a woman's office is entirely covered with mounted animal heads of all kinds and a shadowy display of large-toothed leg-hold traps.
► While on a train, a knife throwing circus tiger twirls a dagger and in several scenes throws daggers, spears and cleavers at animals, creating outlines around them. A pack of small circus dogs argue and threaten bodily harm twice with knives and a broken wine bottle but no one is harmed.
► A tiger jumps through a small flaming hoop and we hear that he was badly burned because he used olive oil to smooth his hair, but we do not see his injuries; later, he looks at his hoop collection and imagines flames that fill the screen. A dozen cobras escape their zoo pit, slither into a pool in another cage, and strike into the audience with wagging tongues.
► A woman rolls under a train that passes over her without harm. A zebra and a sea lion are each shot from a cannon several times: in one scene, each one hits a rock wall, but is unharmed and rappels down with a rope; later, a woman is fired from the cannon into an empty lion cage, where she roars loudly. A lion hangs from the roof of a moving train, runs across the top of several cars and hoists himself through a boxcar door.
► A lemur buys a motorcycle for a bear using a stolen ring; the shopkeeper is arrested by several police officers that point many handguns at him, seemingly from the audience. A bear and a lemur argue and wrestle around a boxcar floor, but the lemur jumps away and leaves.
► A nuclear reactor powers an SUV and explodes (it does not harm anyone). A police officer enters a hospital ward and shoots out all of the lights but one with her dart gun.
► Large animals practice walking a tightrope and swinging in a trapeze act, falling into nets or swinging around a tightrope by the neck; no one is hurt. Several aerial circus acts appear at night in sequence on wires and swings attached under hot air balloons with rainbows, neon lights, fireworks and flashing lights filling the screen for several minutes.
► A police officer shoots several rounds from his handgun into the ceiling of a jail cell, penguins knock out the officer along with several other officers, and the camera cuts to the inside of packing crates where we see the officers tied, gagged and duct-taped; we then see the outside of the crates marked "Madagascar" with a large freighter ship transporting them, as the officers scream.
► Three lemurs step on slimy fish bones in a train car and red eyes in the darkness are illuminated to reveal a bear in a tutu on a tricycle.
► A lion has a nightmare in which a giraffe is old and gray, seated in a rocker and having an IV drip, while an elderly hippo uses a walker; the lion wakes up and complains to a zebra that he and his friends will be old and wrinkly and die in Africa if they do not escape.
► A TV is thrown out of a hotel window and into the audience, we see a pillow fight inside the hotel room and pillow feathers flying, fireworks fly into the audience and burst into colors and a zebra falls into the audience unharmed.
► A lemur vomits mass quantities of pink cake icing. A bear slobbers several times on one lemur. A human woman laps up dirty water from a deep footprint.

SUBSTANCE USE - A woman frequently fires a tranquilizer gun at people and animals and when hit the people or animals fall asleep, after being tranquilized a lemur stumbles and slurs his words, a tranquilizer dart is marked with skull and crossbones as poison, a woman receives a tranquilizer dart in the buttocks and falls asleep, and a woman sniffs the ground and we see a large golden puff of aroma as dust enter her nostrils and we see her visualizations of animals swirling above her head like in an hallucination. Small dogs argue and threaten one another with broken wine bottles.

MESSAGE - Friendship and freedom are the most important things in life. 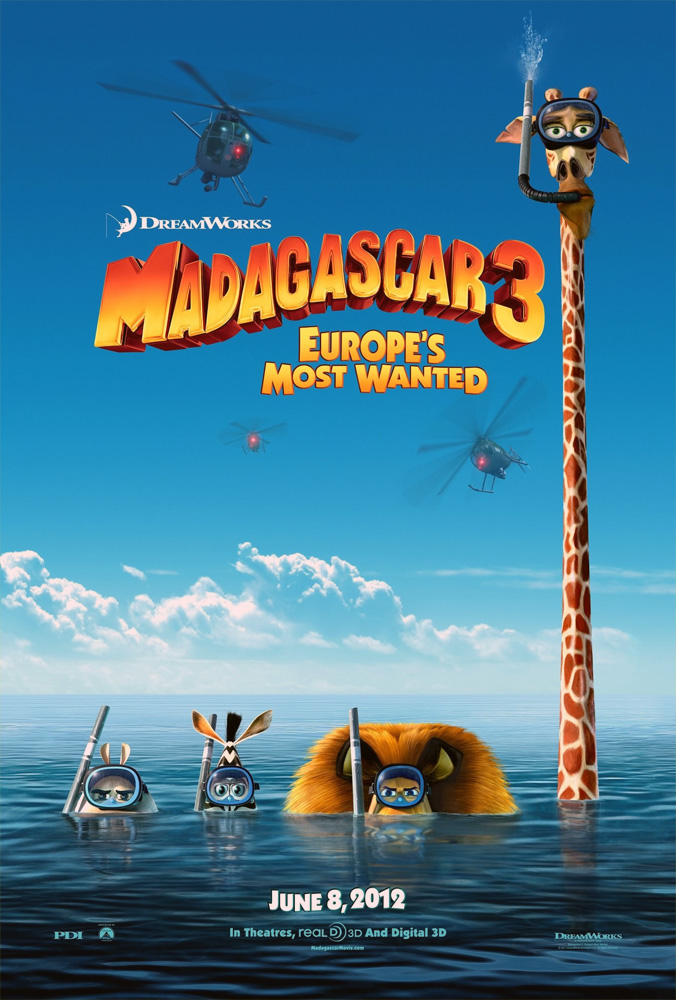