Animated feature about four residents and star attractions of the Central Park Zoo in New York City -- a lion, a zebra, a hippopotamus and a giraffe -- who are also best friends. When the zebra is inspired by a penguin to visit the wild, and all of them end up inadvertently in the Madagascar jungle, and they have no idea how to take care of themselves. With the voices of Ben Stiller, Chris Rock, David Schwimmer, Jada Pinkett Smith, Sacha Baron Cohen, Cedric the Entertainer and Andy Richter. Directed by Eric Darnell & Tom McGrath. [1:20]

SEX/NUDITY 1 - A female hippopotamus comes out of the ocean with star fish on its chest and a crab strategically placed over its crotch, strikes a pose, and tells the sea creatures, "OK boys, the fun's over."
► A lemur sings about women moving their bodies. A lion dreams about steak and describes it in romantic terms.

VIOLENCE/GORE 4 - Foosas (hyena-like predators) look threatening, move in packs, and threaten many lemurs -- they surround a small one getting ready to pounce; they also attack a zebra and threaten several animals. A lion scares them off on several occasions and they scatter. A small lemur is terrified of being eaten by a lion, and whimpers and cries -- the lion has no culinary intentions.
► We see a bird eaten by a carnivorous flower, and a duckling is swallowed by a crocodile.
► A human skeleton attached to a parachute hangs from a tree; a decrepit plane is nearby. A lemur uses a human skeleton hand to point and make gestures.
► Many animal control officers, with their guns drawn and looking scared, surround several animals, and shoot a lion in the buttock with a tranquilizer dart (the lion is shot on two different occasions). A police officer asks if he can shoot a zebra.
► A woman beats up a lion by hitting it on the head with her purse repeatedly, and also kicks it in the crotch. A hippopotamus hits a lion with a large stick and keeps hitting it (it's trying to save it from a spider on its back). A penguin knocks a man out with a strike to the neck, and a penguin hits a man in the face (the man is tied up and his mouth is taped). A penguin slaps another penguin in the face in several scenes.
► A giraffe is stuck in a crate, a lion tries to help it out by pulling on its ears, then charging toward it with a tree trunk, the trunk seems set to hit the giraffe in the private parts (he stops in time) and it moans. A lion is hit in the face with a tree branch, it steps on a thorn, a tree falls on it and it's caught in a large spider web. It is also hit by a coconut and falls down a waterfall.
► A zebra puts his head in a lion's mouth (they're friends). A lion tackles a zebra, throttles and shakes a zebra (not fatally) and a lion licks a zebra while thinking of steaks. A lion chases a zebra and threatens to eat it and "its clones." A hungry lion jumps and bites a zebra's backside (they're friends, but the lion is starving and hallucinating about steaks); we see the zebra later with a large Band-Aid on its backside.
► Lemurs run away when they are frightened by something coming through the jungle. A character talks about something "ripping our limbs off." A penguin says that he and his fellow penguins killed some humans and "had eaten their livers" (he's kidding). Animals yell at each other in several scenes.
► A zebra falls off a treadmill and crashes into a stone wall. A giraffe gets his head stuck in a large clock. A hippopotamus crashes through a stone wall. A giraffe gets his leg stuck in a subway train door, and then he gets his head stuck in the subway train door. We hear squealing tires and gunfire in the distance.
► During a storm at sea, four crates with animals in them are dumped overboard and crash into the very rough water; one animal is scared. A lion wakes up in a crate, it panics and hyperventilates. A giraffe is a hypochondriac and we see him having acupuncture treatments.
► A zebra inadvertently puts a rectal thermometer in his mouth. A zebra spits on people and performs armpit raspberries. Many animals are having cocktails made out of seawater and they keep spitting them out. A penguin spits up a paper clip, and a giraffe almost chokes on a noisemaker. We hear a toilet flush. A character asks, "Who wipes?"

SUBSTANCE USE - Animal control officers shoot a lion in the buttock with a tranquilizer dart, twice, and both times the lion hallucinates (it sees psychedelic shapes and sequences). Many animals are having cocktails made out of seawater.

MESSAGE - Keep your life fresh by changing the routine. Don't be afraid of change. 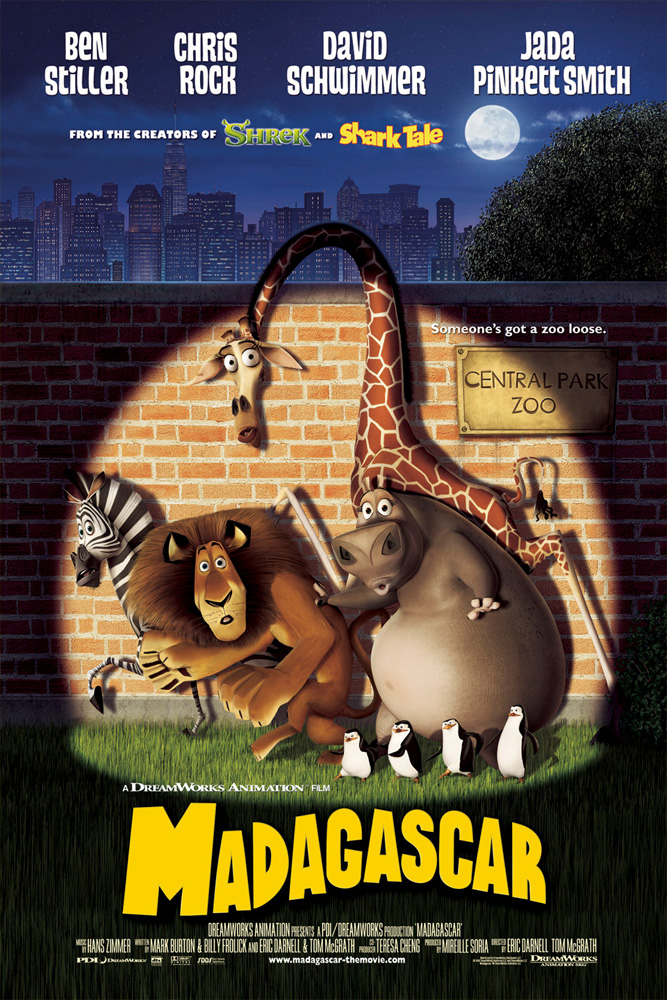