A U.S. Marine (Zac Ephron), on his third tour of duty in Iraq, finds a discarded photo of a woman (Taylor Schilling). Keeping it in his pocket, he is convinced that the image saved him from death several times and when he returns home, he walks across the country on foot in search of the woman in the photograph. He finds more than he bargained for, but also more than he dreamed. Also with Blythe Danner, Jay R. Ferguson, Riley Thomas Stewart and Joe Chrest. Directed by Scott Hicks. [1:40]

SEX/NUDITY 6 - A man and a woman have sex in an outdoor enclosure and we see the man thrusting against her as she leans on a wall and her loose skirt reveals bare legs wrapped around him; they go inside, undress (we see their bare backs, shoulders and arms as well as his bare chest), and we see thrusting and hear moans and gasps from both people. A man and a woman are shown having sex and we see thrusting, we hear heavy breathing and we see their bare backs and shoulders.
► Several passionate love scenes occur between a man and a woman with tight embraces and kissing. A man and a woman kiss briefly several times in different settings.
► A woman wears V-necked blouses that reveal cleavage. We see men, women and children wearing shorts and summer shirts that reveal cleavage of women. A small boy stands at home wearing only his underwear. A woman stands in a large bath-towel wrap that reveals bare shoulders.
► A woman is afraid of her long-term stalker (her ex-husband and the town sheriff) until she becomes angry and shouts at him, demanding that he stay away from her (please see the Violence/Gore category for more details); this ongoing battle makes her stop dating because she is afraid of relationships and love as well as losing custody of her son. A man tells his son that bleeding makes him a man and violin makes him some sort of sissy. We hear that a woman fell in love and got pregnant in college, married, and divorced, because her husband left when their baby was born and that he had never stopped dating other women.

VIOLENCE/GORE 5 - During a night raid with lots of loud gunfire, three soldiers are shot and die (no blood is visible). A Jeep blows up and we see smoke, flames and debris being thrown through the vehicle; we hear that one man died. Several intense battle scenes in Iraq feature gunfire and large explosions with flames, smoke and dust.
► A man and a woman argue, her young son hears the argument and runs out in a thunderstorm to his tree house with another man following: on the swinging bridge to the tree house across a rising river, the bridge breaks, the boy falls in, and one man dives in to save the boy, grabs the boy, gets his own leg caught in tree roots, another man jumps in, takes the boy to his mom on the bank and we see the tree house fall on the trapped man (we see the house fall apart and move down the river and we later hear that the man died.
► A sheriff harasses a man by following in a patrol car and shouting threats; later, he takes a bite of an apple and spits it in the man's face, but the man walks away. A drunken man pulls a handgun on another man's dog (please see the Substance Use category for more details), but the man quickly snatches away the gun, takes it completely apart, hands it back and walks away. A little boy has spots of blood on his Little League shirt and his parents argue about how he got a bloody nose (we see no blood flow).
► A soldier at home jumps several times when he hears gunfire from video games. Now home, a soldier's, nephew jumps on him in bed causing the man to wake up and slam the boy onto the mattress without thinking (the man is still acclimated to his military life); the child runs from the room screaming.
► A woman visits a graveyard where her brother is buried, and she returns to her home and kennel where she destroys a rose bush and several large crockery flowerpots as she screams and cries and her dogs whine; a man rushes to her, and grabs and squeezes her in an embrace until she calms down.
► We see several loud verbal confrontations between a man and another man who is harassing his ex-wife; the ex-husband continually threatens and intimidates the woman and threatens to take custody of their young son. A man frequently becomes angry, and he shouts and blames things on other people. A man's father belittles him several times. A man says that he almost killed a man. A man tells a boy's dad to refrain from hurting the little boy or the boy's mom; the dad looks embarrassed but angry as the man walks away. A man tells other men to stay away from his ex-wife and he spies on her when she goes on dates. A woman accuses a man of being a stalker. A woman argues several times with her grandmother, who tells her that a new employee of theirs found her picture on a battlefield and walked across the country to find he; the younger woman shouts that she is not ready for a relationship. A woman says she suspects her brother died in Iraq from friendly fire. A man tells a woman that he met her brother in a night raid and saw him die trying to save one of his men in an enemy ambush. A man tells a boy whose dad is a bully that the man suffered bullying in elementary school. A soldier thinks often of a dead soldier who was in his unit in Iraq and he mentions that the man is dead and that the black dog tags he wears are in that man's honor. A woman says that her brother died in combat and her parents died in an auto accident. A man says that his dad died of a heart attack. We hear that a grandmother had a stroke but recovered.

SUBSTANCE USE - A party tent in an Iraqi combat zone is full of soldiers drinking beer as they listen to a live band, a town sheriff appears drunk in several scenes while drinking shots and beer in a bar or drinking beer at home and a friend's house causing him to stumble and slur his speech, several bar scenes show bottles of liquor and wine on the back bar and bottles of beer on tables as men and women drink beer and cocktails, a man and a woman drink beer and wine at a bar, a man and a woman at a dinner at home handle beer bottles but do not drink, nearly-empty wine glasses are seen on a dinner table, we see many bottles of wine on the counter in a kitchen, and a grandmother goes out with friends and returns home drunk (she giggles, weaves as she walks and slurs her words).

MESSAGE - Some things are meant to be. 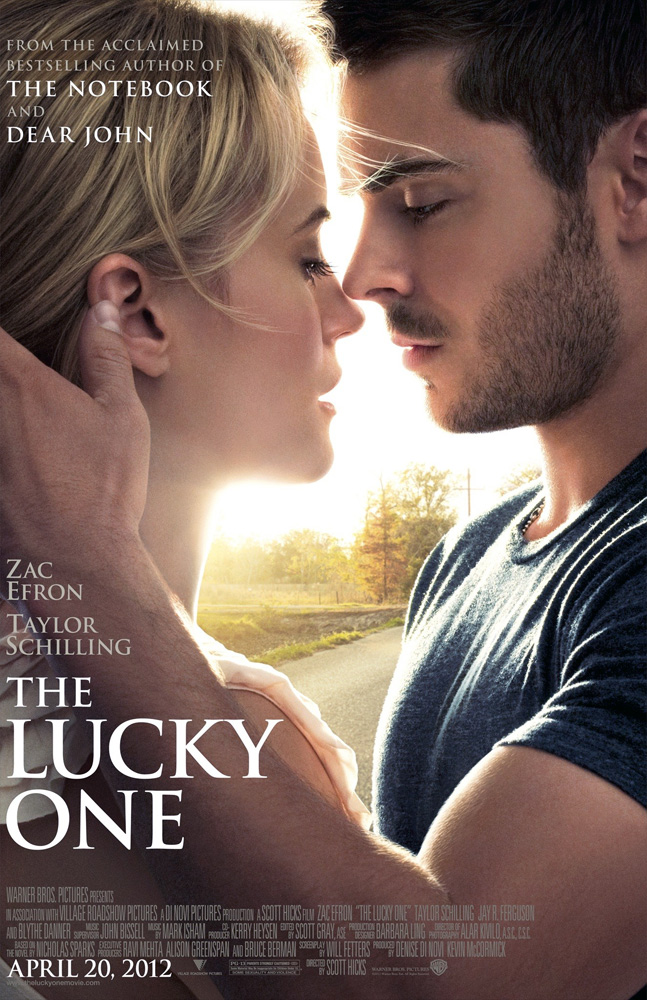