The Looney Tunes characters are placed in a world where they are stars of the Warner Bros. studio and get to interact with human characters. The story revolves around the efforts of the son (Brendan Fraser) of a movie star and secret agent (Timothy Dalton) to save his father and the world from the mad machinations of the ACME president (Steve Martin). Bugs and Daffy help out the good guys, while the Tasmanian Devil, Wile E. Coyote and others help ACME. Also with Jenna Elfman, Billy West and Heather Locklear. Directed by Joe Dante. [1:30]

SEX/NUDITY 2 - A man and a woman sleep together on the ground. A man and a woman hug, and two animated characters kiss. A woman wears a low-cut dress, then she pulls it off on-stage and dances wearing fishnet stockings and a jeweled bandeau. Women in a casino wear outfits that reveal cleavage, and a woman wears a very short skirt with stockings. A woman wears a skintight rubber suit that reveals cleavage and her figure. A man asks a woman, "How'd you like to do a little kissing later?" A car (mechanical arms in a steering wheel) pulls off a woman's clothes and dresses her again in an evening gown that reveals cleavage and bare shoulders. A man's "rocket pants" shoot off him leaving him in his boxers. A woman wears a low-cut blouse that reveals cleavage. There are a couple of references to an animated character's cross-dressing. An animated character makes a comment about "smooching." A woman opens a shower curtain and finds a rabbit bathing (we see his face).

VIOLENCE/GORE 3 - There is cartoon violence throughout the movie (animated vs. animated characters, and animated vs. live characters) as well as violence between human characters: A duck (animated) is shot repeatedly in the face (his bill is twisted around on his head, then it is blown off and gets stuck in a nearby tree, etc.) a cat's (animated) tail is cut off by garden sheers and he screams, a rabbit knocks a duck's (both animated) eyes out and they roll on a table, a dog punches a coyote in the face (both animated), a rabbit (animated) is shot (we see him in bandages later), and a duck's (animated) tail catches fire; also, a huge crate lands on a coyote (animated), a coyote (animated) is burned by rocket fire (we see him charred), birds jump on a cat's head (all animated), a rock falls on a duck (animated) and he's squished flat, a duck (animated) is turned into a puddle after being zapped, a laser cuts off a duck's (animated) head and a rabbit (animated) kicks it, a Martian (animated) is sucked out of his space craft when he opens the window, and a duck (animated) and a rabbit (animated) kick a man in the face repeatedly. A rabbit and a Martian (both animated) fight using a bubble gun and a light saber. A duck (animated) is hit by a cannon ball and it flies around back stage. A duck threatens a rabbit (both animated) and says "cram it down your rabbit hole." A Tasmanian devil (animated) is released from his cage, we hear snarling and tearing and then see a human man's skeleton. A rabbit (animated) screams and re-enacts the "Psycho" shower scene: he falls, tearing the curtain down, and uses chocolate syrup, which looks like black-and-white blood, in the water going down the drain. A man slams a man's (animated) head in the lid of a chest repeatedly. A man chases a duck (animated) through a movie set: they run through scenery, the man falls off a roof and onto an airbag below, and the man grabs the duck around the neck. A man (animated) holds a gun on people and chases them. A man yells at a duck (animated), the duck eats a fish from a fish tank and the man reaches down his throat and retrieves it, a duck (animated) throws an apple and hits a man in the face. A man punches a duck (animated) in the face a couple of times, closes a car window on his bill, a woman punches a duck (animated) in the throat, a woman punches two men (animated), and a man fights many animated characters with punching and kicking (one falls over a railing, one jumps over a railing). A man (animated) is hit by a board, and a duck runs into a door (animated). A flying car plummets to the earth and runs out of gas before crashing. A car crashes into a water tower causing it to tip over and spill its water: water washes over and fills a car with a woman and a rabbit (animated) inside. A car chase between human and animated characters has them driving recklessly through streets: a stick of dynamite is lit, it explodes in the animated car and the characters are charred, the human car races through streets in reverse, and the animated car crashes through a wall and onto a stage (people in the theater run and scream). A space craft (animated) crashes into a building and the people inside run and scream. Darts shoot out of a wall and a man deflects them with a machete. A woman jumps from the Eiffel Tower, grabs onto a man who dangles from a rope ladder attached to a helicopter, the woman falls, another man jumps after her and catches her in mid-air. A man fights off other men with punches and kicks in a few scenes: in one scene he throws a grenade behind him, we see an explosion and he is grabbed around the neck. A man is tied to railroad tracks surrounded by dynamite, and with a blade swinging over his chest; he is threatened by an oncoming train, another man jumps in front of the train and the train speeds by (they're uninjured). A man (tied to a chair) kicks several men trying to interrogate him. A man is zapped in the head and he turns into a monkey. A man punches a man in the nose, and a man hits himself in the face repeatedly. A large clawed creature with many green eyes and many legs threatens people before it is grabbed and put into a large glass encasement. Several aliens come toward people in a threatening manner: the aliens are slimy, one has its brain exposed, one has spike on it, one wraps itself around a man's neck, and two others shoot at the people. A huge mechanical dog grabs a man by the pants and throws him into a pile of crates, and the dog continues to threaten the man and a woman and keeps them from going around. A man falls over a railing, crashes onto a table, he stands up and the table hits him on the back (it's an audition for a stuntman position). An alien lies on a table in a laboratory. A rabbit fires a missile out of a car and it explodes in the distance. An animated character flatulates.

MESSAGE - All the Looney Tunes characters have their place and are all necessary. 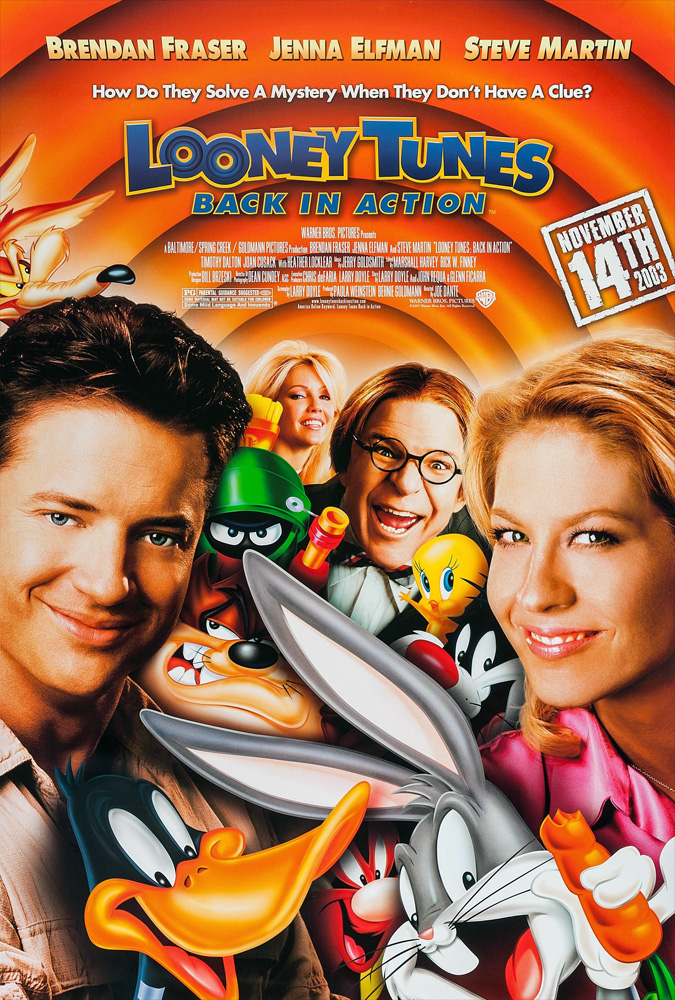