Why is “The Lie” rated R? The MPAA rating has been assigned for “language throughout, some violence and brief sexuality.” The Kids-In-Mind.com evaluation includes a couple of hugs and kisses, a man is killed by being run down by a car and we see the bloody result, a teen girl is feared dead when she goes missing, a few fights with one leaving a bloody nose, several arguments, a few scenes of a teen girl struggling to breathe and using and inhaler, and 12 F-words and other strong language. Read our parents’ guide below for details on sexual content, violence & strong language. A 15-year-old girl (Joey King) confesses to a dreadful act and her parents (Peter Sarsgaard and Mireille Enos) spiral through a series of lies to try to protect her from the consequences. Also with Cas Anvar, Patti Kim, Nicholas Lea and Devery Jacobs. Directed by Veena Sud. [Running Time: 1:37]

– A husband and his wife kiss goodbye at the airport. A man and woman kiss and hug. A man and woman sleep on a sofa and snuggle in each other’s arms.
► It is implied that a man is having a romantic relationship with a woman and that he told his teen daughter not to tell her mother about it. A teen girl seems to be flirting with a friend’s father. A man says, “The girl’s pretty hot,” about a teenage girl. A teen girl asks her father, “Do you think she’s pretty?” and a man asks another man, “What’s with your ladies bro?”
► A woman wears a low-cut blouse that reveals cleavage. A teen girl sits in a bubble-filled tub and we see her bare shoulders and knees.

– A man is run down by a car and we see a long bloody smear on the road: the man has a bloody face and head, he pleads for help and then falls motionless. A man argues with a man and a woman as to where his daughter is and when the man tries to talk to their daughter, the other man grabs him and the first man punches him in the face (we see his bloody nose). A man grabs a woman and she screams, another man attacks the man, they fight, and one holds the other underwater in a stream; the woman pulls him away and they leave the other man coughing and gasping. Two teen girls walk through a snowy, wooded area and when they don’t return, a man searches for them, he hears a scream in the distance and when he finds one girl sitting on a bridge railing over a rapid running stream, the girl tells him that the other girl fell in; the man runs into the stream to find the girl, he falls in the water briefly and is unable to find her. A woman wakes up with a start after dreaming about seeing a teen girl dead with bloody head wounds and torn clothing (which we see).
► A man confronts a teen girl on a sidewalk and grabs her, she screams and runs away; a car follows her on the street and when she gets to her house she has trouble breathing and uses her inhaler a few times before calming down. A man and woman argue, their teen daughter yells at the man and he shoves her to the floor and storms out (no injuries are seen). A man pounds on the front door of a house and rings the bell, and then pounds on the window in the back of the house calling for a teen girl inside the house as she hides and looks frightened.
► A man talks about arguing with his daughter and that he grabbed her and she ran away. A woman is startled when her doorbell rings and she speaks to the father of a girl that’s gone missing (she’s her daughter’s friend). A woman argues with her teen daughter to call a man and tell him that she hasn’t seen his daughter; the teen turns up the volume of the TV and the woman becomes angry and turns it off. Police interrogate a man as to whether he is abusive to his daughter. A police officer asks a man what his nationality is, in a demeaning manner. A woman yells at a man and asks him about a purse she found in his car (it does not belong to her). Police question a man and a woman and present an email with a death threat to a teen girl. A woman is stern with her teen daughter and quizzes her about how her sweater got torn; the woman comes out of the bathroom later and she seems upset. A teen girl yells and cries and says, “I pushed her and she fell.” A woman yells at her ex-husband several times. A man and a woman argue about what they should do about their daughter. A teen girl talks about her friend’s father and says that he has a bad temper and that he hits her friend. A woman says of her daughter, “There’s something wrong with her.”
► Blood is shown on the front of a car, on rags after the blood is cleaned, and in a sink when bloody water is poured down the drain. A teen girl has a bruise on her jaw. A teen girl has cut marks on her arm and she tells her father that it helps her deal with the pain; she tells him that no one likes her at school. A man is shown with a cut on his hand and we see some blood.
► A woman burns a sweater in a fire pit. A pre-teen girl gets her ears pierced and whimpers when it hurts. A family runs through a parking lot in a thunderstorm to get to a store. A man digs a hole in a backyard and buries an item in the hole.
► A teen girl vomits while having trouble breathing and we see goo. A teen girl asks a man to pull a car over because she has to urinate (we do not see her urinate).

The Lie SUBSTANCE USE

– A teen girl uses an inhaler in several scenes when she has difficulty breathing.

– Lying can cause irreparable damage. 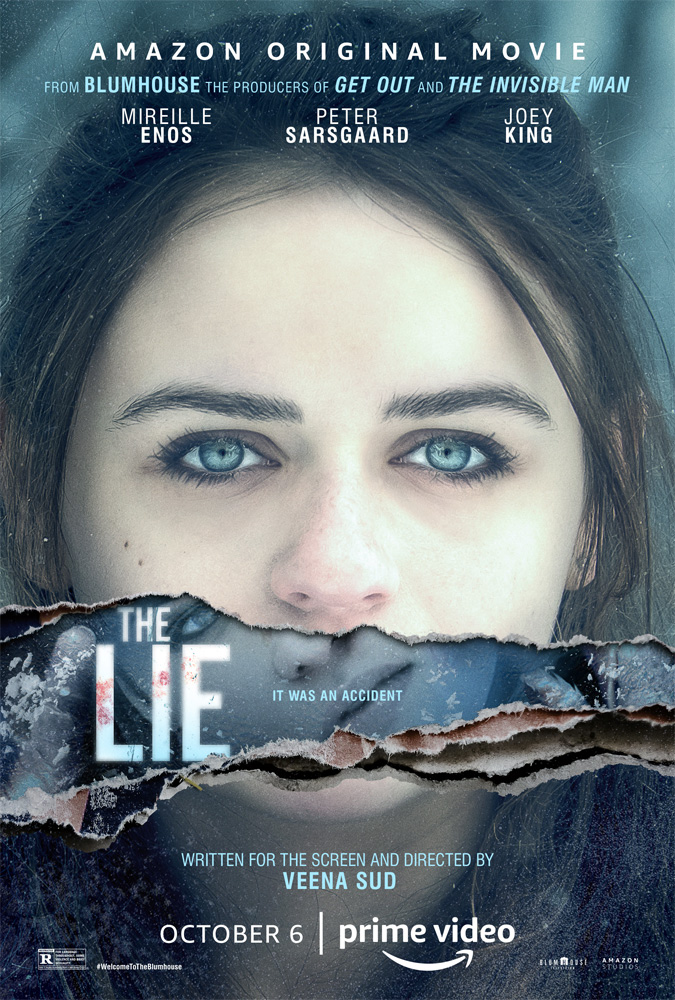