The story of the WWII battle of Iwo Jima, as experienced by the Japanese soldiers who struggled to defend the island from the attacking U.S. forces. With Ken Watanabe, Kazunari Ninomiya, Tsuyoshi Ihara, Ryo Kase and Shido Nakamura. Directed by Clint Eastwood. [2:21]

VIOLENCE/GORE 8 - Several soldiers hold grenades in their hands, they pull the pins and hold them close to their chests, whereupon they explode (we hear splatters and see the bloody remains of each man with large holes in their chests and a bloody dismembered hand holding a family photograph).
► Many soldiers are transported from ships to a beach by smaller vessels, they make their way up a mountainside, and soldiers with guns inside turrets and dugouts open fire on them; we see many men struck (the men yell and fall to the ground, we hear bullets whizzing by and crunching when they strike, and we see blood spurt when men are struck).
► A soldier's arm is blown off (we see the bloody tissue and severed arm and blood pours from the wound), and he twitches and bleeds to death.
► Soldiers charge toward a camp, they exchange gunfire, they fight hand-to-hand and one soldier is pounded on with a gun.
► A soldier blows fire into a gun turret, and a man from inside the turret emerges in flames and falls to the ground. A flamethrower sprays down into a cave and a soldier is set on fire (he thrashes and screams and is then shot).
► Three soldiers beat an enemy soldier, who screams and pleads, and then they stab him repeatedly (we hear crunching and the screaming stops).
► An officer shoots himself in the head (we hear the splattering of blood and matter as it sprays another soldier in the face). A wounded officer orders a soldier to kill him, the soldier raises his sword and is then shot and falls to the ground; the officer then shoots himself in the chest. During an attack an officer is struck down and we see him with a large bloody wound on his face (he has been blinded); he is left in a cave and we hear a gunshot as the other soldiers leave the cave for safer ground.
► Planes fly overhead and fire on soldiers on the ground: there are many explosions, and men are struck by the gunfire and fires burn.
► A young man walks around a man who is seated and motionless, and finds him dead with a large bloody and charred wound on his head and face. Wounded soldiers are piled into a cave and treated (we see bloody wounds and missing limbs).
► A soldier is surrounded by other soldiers with guns, he swings a shovel at them and yells, and they hit him on the head with a gun. A soldier punches another soldier in the face repeatedly and kicks him.
► A soldier shoots two other soldiers at close range and we see them die. Several solders are shot down as they run, and one is shot, and falls on his own grenade, which explodes. Many soldiers are struck by gunfire and fall to the ground dead, in many sequences throughout the film.
► An officer lies on the ground surrounded by dead bodies, and he panics and appears to have a mental breakdown.
► We see many wounded soldiers with bloody bandages lined up on a beach waiting to be transported away.
► An officer orders a soldier to quiet a barking dog by shooting it, the family of the dog protests, and the soldier cannot go through with it, so the officer does it (we hear the gunshot, the barking stops and the family members scream and cry). A man realizes that his horse has been struck by a bullet (we see the horse whimpering with a large bloody wound on its side).
► Gunships fire guns at a beach and mountain where many soldiers are waiting. Soldiers in caves hear the repetitive sounds of bombs crashing on the ground above and around them (periodically rubble and dust fall on them).
► An officer straps explosives to his chest and threatens to jump in the path of a tank, blowing himself and the tank up. A shell crashes to the ground near a man, knocking him to the ground, but it does not explode.
► An officer holds a sword to the throat of a soldier and threatens to kill him. A soldier holds a gun on another soldier.
► An officer speaks to his soldiers saying: "Do not expect to live through this battle. No one is allowed to die without taking 10 enemies with you." A commander asks for permission to lead a suicide mission.
► We see the remains of tanks and bombed out gun turrets on Iwo Jima. We see soldiers digging foxholes and they wonder if they are digging their own graves. A woman worries about what she will do when her husband dies at war.
► A huge number of American sailing vessels approach Iwo Jima and some of the soldiers are frightened. A soldier jumps when a large bug crawls on him and he then steps on it. Air raid sirens blare.
► A soldier carries a latrine pot out of a cave (we hear sloshing and he reacts as if it smells).

SUBSTANCE USE - A few men smoke.

MESSAGE - Most of the time wars are a bigger sacrifice of lives and resources than we should be willing to endure. 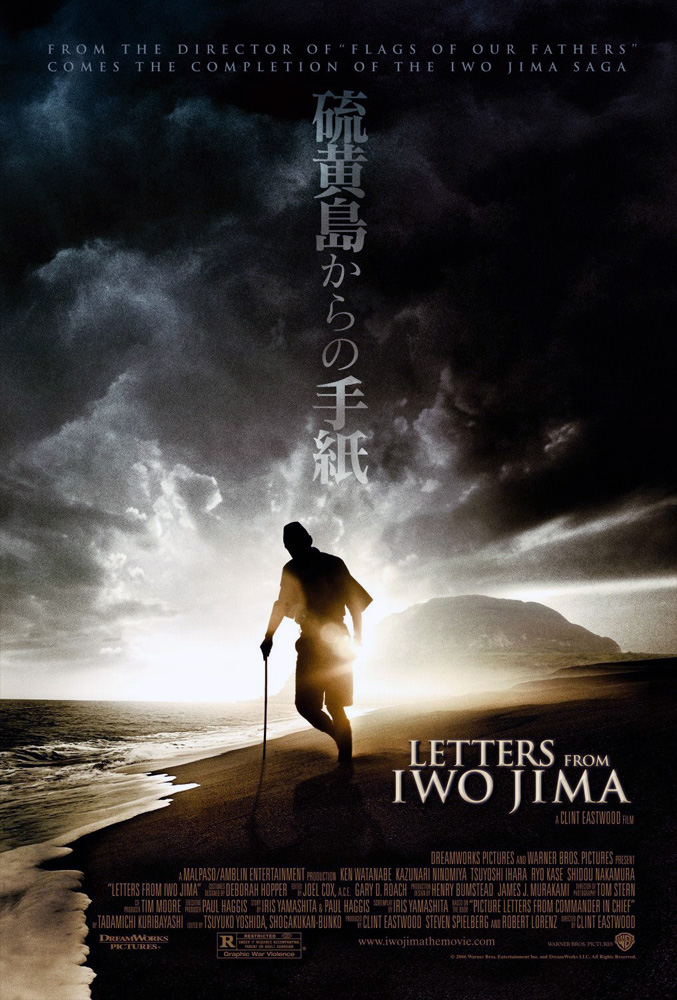