Why is “Let Him Go” rated R? The MPAA rating has been assigned for “violence.” The Kids-In-Mind.com evaluation includes an implied sex scene and some kissing, an accidental death when a man is thrown from a horse, a few scenes of threatening language and behavior, a few fights with one ending with a man’s fingers being chopped off, several shootings ending with bloody wounds and death, a house fire, and some moderate language. Read our parents’ guide below for details on sexual content, violence & strong language. When a young widow (Kayli Carter) remarries, her new husband’s abusive and possessive clan also takes in her young son, to raise him as their own. While still grieving their son’s death, the boy’s grandparents (Diane Lane and Kevin Costner) leave their Montana ranch, determined to rescue their young grandson from the dangerous family. Also with Lesley Manville, Booboo Stewart, Jeffrey Donovan, Will Brittain, Ryan Bruce and Adam Stafford. Directed by Thomas Bezucha. [Running Time: 1:54]

– A wife hugs her husband around the back, they kiss and he presses her against a wall (sex is implied). A wife kisses her husband. A woman wears a full slip and we see cleavage. We see a baby’s bare abdomen and chest a couple of times.

– Four men and a woman barge through a hotel door and attack a man and a woman in the room: the man is pushed against a wall, the woman tells the other woman that her son has been hitting his wife and child and the second woman hits him twice in the face and he then hits the other woman hard in the face. A man is slammed into a wall and he falls groaning on the floor, another man grabs a woman and the first man holds a gun on him; two other men attack him and get his gun, he is punched in the stomach and his hand is held on a desk as another man brings an axe down cutting several of his fingers off (we see the fingers separated by the blade and blood and the man screams). A man loads a shotgun and enters a house at night, holds the gun on a man sleeping in bed and hits him in the head with the gun to knock him unconscious when he tries to yell for help; a fire burns in another part of the house and several people run to try to extinguish it, a man grabs a woman and shoves her down a flight of stairs, another man drops a young child over the railing for the woman to catch him and they leave the house as the man fights with other men and a woman shoots at him hitting another man in the head (blood splatters on the wall behind him and we see the bullet hole in his forehead); a man is shot in the shoulder (we see blood), another man is shot and the first man is shot again in the chest (we see blood) and a woman is shot and we see blood spray on the wall behind her.
► A horse returns to a farm without its rider; a man gets on the horse and searches the area, finding the first man dead on the ground (we see his twisted limbs and we are told that his neck was broken when he was thrown). A man remembers finding his son dead after being thrown from a horse; he puts him on the back of a horse and rides back to the ranch. A man and a woman talk about having to put a horse down and we see the man holding a gun to the animal’s head (we hear a gunshot off-screen). A house is engulfed in flames and collapses and we understand that there are several bodies inside.
► A man tells a man and a woman to follow him to a farm where their grandson is and the woman rides with the man in the truck and her husband follows in another car; the man in the pickup speaks threateningly to the woman. A young boy drops his ice cream off a cone and a man laughs at him, yells at him and slaps the boy in the face; the man then grabs the boy’s mother by the arm and slaps her in the face also. A woman chides a man and a woman for not inviting her to her son’s wedding. A husband argues with his wife and shoves her. A husband confronts his wife about needing to let her grandson go. A young woman becomes defensive when asked about what she does with her young son when he goes to work; she replies, “Maybe you think I just tie him to a tree.” A woman asks a young woman to let her take her young son home with her and the young woman says, “He’d kill me.”
► A man discovers a loaded gun under the seat of his car and reprimands his wife for putting it there. A woman goes to visit her grandson and is told that he and his mother left town with her new husband. A woman opens a box with a gun in it and packs to search for her grandson.
► A woman talks about how her family members died over the years. A man remarks negatively about a preacher on a radio and his wife talks about his father thumping his bible; the man says, “It wasn’t just his bible he thumped,” implying he was beaten when he was a child. A young man talks about running away from Indian School after government agents took him away from his home and family, cut his hair off and washed him in kerosene “To get the Indian out of me,” and put him in the school. When a woman says that she won’t eat at a woman’s house, the second woman says, “Maybe you’re a Jew,” since she is serving pork chops.
► We see a man in a hospital bed with his hand wrapped in gauze. A man has a rough scar down the side of his neck. A doctor stitches a man’s hand and we see a bloody cloth and a woman’s shirt is also bloody. A man gags and coughs in a car and tells the driver to pull over (we do not see him vomit).

Let Him Go SUBSTANCE USE 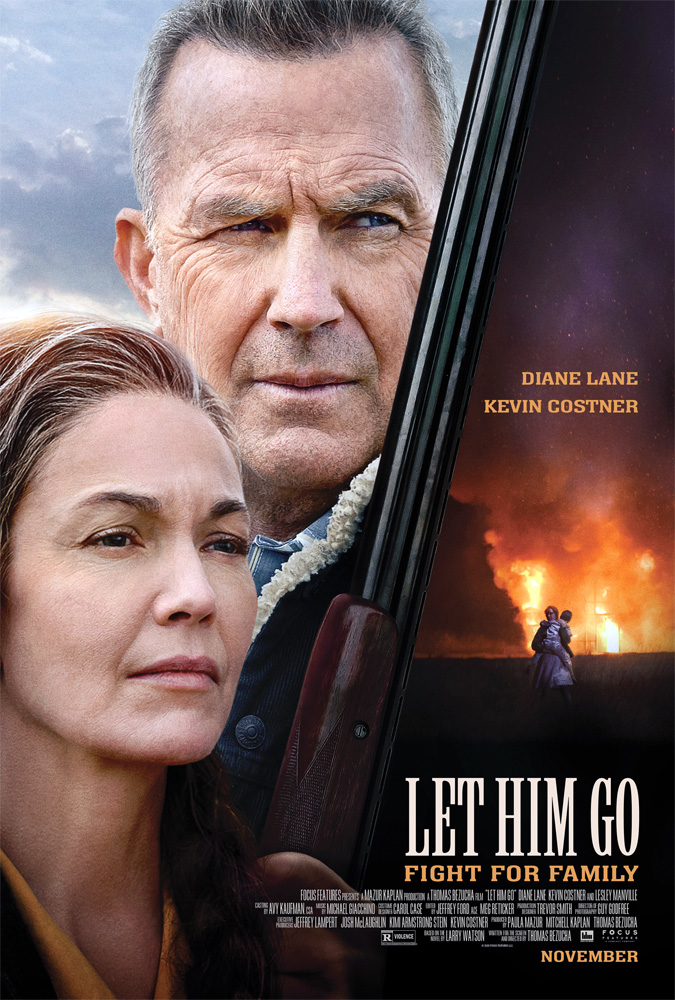