Jim Carrey stars as Count Olaf, the distant relation to the three orphaned Baudelaire children. As their guardian, the cunning Count hopes to snatch the vast fortune inherited by the children. At 14 Violet is the bravest and oldest Baudelaire; Klaus, 12, is intelligent and obsessed with words; and the toddler Sunny speaks in a language only her siblings can understand and has a knack for biting. Based on Daniel Handler's popular "Lemony Snicket" books. Also with Meryl Streep, Emily Browning, Kara Hoffman, Billy Connolly, Cedric the Entertainer, Jude Law and Liam Aiken. Directed by Brad Silberling. [1:53]

SEX/NUDITY 1 - A man forces a 14-year-old girl to marry him by threatening to harm her young sister; the man is much older and a distant relative. A man flirts with a woman. A woman's dress is low-cut and reveals cleavage.

VIOLENCE/GORE 4 - A woman is left in a boat that is attacked by vicious leeches (we hear her scream) and we see a banana peel pop to the surface (she had eaten a banana earlier). A house on a cliff is teetering over a dark sea, and it begins to break apart due to strong winds: three children are still inside and struggle to get to land, a stove bursts into flames, a doorknob shatters, a refrigerator tips over and slides out of the house, and they are trapped on a platform that remains; they break a beam that causes the platform to tip and allows them to jump back onto the cliff. A swarm of leeches swims toward a small boat with three children and a woman inside, the leeches pound against the sides breaking holes through and causing the boat to begin to fill with water (we see the leeches in a frenzy and the water churning around the boat). Three children are locked in a car that is left on railroad tracks, a train speeds toward them, and the track is switched just before the train crushes the car. A man with a metal hook on his hand attacks a boy. A man shoves a boy's head into water pretending that the boy is drowning and the man is saving him. A man forces a 14-year-old girl to marry him by threatening to harm her young sister (the toddler is hung in a cage, high over the ground). Three children find a dead man (we see his lifeless hand). An enormous snake lunges toward a boy (we see its long fangs): he is uninjured but the toddler he is holding is frightened and cries. A man is chained to the front of a speeding train (we hear him screaming). A man threatens to kill three children, and a man with a knife threatens three children. A man hits a boy in the face causing him to fall back onto the floor. We are told that a woman has committed suicide; we see a large hole in a window and presume that she has jumped into the sea below. A crowd of people surrounds a man. A man falls back off a platform into the sea, a man is trapped in a car on railroad tracks and a train approaches, and a man is attacked by leeches. A boy shoves a man to the ground (the man has a wooden leg). A woman describes a man having died by being eaten by leeches (she describes their having very sharp teeth and attacking in groups). A man yells at a man. A man tells a girl that she will rub his bunions after they are married. Three children sail a small boat into a dark cave. A man with a sword beheads a mannequin. A toddler bites a man's leg, and a toddler bites the head off a toy elf. A man tells three children that their parents have died in a mysterious house fire, and we see smoldering rubble as they walk through the remains of the house. We hear several other reports of people dying in mysterious fires. Something in a cage lunges toward a man. A piece of paper burst into flames. A man reaches toward a door, and an eye-shaped hole opens startling him. Three children walk toward a very dark and decrepit house. Three children go into a house that teeters on a cliff over a dark sea. A snake wraps itself around a man's shoulders (he does not appear in danger). A rat crawls through a kitchen cabinet and squeals when the door is opened, and large and creepy-looking insects skitter inside cabinets. A man's house is filled with lizards and snakes of various types (e.g. a two-headed snake, and a three-eyed toad). There are many skeletons of reptiles and birds throughout a house. A boy touches a spyglass that is hot, he recoils and we hear a sizzle. A man pretends to be jolted in an electric chair, and a man pretends to be a dinosaur and contorts his face and body. We hear eerie music and see a man walking through fog. We see children being forced to do many menial tasks: washing large piles of dishes, scrubbing floors, etc. A woman talks about fearing doorknobs (if they should break and a shard should fly into her eye), refrigerators (they could crush you if they tip over), ovens (they could explode), realtors (she screams when one comes to her door), etc. A toddler dangles from her teeth while biting a table. A toddler follows, and then plays with a large snake. A boy throws a stick and a toddler catches it in her teeth.

SUBSTANCE USE - A man offers Port to another man (he declines) and two actors drink from a flask and a bottle in a paper bag.

MESSAGE - There is good in the world, despite appearances to the contrary. Family makes a home wherever they are together. No one ever listens to children. 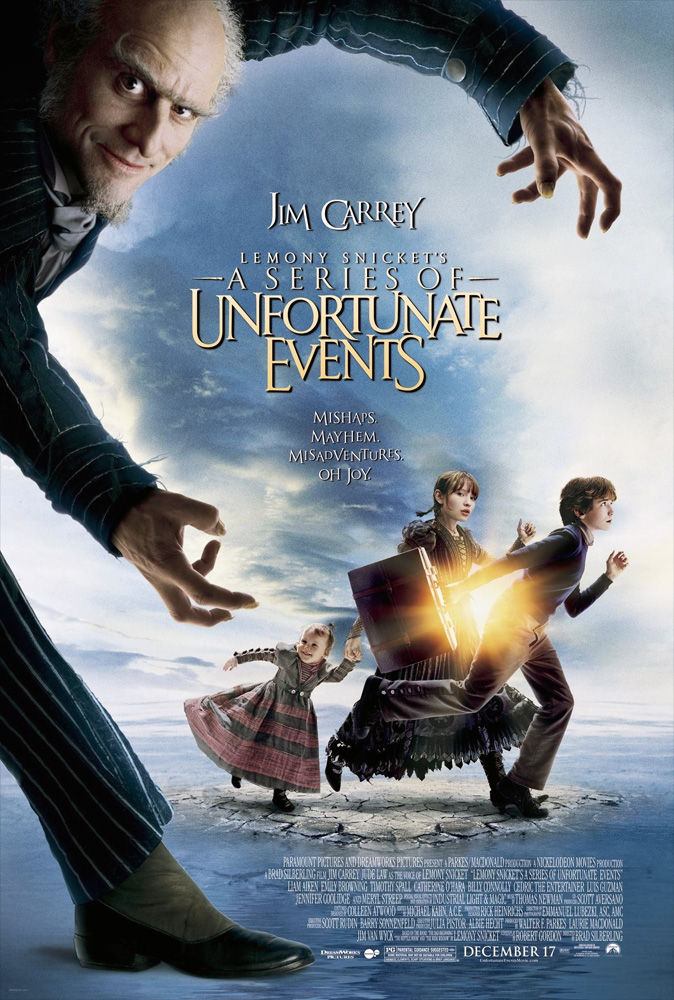