Why is “The Lego Movie 2: The Second Part” rated PG? The MPAA rating has been assigned for “mild action and rude humor.” The Kids-In-Mind.com evaluation includes some Lego hand holding, a shirtless male superhero character, several battle sequences with property destruction leaving a desolate future world, a few fight scenes with clinking of plastic bodies hitting each other, and a few scenes of peril where characters are nearly harmed, characters drink champagne and beer and coffee (and talk of addiction to caffeine), and some mild language. Read our parents’ guide below for details on sexual content, violence & strong language.”

In this sequel the citizens of Bricksburg face danger from Duplo invaders from outer space, who wreck their town. An ensuing battle to defend the original Lego universe takes characters to far off planets and tests their abilities to survive. With the voices of Chris Pratt, Elizabeth Banks, Will Arnett, Tiffany Haddish, Stephanie Beatriz, Charlie Day, Alison Brie, Nick Offerman and Maya Rudolph. Directed by Mike Mitchell. A group of raptor dinosaurs speak in trills that are accompanied by English subtitles. [Running Time: 1:47]

- War scenes and fights look as if performed by actual Lego bricks and Duplo characters; this includes bricks put together as small fires, gunfire, space-gun laser blasts, running lava, muffled explosions and smoke that all look like Lego plastic pieces.
► Flying saucers cloud the sky over a Lego city and large Duplo characters say, "We're here to destroy you"; heart-shaped bombs are thrown and make muffled explosions as Duplos march through town, break down buildings and Lego characters run and scream as laser blasts hit buildings and break them up; five years later, we see the city as a wasteland and characters drive large rusty vehicles through the desert, while other characters wrestle in dirt streets (reminiscent of the Mad Max world.
► A jeep escapes other vehicles as it drives through a building and a billboard, landing in dirt, and then driving through a house and demolishing it. A superhero fires dozens of missiles at a colorful space probe, but the missiles bounce off; the probe explodes into smoke with a muffled sound. A male character uses rubble from a house to build a spaceship and chases a kidnapper into outer space through a wormhole filled with asteroids and whirling staircases and nearly runs into an asteroid. A crew of raptors grab huge space guns and leave a spaceship with two male characters and onto a dark planet where neon light filaments lift the raptors away and babbling flowers chase the male characters; one of the male characters drives a jeep through the flowers and a shockwave knocks all the flowers down.
► In a fight scene, the plastic characters clink as they hit their chests together and slap at each other; one character punches the other, who falls down and cries out. Two female figures fistfight in an extended scene and one hits the other character in the head with a large lollypop; one figure falls over a ledge and the other figure grabs her to save her. Two characters fall under a clothes dryer in two scenes and they are left for a long time; one character is saved and the other figure disappears little by little until he vanishes. A male character punches a towering cake and a huge temple several times, until everything collapses and other characters run away, screaming.
► A large female space-alien character shape-shifts to become a horse, a building, the outline of a woman and a creature with multiple arms; she plays pop music to brainwash five characters who then decide to stay on the female's planet. A village is full of glittery characters who are addicted to pop music; hundreds of them chase two male characters, singing pop music, until the two characters escape.
► Glowing lava fills a large vat and a character falls into it, but is pulled out unharmed. Two characters fall off a cliff and off-screen. A golfer runs off-screen with his hair on fire. A male character whips another male character with a plastic whip as they run off-screen. An army general fires play stickers onto a few characters, gluing them together, and then kidnaps a female character into a spaceship. A female character throws round discs at another character, but they do no damage. A female figure is put into a dark room with loudspeakers blasting pop music and she escapes. A three-tiered couch turns into a Transformer character, but then falls apart. A large character eats a plastic heart with a snap of its jaws. Two male figures each pound a large hole, one into a sidewalk and one into a tower. A cat changes from a small cat into a giant, snarling Battle-Cat type of figure with guns and cannons attached in a few scenes. Several characters fall long distances without being hurt. An "eject button" on a toy hits a character in the buttocks. A banana falls down two flights of over 100 steps while shouting in fear, and then walks with two canes. Large amounts of toy bricks and figures are dumped into storage bins, where we see one superhero's face jammed into the rear end of another superhero, both male.
► A flashback shows a male character dismantling several toys and using parts to build a big time machine ship. A flashback shows a male character crashing his ship into an asteroid, but surviving unharmed. In two dream sequences, many characters fall down a black hole, screaming, "Nooooo!"; "Ar-Mom-Egedden" is mentioned.
► A human mother forces her two children to place their thousands of plastic bricks and characters in storage bins after the children argue and the Mom steps barefoot on two plastic bricks, crying out in pain. Two characters argue. A group of characters argue, a male character and a female character argue, and another male figure argues for several seconds with a large female character.
► A small star toy vomits a rainbow of glitter, with retching sounds. A large cat vomits a rainbow hairball against an alien spaceship, but no damage occurs. A banana is shown in a tattoo parlor chair, receiving tattoo designs all over his skin.

The Lego Movie 2: The Second Part SUBSTANCE USE

- A female character pops the cork on a champagne bottle and rides it like a rocket as the bubbles explode out, two male characters seem to drink beer from glass mugs at a tavern and then break the mugs, and a male character drinks something unknown from a goblet. A male character and a female character are addicted to coffee and say that coffee runs the world, and three raptor dinosaurs drink coffee in several scenes.

- Siblings can learn to get along as they work together to solve problems in their own make-believe universe. 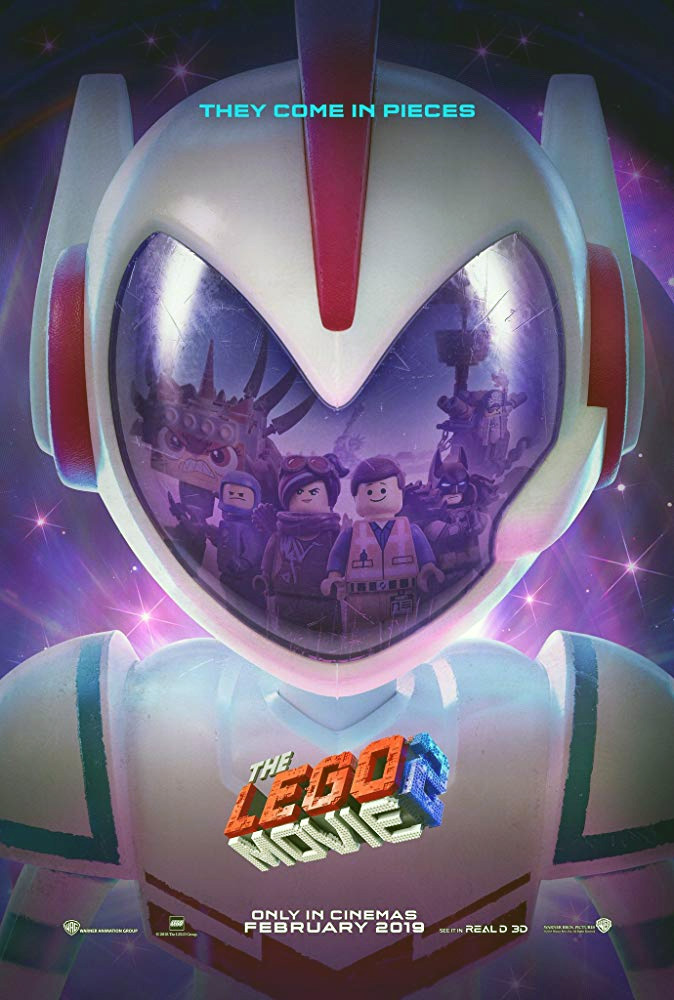