A celebrated and decorated three-star general (Robert Redford) pleads guilty at his court-martial, is stripped of his command and rank, and ends up in a military prison run by a warden (James Gandolfini) who controls the inmates with violence and cruelty. Defiantly, the general hatches a plot to take over the prison and remove the brutal warden from his command. Also with Mark Ruffalo, Clifton Collins Jr. and Delroy Lindo. [2:00]

SEX/NUDITY 2 - A man grabs his crotch during a verbal argument (it's meant as an insult). A man removes his shirt and we see scars which we are told were caused by electric shock torture in a POW camp. We see men in a prison with bare chests several times. A man wears a tank T-shirt which exposes his bare shoulders. A man stands with his hand on his crotch throughout the movie.

VIOLENCE/GORE 6 - A man is shot in the back four times; we see his bloody shirt and he slumps to the ground, but we don't see him die. A man is shot in the head with a rubber bullet and he falls to the ground dead; we see a bloody bullet hole at his temple. A man is shot twice with rubber bullets, he falls to the ground and he's dragged away; we see him later and he complains of the pain caused by the bullets. Prison guards fire rubber bullets and several inmates are hit. A group of men are sprayed with a water cannon and they tumble and fall to the ground, and a water cannon is fired at a stone wall which sends stones crashing into some men, hitting them in the head. Several men are forcibly removed from their cells and are beaten; one is slammed head first into a metal railing, one is kicked and clubbed, and one is tossed down some metal stairs. A group of soldiers beat a man with billy clubs and he spits out some blood. Two men fight with punching and kicking with a crowd surrounding them and cheering; one has a very bloody face and a weight tied to a rope is swung over the head of one, but the fight is interrupted. A sling shot is used to shoot fire balls at guards in towers; one is shot into a building where some men catch on fire and we see them rolling around on the ground to put out the flames. A catapult sends stones hurtling through the air; one crashes into the side of a building and one crashes through a large window. A man flies a helicopter into a tower blowing it up, and crashing the helicopter to the ground where it explodes (he emerges with a bloody face). A man is clubbed in the legs, and guards use clubs to pound on men who hold up lunch trays as shields. A man punches another man in the face and shoves him, and a man punches two men knocking them out. Soldiers charge through a prison cell block rousting all inmates to the yard. A water cannon fitted with a hook and chain is fired at a helicopter; it attaches to its landing gear and a man climbs into the helicopter. A group of soldiers in full riot gear break into a visitors' room and drag an officer out while he protests. A group of soldiers carry a man who's kicking and screaming. A man shoves another man to the ground. Men are threatened by sharpshooters, and a man threatens another man with a cement trowel. An officer raises a club threatening to strike a man. A man removes his shirt and we see scars which we are told were caused by electric shock torture in a POW camp. A man falls and knocks his head on a stone; we see a bloody scratch and some blood trickles down his forehead. A man gets a tattoo on his arm and we see the needle puncturing his skin and he bleeds, and we see some men with bloody scratches and wounds on their heads and faces in different scenes. A man relates the details of a man's crime: he maimed his CO with a claw hammer. There are discussions of brutal treatment of prison inmates and references to murders. A man is punished by being forced to stand out in the rain holding a salute all night, a man is punished by being forced to carry large stones back and forth across the yard all day, several men are punished by being thrown in solitary confinement. Armed guards patrol a military prison. Prison inmates bet on how long it will take a man to kill himself.

MESSAGE - Once a soldier, always a soldier. 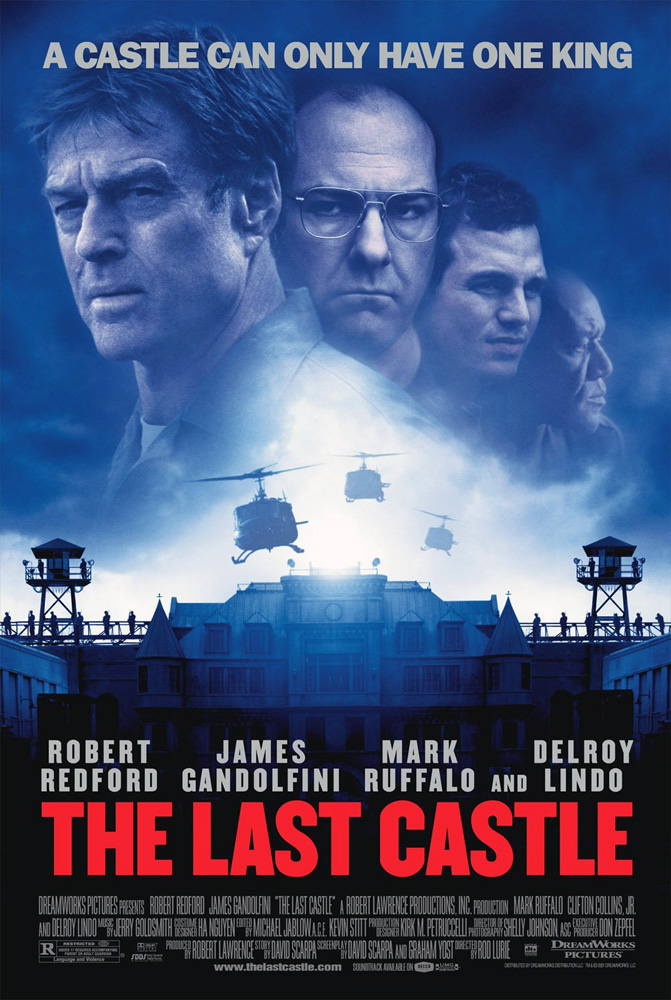