SEX/NUDITY 7 - Almost always played for laughs: Nearly constant sexual innuendo, including references to anal sex, sexual positions, ejaculation, ménage a trois and genital size. Several kisses; also, we see a montage of scenes of couples hugging and kissing, sometimes passionately. After briefly seeing each other in a bar, a man and woman have intercourse (the camera switches from showing her face and shoulders as she comically thrusts to showing him lying on a bed, shaking and wearing a puzzled expression); after they are interrupted, we see the woman sitting on the bed and covering herself with a sheet. A woman wearing cleavage-revealing lingerie, a robe, and thigh-high hose kisses a man passionately, undresses him (only his bare chest is visible), briefly sniffs his underwear after she removes it, kisses down his chest (and continues going down offscreen, based on his surprised facial expression), and then pushes him onto a couch; they end up not having intercourse, though we do see them on the couch together later, briefly kissing again. A clothed woman wraps her legs around a clothed man's waist, thrusts her hips and wiggles her tongue suggestively at him; they presumably have intercourse after the scene ends. We see a mostly-clothed woman and a bare-chested man get up from the floor, presumably post-coitus. A woman falls on top of a drunken man while trying to put him to bed, but she quickly gets up. In a dream sequence, light shines from a man's groin and a woman stares at his groin after he unzips his pants (his lower half isn't even visible onscreen); in another scene, a group of men react in amazement when seeing a man's genitals (we don't see them). A man takes off his pants and puts his hands down the front of his underwear after he's been hit in the crotch; a woman sees him from behind and thinks he's masturbating (he's also standing in front of a TV on which we see a bare-breasted woman and three women washing each other's bare backs in a bath tub). A sleeping man briefly puts his hands down the front of his pants. A quick montage of scenes take place in what looks like the Playboy mansion; we see several women in Playboy bunny outfits, a woman kissing a bare-chested man in bed, and a nude woman posing for a photo shoot (foreground objects cover her breasts and genital area, but we do see a brief glimpse of one of her breasts). Twice, we see a poster showing male and female figures in various sexual positions; also, in a man's apartment we see several bottles of sexual lubricants. A nun unknowingly says a number of double entendres during an interview. It's implied that a man who talks about Greco-Roman wrestling in a few scenes (and is also seen wrestling an opponent in one scene) is gay. We see a man's bare backside as he jumps out of a window, and we see a close-up of his bare buttocks after he lands on the ground and starts running away; we also see what looks like a police sketch of a man's bare backside, a woman's bare shoulders when she's in a bath tub, several women wearing cleavage-revealing tops, and a remote control in the shape of a woman's bare breasts and midriff.

VIOLENCE/GORE 3 - A man puts his head in a noose, accidentally falls off the table he's standing on, lands crotch-first on a chair back, falls to the floor, and is nearly hit with a falling ceiling fan; in a couple of later scenes he wears a neck brace. A woman puts her hand to her chest and presumably has a heart attack. A man is punched in the face by two different women, a man punches another repeatedly, a woman throws liquor and a glass at a man's face, a man is thrown out of a building twice, and a man falls into an open sewer hole (he's not injured). A nude man jumps out of a window, swings to the ground on a clothesline and lands, unharmed, in a small pool. A group of men with some guns and large clippers chase a man in a few scenes, break into a boat, set a boat on fire (we see the boat engulfed in flames), and repeatedly say they're going to cut off a man's genitals with clippers and kill him. A man waves a gun around in one scene, and another briefly threatens a man with a gun. Two men eat some gross/unusual foods: pickled pigs feet, hog testicles, and tentacles; also, a man unknowingly eats feces (the food doesn't look at all like feces).

LANGUAGE 4 - Lots of anatomical references and slang terms (a couple are seen onscreen), several scatological references, many mild obscenities, many insults, and a profane finger gesture.

MESSAGE - Women wouldn't cheat with The Ladies Man if their husbands and boyfriends listened to them and satisfied their needs. Casual sex and money are no substitutes for love. 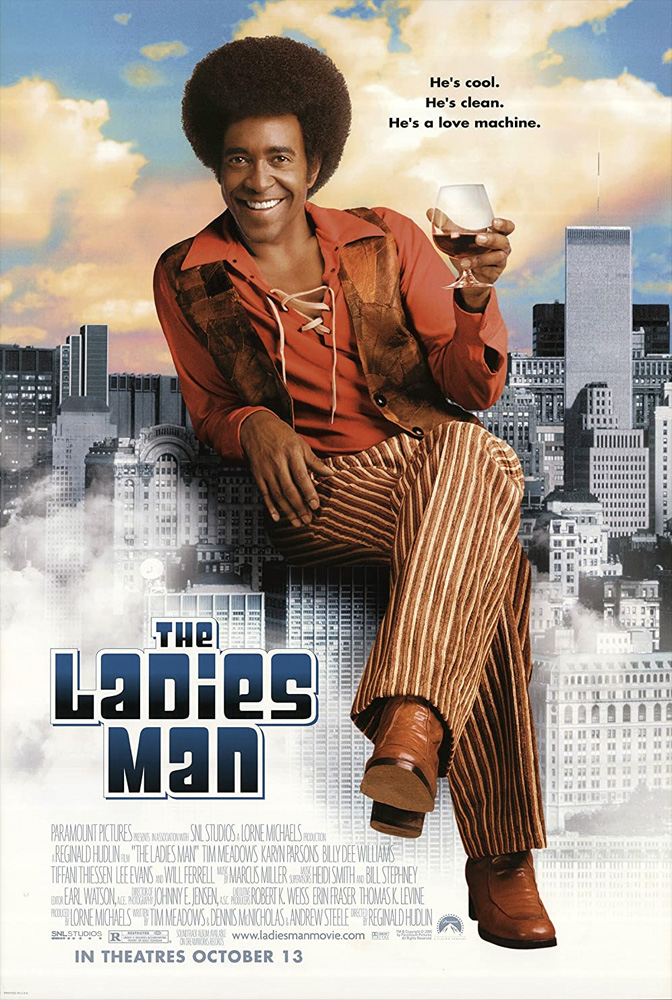