Po the Panda (voiced by Jack Black) is the happy Dragon Warrior, but he begins to wonder why his father is a goose (James Hong). Master Sifu (Dustin Hoffman), Tigress (Angelina Jolie) and Kung Fu friends "The Furious Five" offer him philosophy, but Po must learn more about his past while battling an old enemy. Also with Gary Oldman, Michelle Yeoh, Dennis Haysbert, Jackie Chan, David Cross, Lucy Liu, Jean-Claude Van Damme and Seth Rogen. Directed by Jennifer Yuh Nelson. [1:31]

SEX/NUDITY 1 - A male panda flutters an open hand-held fan, wears red fringe on his head and bats his eyes in an attempt to distract a menacing wolf. A male panda tells a female ram with a beard that he thought she was a "he" because of the beard's false advertising.

VIOLENCE/GORE 4 - Animals fight a major battle with wolves on a ship, using all types of weapons and Kung Fu, other ships are piled together to block a river from a large ship that breaks through with cannon fire and flames, swords, flaming arrows and spears flash and wolves and other animals are punched unconscious; a panda catches a swung axe blade between the flattened palms of his hands without harm, a praying mantis rubs two hands together over a powder keg, his hands explode and it laughs, and we see one group of animals floating on debris in the river, tired out, while a panda deflects many fireballs shot from the ship's cannon.
► A peacock draws a dagger on a panda and as he reaches to kill the panda a ship's mast falls on the bird amid smoke (we see no blood or gore). A peacock takes wolf warriors to a panda city, sets it on fire and drives out the pandas amid flames and smoke; wolves chase pandas off screen (it is implied that these pandas die).
► Throughout the film, we see martial arts fights with acrobatics, punches and kicks, but no blood; a variety of weapons is used that includes daggers, metal darts, flaming arrows, spears, moon-knives (swords), wooden staves, axes, hooks, sledgehammers and a mace.
► Animals inside a dragon costume pull wolves in through the mouth, punch them (we hear punches and "oof!"), and push them out the back, like waste; later, wolves knock out a panda and leave him smudged and dirty. Some animals are stuffed into barrels and rolled away.
► A peacock is thrown out of his palace, so he steals all the metal in nearby cities and makes cannons in a huge, dark foundry filled with vats of molten metals and fire in barrels. A peacock screams at his warriors and guards often and slaps them around; no one is seriously injured. A peacock steals fireworks and makes metal fireworks cannons to destroy cities. A peacock walks into a palace grounds and birds charging forward with spears suddenly fall dead at his feet. A peacock captures three large animal Kung Fu masters and puts them in the dungeon of their own palace; we see only two and hear that the third one is dead, and later several animals try to break the two masters out of jail, but they refuse to go.
► In a dream, a large radish yells and beats up a panda using Kung Fu: the panda awakens on a boat and practices punching a wooden mast, the panda punches a friend on the shoulder, she does not react, saying she trained for 20 years to stop feeling pain, and later they spar; she throws the panda to the floor or across a room and he is smudged with dirt, but unhurt. Wolves and gorillas practice various Kung Fu styles. Animals practice martial arts to fend off possible attack. An accident-prone panda falls repeatedly, but is unhurt. A panda jumps off cliffs and sails through the air with martial arts friends three times and they land on their feet. Wolves chase pandas over rooftops and the panda and one wolf receive head smacks from pots hanging on clotheslines.
► During meditation, a panda sees unsettling visions of his infancy and his mother running away from a wolf. A ghostly oracle depicts a peacock, and then a panda and we hear they will have a battle. A soothsayer sticks acupuncture needles and bandages in and around a panda's body to heal him.
► A peacock shouts about a panda several times, saying, "I will kill him!"; "How many times do I have to kill him?"; "The only good hero is a dead one. Kung Fu will die!"; and "Kill him, somebody kill him!"
► In 3D, we see a number of large objects thrust toward the audience: a sledgehammer, a fist, a spearhead, flaming arrows, feather-like daggers, fireballs, a flaming cannon ball, a grimacing panda face and animals and vegetables thrown up in the air by a speeding 2-wheeled cart. The tower of a palace crashes to the ground in smoke and flames.

SUBSTANCE USE - A soothsayer sticks an acupuncture needle into a panda's eyebrow, he falls into a trance with an open mouth, the soothsayer pours in vile-tasting medicine, removes the needle and the panda coughs at the taste.

MESSAGE - Leave behind an unhappy past and choose to make a happy future. 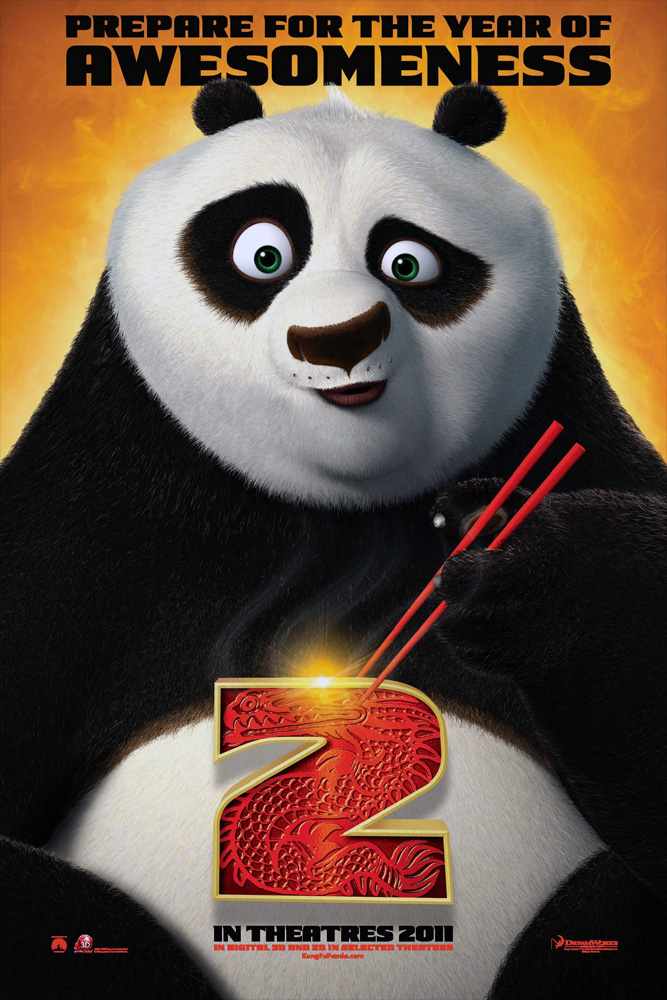