Heath Ledger stars as a young squire who has a talent for jousting. When his master dies, he and his cohorts convince a wandering writer (supposedly Chaucer of "The Canterbury Tales" fame) to create fake documents which help the squire pass as a knight and enter a jousting competition. Also with Rufus Sewell, Mark Addy, Laura Fraser, Paul Bettany, Shannyn Sossamon, Alan Tudyk and James Purefoy. [2:08]

SEX/NUDITY 4 - A completely nude man (we see him from the back, from head to toes, and from the front waist up and then in various positions blocking his private parts) is seen walking down a dirt road with scratches and bruises on his body. A woman goes to a man's tent to seduce him; the man lies in bed with bare shoulders and chest, the woman kisses his hand, then they kiss and hold each other and her tunic falls off her shoulder. A couple of more kisses. A woman wears a sheer to the waist dress with strips of fabric just covering her breasts. Women are seen in cleavage-revealing tunics in many scenes. A woman dances in a modern fashion as she stands on a bleacher bench above a crowd and a large party of people begin dancing a medieval dance and break into modern dance with lots of wriggling and swaying. A man kisses a man on the mouth (as a message from a woman). A man and woman flirt in several scenes.

VIOLENCE/GORE 6 - A man is seen, in the background, hanging from a scaffold and another is in a cage being pecked at by birds. There are several scenes of sword fighting matches which involve two men in armor knocking each other around with really heavy swords until they are exhausted. There are many scenes of jousting with resulting splintering of lances, men being thrown off their horses, and being pierced by flying splinters. During a jousting match a man is stabbed in the shoulder by a lance tipped with a point and another man pulls the tip out, leaving a bloody spot on the man's shirt. There's a tense set up to an important joust and then two men charge at each other and are both hit -- splinters fly everywhere and we see one man pulling a bloody splinter from under his armor. A man is repeatedly pummeled during several jousting passes (he is not defending himself) and he ends up wounded and strapped into a contraption that is used to put his shoulder back into place (he screams in pain a few times and we hear bones pop as the crank is turned). Another man is knocked from his horse, skids across a wooden barrier, flips over and lands hard on the ground. During one joust a man and his horse are knocked to the ground, and another is dragged by the foot behind his horse. Two men charge each other and one is lanced in the helmet leaving a huge dent; we see him later with some scratches on his face. Two men charge at each other in a joust and both are hit leaving one with a cracked chest plate. During a test of a new suit of armor a man is slammed with a battering ram and flies back and onto the ground. A man in armor is propped against a tree while his attendants talk of the fact that he is dead and apparently very smelly; they are unable to approach him without stuffing cloth up their noses. A man in a dark jail cell and with his arms tied is punched in the stomach and face several times, causing him to fall to his knees. A man punches a man in the head and face, another man is punched in the nose and we later see him with a bloody cloth stuffed in it. A man is threatened with a knife. Two men tackle a man, throwing him to the ground and they wrestle around a bit. We see a man nude from the waist up covered with bruises, scratches on his face and a big (but not fresh) shoulder wound. We also see a man with a bruised nose and eye. One character with a very quick temper threatens several people, and later a crowd, with all types of torture. Two men talk of taking a gambling debt out of a man's flesh. A man practices his jousting techniques and there are several scenes with some slapstick falls and injuries: e.g. a man rides toward a target and knocks it with his shoulder and it swings around and knocks him off his horse. A man fights two men with wooden swords, and one is knocked down. A man drops a heavy shield on his foot. A man falls off a boat and into a river wearing his armor and doesn't come up (we see him later and he's fine). A man sucks on his very dirty foot after stepping on something. We see men in stocks and a crowd of people throwing food and rocks at one. The film is set during the Middle Ages and thus everything is dusty, dirty and dank.

LANGUAGE 4 - Several medieval obscenities, five of which are used as, and could be mistaken for F-words (they sound like "Fongue"), a couple of anatomical terms, a few scatological references (with a medieval pronunciation), about ten mild profanities, some non-profane name calling and three religious profanities.

MESSAGE - You can change your fate. Nobility is in the heart, not in your family tree. 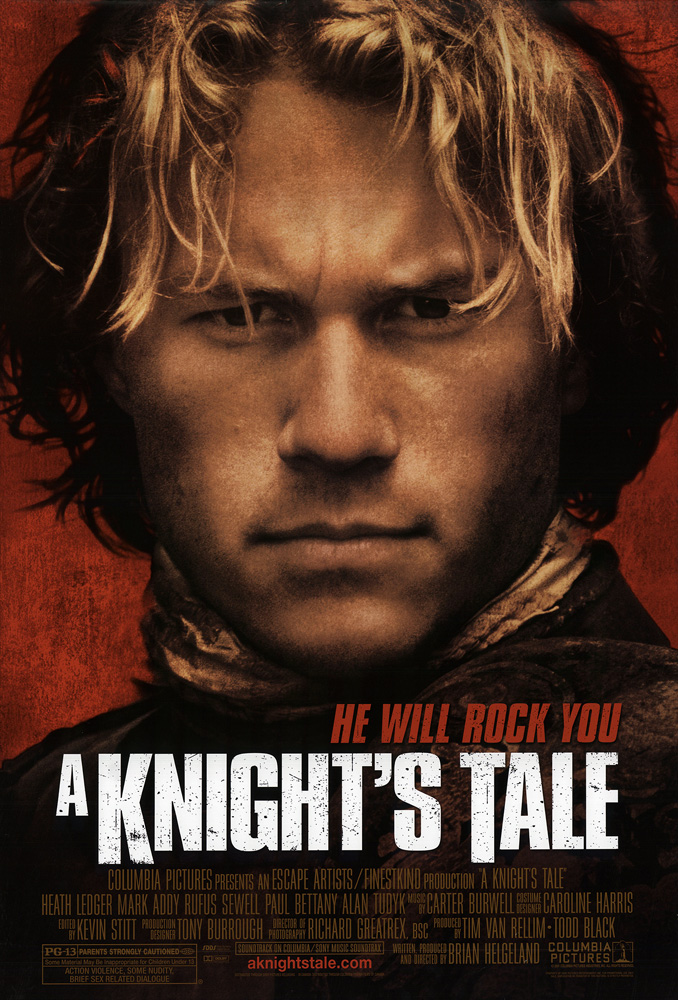