A Pulitzer Prize-winning journalist (Jeremy Renner) discovers significant facts about the 1980s American crack cocaine epidemic and all signs point to the CIA using drug money to finance the Contra rebellion in Nicaragua during the Reagan Administration. As he ignores warnings from the CIA and the mob, he digs up a conspiracy that endangers the lives of his family and himself. Also with Barry Pepper, Robert Patrick, Rosemarie DeWitt, Mary Elizabeth Winstead, Paz Vega, Oliver Platt, Michael Sheen, Michael K. Williams, Ray Liotta and Andy Garcia. Directed by Michael Cuesta. [1:52]

SEX/NUDITY 3 - A woman sits on the same side of a booth in a diner with a reporter, leans close, whispers and pushes her bosom against him, inviting him to her house; he declines, she kisses him on one cheek and leaves (he rubs the lipstick from his face). A husband and his wife kiss each other on the cheek a few times and briefly on the lips in two scenes.
► A shirtless man lies in bed with his wife, holding hands over the covers; we see her bare arms and hands and his bare chest. A woman wears a miniskirt and blouse with a deeply cut neckline that reveals a large amount of cleavage and most of her bare legs to the thighs; she wiggles her hips as she walks away from the camera. A housing project scene depicts dozens of scantily clad women wearing short-shorts and tank tops that reveal bare legs and some cleavage. Three women wearing sleeveless sundresses that expose cleavage. A woman is shown wearing a knee-length dress with a V-neckline in front and back that reveals cleavage. At a pond and in a pool some boys are shirtless. In a prison yard some men are shirtless; some are seen to have indistinct tattoos.
► A man tells his teen son that he had an affair with a female reporter and the woman died by suicide; he says he loves his wife and family and feels having an affair was a mistake. A man's teenage sons say, "She's cool! She's hot!" about a woman that left documents at his house; the man's wife asks who the woman is, the husband and his wife argue about the woman and then kisses briefly. A man tells a reporter that he slept with pretty radicals. A wife tells her husband that she can't take another "Cleveland" (implication of infidelity).

SUBSTANCE USE - An opening montage includes a man free-basing cocaine and smoking it, a man smokes crack from a long crack pipe, a hand from off-screen stirs liquid that becomes rock-hard and dumps it out as crack cocaine onto a scale, a close-up shows a man smoking a marijuana cigarette, a man smokes marijuana at home and in another scene, a husband and his wife each take a puff or two from a marijuana cigarette, a man smokes a marijuana cigarette on a motel balcony, men and women smoke on a littered street in a project (by the way they hold the cigarettes, it is implied that they are marijuana- or crack-filled), an older woman hands a man folded money at his door and he hands her something small (possibly drugs), a journalist uncovers a story involving drugs and the CIA (please see the Violence/Gore category for more details), a document is titled "Danilo Brand Cocaine Distribution Network" and lists many major cities, a drug dealer says about selling crack cocaine that he "couldn't sell it fast enough to keep up with the supply" (a million dollars wholesale product daily), a 1996 Internet page reports that a CIA supported drug-for-guns program sold crack cocaine to the Crips and Bloods in the San Francisco Bay Area, and a webpage logo is the CIA logo with an overlay of a hand holding a crack pipe. A man drinks a bottle of beer in his backyard, a woman carries a bottle of beer in her house, a man drinks whiskey from a short glass in a motel room while a bottle of whiskey sits on his nightstand, a husband and his wife pop open a bottle of champagne and we see two filled glasses but no one drunks, and glasses of wine are seen on banquet tables but no one drinks. A man smokes a cigarette at home and in a motel room in a few scenes.

MESSAGE - Reporting to the public about illegal activities can be dangerous and requires courage. 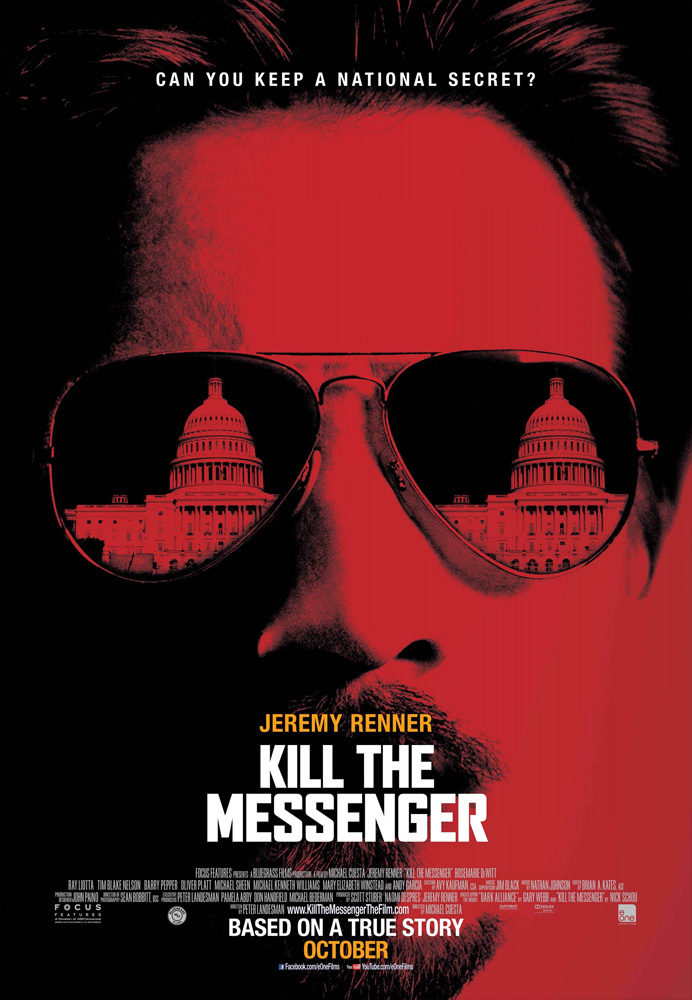