Lindsey Lohan stars as a young woman who has been very lucky and successful all her life. One night however she transfers her luck to a young man (Chris Pine) she kisses at a costume party, and she's saddled with his rotten luck. Now she must find him and kiss him again before her charmed life becomes a complete mess. Also with Samaire Armstrong, Bree Turner and Faizon Love. Directed by Donald Petrie. [1:48]

VIOLENCE/GORE 4 - A cab swerves toward a sidewalk where people stand, a young man shoves another man out of the way of the cab, but he's then struck himself, thrown on the hood of the car and then onto the sidewalk (he is uninjured).
► In two scenes in a jail cell a woman punches a young woman in the face, and a young man punches another young man in the arm. A woman runs into a young man, they both fall down, and she struggles to get him off her, but his pants fall down; she thinks he is trying to molest her, she yells and kicks him in the crotch, and he runs away while being chased by a police officer.
► A young woman's hair gets caught in a blow dryer, she struggles with it, hits a mirror breaking it, the dryer bursts into flames and she drops it in a bathtub and turns on the water -- the power shorts out and the building goes dark. A young woman is shocked badly while trying to change a light bulb. A young man falls back off a chair and shorts out speaker equipment (sparks fly but he is uninjured).
► A young woman gags on an olive, and another young woman gives her the Heimlich maneuver and she spits the olive out. A young woman throws salt over her shoulder, the salt hits a man in the eyes, he yells and falls back over a table, and she runs away.
► A young woman is trapped in a rainstorm, her umbrella blows inside out, and lightning hits the umbrella after the young woman tosses it in the garbage.
► A young man is struck in the eye with a guitar string that breaks (he's OK). A young woman trips and falls into a mound of mud (it's a sculpture). A young woman slams into a glass door, steps back and shakes it off. A young woman is struck in the head with a champagne cork. A young man and a young woman bump their heads together.
► A young man is tackled by a police officer, and he is pushed to the ground and handcuffed. A young man is carried out of a party by security.
► A young man is nearly hit by a cyclist and then nearly hit by a car in the street. A young woman is splashed by two cars that go through puddles on the street, and a young man is splashed by a cab driving through a puddle.
► Many people are trapped on an elevator for a while. A young man bends over to pick up a coin and he rips his pants. A young woman's shoe heel breaks off and she stumbles. A girl opens a soda can and is sprayed with soda. A washing machine overflows, and a young woman and a young man slip on the bubbles.
► A bird defecates on a young man's shoulder (we see the goo). Two young men vomit in trash cans (we hear gagging). A young woman peels chewed gum off the bottom of a table and the gum falls on her (one piece lands in her mouth). A young woman drops her contact lens in a kitty litter box, she fishes it out (we see cat feces), she puts it back in her eye without cleaning it, she complains that her eye hurts and we see her wearing an eye patch later. A dog defecates on a sidewalk, a man picks the feces up using a five dollar bill (we see feces on the sidewalk and smeared on the bill); then a man picks up a five dollar bill not realizing that it has dog feces on it and it smears on his hand. A young woman eats food scraps off a man's plate. A young woman wearing a gas mask enters a men's bathroom to clean it.
► A young woman's apartment is flooded and we understand that almost everything is lost. A young woman is insulting about a woman's art pieces, not realizing that she made them.

SUBSTANCE USE - People drink alcohol in a few party scenes.

MESSAGE - Luck changes, and there's nothing magical about it. If you focus on the bad things you won't have time to enjoy the good things. Look at setbacks as opportunities. 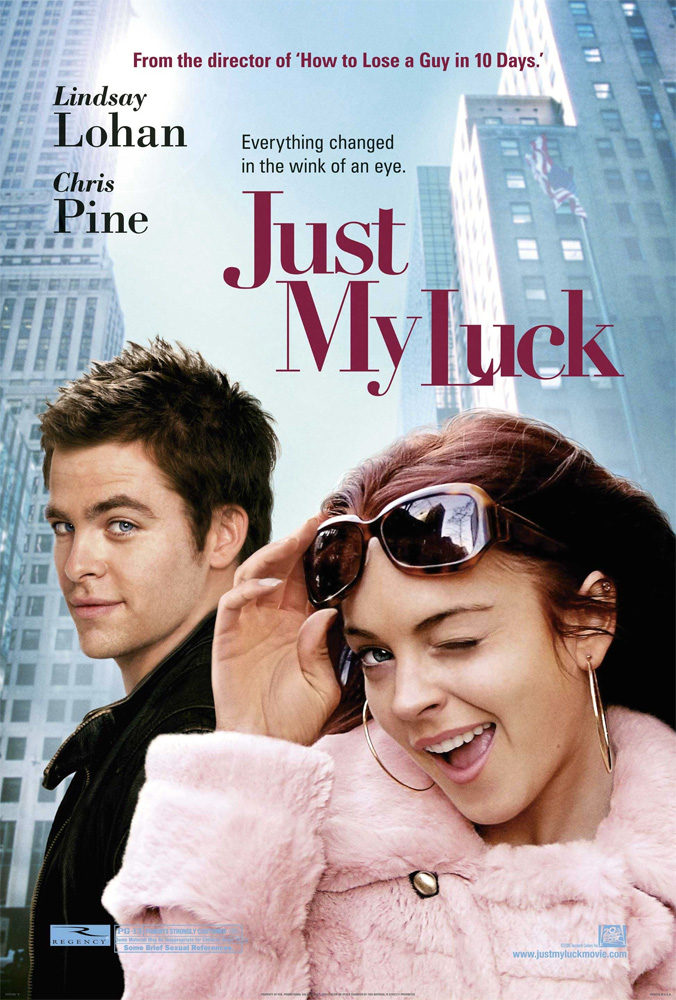