Mowgli (voiced by Haley Joel Osment), Baloo (voiced by John Goodman) and the rest of the jungle friends -- and their foes -- return for a look at how life would be for Mowgli in the human village. Since he was raised in the jungle, he finds it difficult to adjust, never feels like he fits in, and he eventually runs away and comes face to face with the menacing tiger Shere Khan. Also with the voices of Tony Jay, Phil Collins and Jim Cummings. [1:12]

SEX/NUDITY 1 - There is some flirting between a boy and girl and there are references to them as being boyfriend and girlfriend. Boys are shown bare-chested throughout the movie and some of the girls have bare midriffs.

VIOLENCE/GORE 2 - A tiger circles two boys and a girl, snarls at them and chases them; one boy and the girl jump across a moat of lava and dangle from a statue, the tiger joins them, the statue breaks away and they all fall (the tiger is trapped by a statue on a piece of rock in the lava stream and the boy and girl are grabbed before they fall). A tiger approaches a girl and threatens to devour her, the tiger lunges at a boy, and the tiger is tackled by a bear. A tiger squeezes and crushes a coconut that is decorated to look like a boy's head. A boy hears a noise, goes to investigate and is stolen away by a bear, a tiger has also entered the village and the other villagers surround him with torches and poke at him with spears while he thrashes and roars. A snake begins to wrap itself around a girl when a boy hits the snake on the head, and it rolls down a hill. A girl is referred to as a "snack" by a snake, and a girl's torch burns a snake's tummy. A tiger squeezes a bird by the throat, we hear a roar and see feathers flying, suggesting that the tiger might have eaten the bird. A bear roars violently at a girl who punches him in the nose and threatens him. A girl and her baby brother are alone in the jungle and are frightened when they realize they are lost. A tiger threatens a snake and steps on its head twice. A panther is nearly trampled by stampeding elephants and he ends up being dragged into a cave. A bear practices growling and baring his teeth. A boy catapults himself at another boy who is sleeping on a roof beam and they both fall to the floor. A puppet show re-enacts a boy being threatened by a tiger. A snake is pelted in the face with fruit and ends up with a black eye. A boy scares a girl and she falls into a river, a panther falls through a felled tree trunk and lands in a river a couple of times, and an elephant falls from a felled tree trunk and lands in a river. A panther and a group of elephants chase a bear through the jungle. A boy tears down a sheet and falls on the ground snarling (he's pretending to be a wild animal), a boy falls from a tree and dangles from a vine wrapped around his ankle. A boy and a girl bicker in a few scenes, and a bird teases a tiger relentlessly. A man has a scar on his arm, apparently from an animal attack. 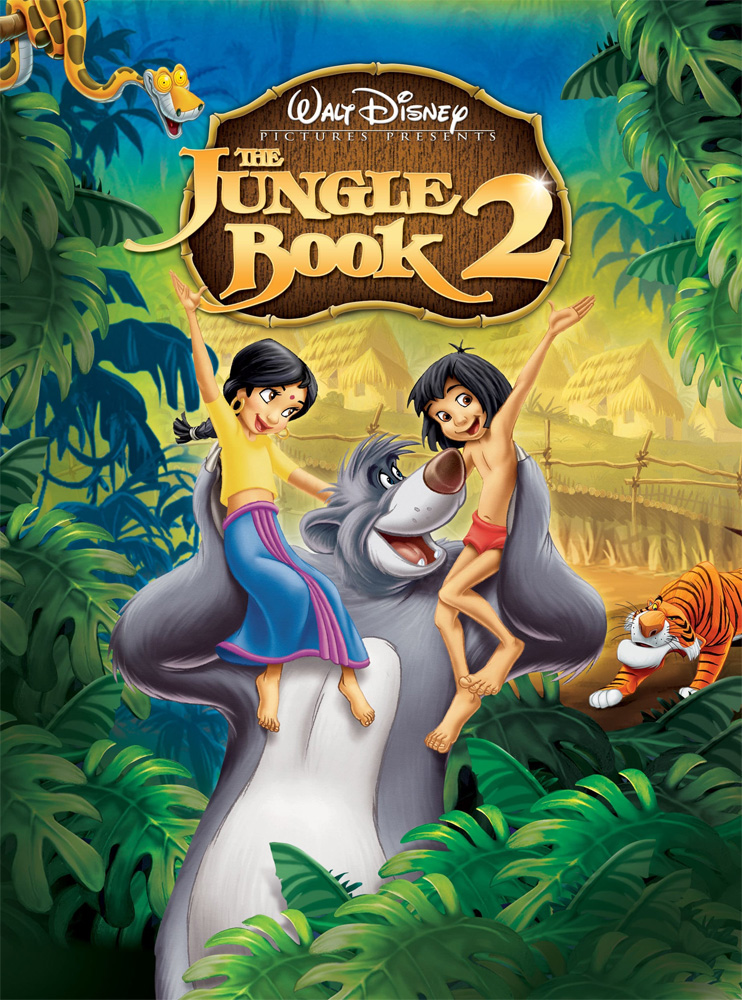