Animated feature about Little Jimmy Neutron, a boy genius who's not very cool. However, when one day all parents on Earth are kidnapped by aliens, he uses his intellectual prowess to invent stuff and leads the children of the world in a rescue mission. He quickly becomes the coolest kid. With the voices of Megan Cavanagh, Mark DeCarlo, Debi Derryberry, Jeffrey Garcia, Bob Goen, Mary Hart , Carolyn Lawrence, Andrea Martin, Candi Milo, Candy Milo Martin Short, Patrick Stewart and Laraine Newman. [1:30]

SEX/NUDITY 2 - Two boys talk about puberty and it makes one boy cry. We see a boy getting dressed and he wears only his boxer shorts. Three girls admire a boy and one flirts with him. A robot dog asks his creator to make him a female poodle companion. When the parents are transported to the alien ship, one man had been sitting on the toilet (he's still seated with his pants around his ankles as he floats through the air toward the ship. One of the ships that the children build is shaped like buttocks and one scene shows something being positioned for insertion.

VIOLENCE/GORE 4 - Most of the aliens in this movie look like green, slimy slugs swimming in egg-shaped glass containers that have a metal plate with pointed teeth. An alien eats a furry creature. As a punishment, an alien is sucked out into space through a large tube. A large alien in an egg-shaped container begins to hatch, blowing off the top of the egg and poking three tentacled eyes out of the hole and pushing two large scaled claws out of the bottom (when we see the whole alien it resembles a chicken with pointed teeth in its beak, a large slimy tongue, tiny wings and dragon-like legs). The chicken-alien pecks at humans lined up at its feet (once getting its beak stuck in a stage floor). A group of alien ships fly into the sun and explode. A group of children are chased by alien spaceships and are fired upon. A ship flies into the chicken-alien's head, it wobbles and falls on top of some other aliens. A huge stadium is filled with cheering aliens when a group of humans is marched out and prepared for sacrifice. A group of children fight with some aliens; one alien is kicked and crashes into a wall, another is sprayed with asthma spray and flies into a wall, and another explodes when a walkman is turned up really loud. A group of children in spaceships fly through a meteor shower and are pummeled by flaming meteors. A boy beats up some guards with a spear-like weapon. A boy enlarges himself, blows on a ship and it flies backward and blows up. A boy is tasered. A robot dog is strapped to a table and an alien scientist prepares to disassemble him. A boy in an aircraft crashes through a bell tower, bounces on rooftops and into a roof knocking the chimney off a house, which crumbles onto a car. A boy is ejected from a flying aircraft and his parachute gets entwined in a tree leaving him dangling upside down. Two boys and a robot dog fly very fast trying to leave the atmosphere, the engines die and the aircraft plummets toward the Earth. A robot dog explodes blowing up an alien guard and blowing open a cell door, and a robot dog explodes leaving shrapnel and a crater in the floor. A boy flies with a rocket pack through traffic after bouncing off a few walls. A boy flies with a rocket pack around a room crashing into walls, dragging a woman along with him and setting the curtains on fire. A boy throws a toaster into the air and it flies back and hits him on the head. A robot dog bites an alien's arm and he's taken away to be "torn apart." Children are locked in a dark dungeon and we see alien rodents skittering along pipes. A "girl-eating plant" with really large pointed teeth snaps at a girl when it is left outside her door, and takes a bite out of a picture of a girl. A boy bouncing in a bubble crashes into a tree and splatters goo all over himself. A boy miniaturizes himself and the shrink ray gadget falls on him. A boy sprays his asthma inhaler into his eyes and yells. A woman is miniaturized by a shrink ray and is threatened by a huge worm coming out of an apple (the worm has a large round mouth full of rows of pointed teeth); the woman uses a pencil to defend herself. An amusement park ride has glowing red eyes and a mouth with big teeth as its entrance; there are apparently flames inside. We see an alien skeleton chained to a dungeon wall. Children carrying torches walk zombie-like toward a boy. Humans are shown with mind control devices attached to their heads. Children panic and begin to cry when they realize that there is no one around to make their ouchies, owies and tummy aches feel better. A pie fight breaks out in a restaurant and many kids get pies in the face. A robot programmed to dress a boy gives him a wedgie when putting his pants on, and a robot ties a boy's shoes together so when he tries to walk he falls flat on the floor. A robo-dog passes nuts and bolts on a doorstep, a boy lifts the robot dog's tail and sprays foam on a fire, a boy vomits on an amusement park ride (we don't see any goo, just hear the sounds), and a boy makes a reference to urinating in the shower. We travel through a boy's ear canal and into his brain and see electrical flashes a couple of times. A boy, woman, man and dog burp very loudly a few times.

(Note: There are several references to an alien god.) 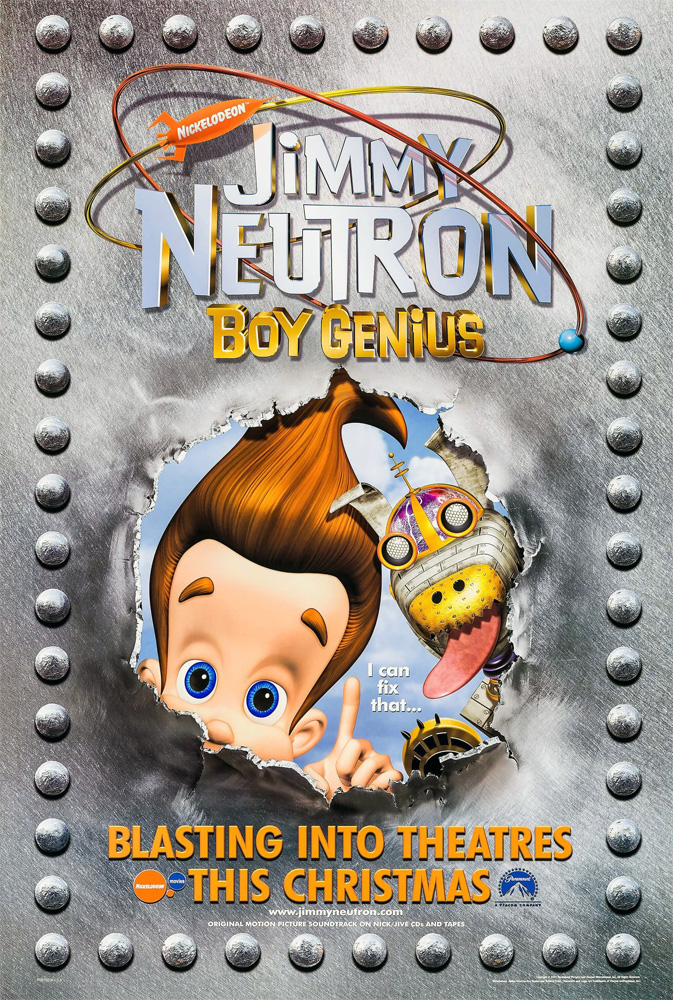