Jet Li stars as a the son of a great martial arts fighter, who's determined to continue his father's legacy by defeating all martial arts masters in competition. After years of training he ends up killing an opponent during a match. The dead man's family seeks revenge by murdering his mother and daughter. Grieving, he leaves his village and wanders the countryside in a daze until he is found and nursed back to health by a community of rice farmers. Also with Betty Sun, Dong Yong, Shido Nakamura and Collin Chou. Directed by Ronnie Yu. [1:43]

SEX/NUDITY 1 - A man is bare-chested during a fight. A woman caresses a man's face tenderly.

VIOLENCE/GORE 7 - A woman lies dead on her bed (we see that her throat has been cut and blood covers her throat and the bed).
► A murdered child is held in her father's arms as he grieves over her (we see blood on the child's arm).
► Two men fight with very large swords: they break tables and a floor, one man is slashed on the arm (we see a bit of blood), one man is slashed on the head (we see blood as it trickles down onto his face), one man is slashed on the chest and the other on the abdomen (no blood is visible), and eventually they lose their swords and fight hand-to-hand, ending with one man being struck hard in the chest (we see a bone pressing against the skin on the man's back) and we hear that the man died from his injuries.
► A man slashes a young man's throat (we hear the swish and the young man falls to the ground as a woman and a child look on).
► We see a badly bruised young man on a stretcher after having been beaten up (he has a bruised and bloody face and a bandaged leg that appears to have been broken).
► One man fights several men with fists and kicks: Initially he fights one at a time, dispatching each one quickly, and then he fights several men simultaneously, dispatching them all, quickly (there's no gore).
► Two boys fight: one punches the other in the nose and then kicks him in the stomach (we see the boy with a bloody nose and bruised eye).
► Two men fight in a competition: they punch and kick while standing on a high structure, one man is punched and kicked and falls over the edge, and he grabs hold of something and swings himself back up to continue fighting.
► Two men fight in a ring while people watch: one man is picked up and thrown to the ground, one is thrown out of the ring and swings from the ropes, one is knocked down several times, one squeezes the other's fingers, one man begins to suffer from blurred vision and he coughs up thick blood, and one is punched in the throat, he falls back, spits more blood and he dies (we hear that he was poisoned).
► Two men fight in a village square while people watch: many punches are thrown and land, and one man is thrown out of the ring and the fight ends. Two men fight with spears: one cuts the other's jacket, and one holds the spear to the other's throat and then knocks him down to the ground. Two men fight with swords: one is slashed on the vest, and one takes the sword of the other one.
► Two men fight, one dodges many punches, and one strikes the other sending him to the ground.
► A man collapses into water and nearly drowns (he is pulled out by someone). Two men are thrown out of a bar and kicked and punched by bouncers.
► We hear a man sobbing uncontrollably over the death of his family. We hear that a man's wife died. We are told that a boy suffers from asthma.
► We see brief newsreel footage of a battle with cannons firing.

MESSAGE - There are more important things in life than glory. 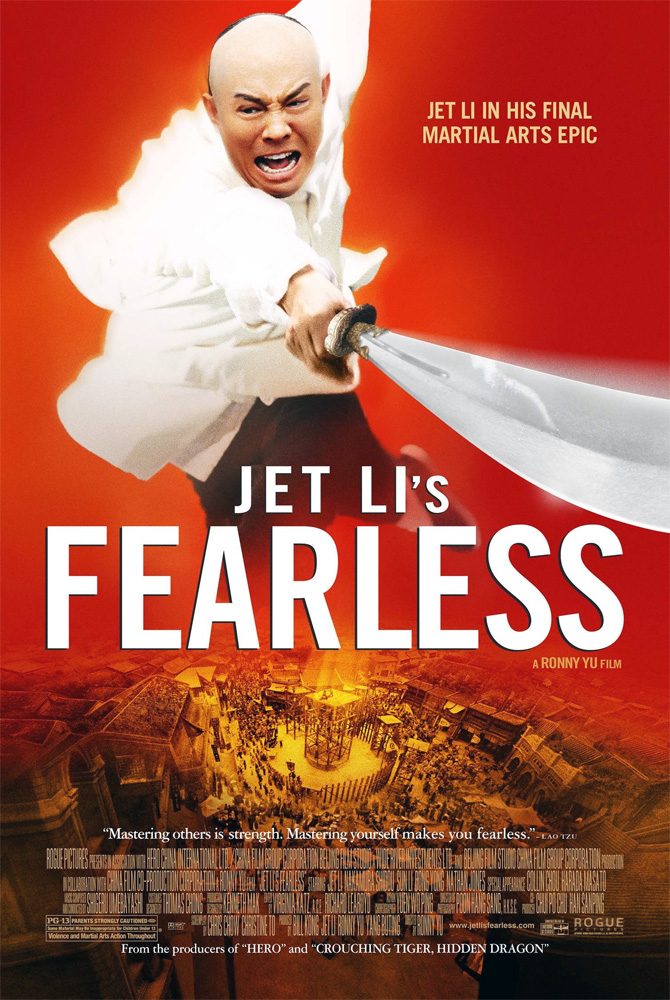