Why is “A Jazzman’s Blues” rated R? The MPAA rating has been assigned for “drug use, violent images, rape, brief sexuality and language.” The Kids-In-Mind.com evaluation includes scenes of sex between a man and a married woman leading to pregnancy, a scene of a teen girl being molested by a relative, a few kissing scenes, a man killed by being beaten, shot and hanged by a group of people and we see his swollen and bloody face, many instances of racism, men discussing lynching another man, a fight and arguments, drug use and abuse, and at least 1 F-word and other strong language. Read our parents’ guide below for details on sexual content, violence & strong language. An unsolved murder leads investigators through 40 years of racism, drugs, lies and family secrets involving teenagers (Joshua Boone, Solea Pfeiffer) in the Deep South during the mid-twentieth century. Also with E. Roger Mitchell, Amirah Vann, Austin Scott and Ryan Eggold. Directed by Tyler Perry. [Running Time: 2:08]

– A man and a married woman sit in a parked car, kiss for several seconds, and the man seems to open his trouser fly below the screen; the woman straddles his lap, moans and moves up and down, they lie down in the seat with the man on top, and we see him thrust as we hear both people moan until the man rolls off the woman to end the scene. A man and a married woman embrace and kiss for several seconds in several scenes. A man and a married woman hold hands in a few scenes. Through a window, we see a teen girl struggling with her grandfather, who is pawing her and kissing her; she screams and later tells a young man that she is impure.
► A man has an affair with a married woman and she becomes pregnant. A woman is shown with a large pregnant abdomen.
► A Black teen girl is taken out of town by her mother, coached to pass as White, and forced to marry a White racist for his money. A teen girl’s mother accuses the girl’s boyfriend of whistling at her (it was illegal at that time for a Black man to whistle at a White woman) (please see the Violence/Gore category for more details).
► A few scenes feature a dozen dancers wearing tap pants or miniskirts slit to the waist with halter tops or sleeveless crop tops as they shimmy and dance in a club (we see matching underwear, legs to the upper thighs and cleavage). A woman in a club wears a long dress and dances on a tabletop (her skirt flows up to about mid-thigh). A woman in a juke joint shimmies briefly as she sings and another woman and a man dance closely and writhe. A woman in a club wears a leopard-print bra top and underwear with large feathers attached as she writhes to music and drums; the camera cuts back and forth from the dance to a woman screaming in pain in labor, crying and open-mouthed; we hear that the baby was born and taken to a hospital (we don’t see anything).

– Several White men capture a Black man and kill him: At night, they drive to the man’s house in a truck, carrying large torches, a woman screams loudly and runs through the streets to warn him, the man goes out to meet the men and they beat him with a club, carry him off-screen, and we hear thumping, screaming and two gunshots off-screen as the man’s mother and another woman in a nearby parked bus scream and cry; the man’s mother finds him hanging from a tree and his face is swollen and bloody.
► A man rushes into a room, tears apart the couch, looking for drugs and screams when he sees another man holding a small bag of white powder; the first man points a pistol at the other man’s face and then pistol whips him, and they fight with punching, kicking, choking and throws until two other men break open the door and intervene with a lot of shouting and finger pointing.
► A husband threatens to drown his wife in the river if she disobeys him in any way; later, he slaps her in the face hard and she screams. A Black woman passing for White berates her Black maid and they slap each other in the face. A woman slaps her adult daughter in the face. A man slaps his wife hard as they both scream, and she picks up a knife, saying, “I will kill you”; he leaves the house and goes to live out of town. Two men belittle and knock a younger man to the ground; they mock and laugh at him in several scenes and once, they hit him with a large stick (we see no injury).
► Several loud screaming arguments occur between two men, a man and a younger man, a woman and a man, a woman and a younger man, and two men. A White man shouts at a Black man for sitting down in the White’s kitchen. In several scenes, we see a woman, a younger woman, or a man cry loudly. A White sheriff demands protection money from a Black woman, she pays him and the man threatens to burn down her house anyway (he does not). Several White men plan to hang a Black man, but he leaves town. A White postal clerk opens all of a Black woman’s mail and steals money and letters from it, telling her, “It came that way.” A woman asks her postal person to stop delivering mail to her adult daughter, and he complies.
► A man stumbles while on a stage and falls when he walks off; another man finds him in his hotel room, passed out, with a hypodermic needle in his arm and the second man rouses him, dresses him, and listens as he says his father taught him to get high (drugged) and also shot his brains out in front of him, saying, “There were brains all over my face.” An elderly man points a rifle at a teen boy and shouts, “I’ll kills [sic] you!” An agitated woman walks slowly many miles to a city, using a cane and she asks a man (a White supremacist) to investigate the murder of a Black man 40 years ago; she gives him a packet of letters to read. A man walks with a cane in one scene and we hear he was injured during army training. A man runs from a car into a field and we hear him vomit; we see him wipe his mouth with a cloth (no goo is visible).
► A man talks about being Jewish, being forced into a ghetto, and seeing his little girl shot dead in front of him. An elderly woman cries loudly over a pile of letters, which had been hidden from her for decades. A man holds several dead raccoons and tells his son to skin them; the son leaves and the mother says she’ll do it (we do not see the animals skinned).

A Jazzman’s Blues SUBSTANCE USE

– A man is addicted to something everyone calls “stuff” and “[scatological term deleted]” (likely cocaine or heroin that comes from a small bag of white powder that we see, it is liquefied, and injected into his inner elbow in several scenes), a man passes out with a needle in his arm (please see the Violence/Gore category for more details), we hear that a man uses a drug (we never see him prepare or inject it) and he sways and falls to the floor presumably under the influence in one scene, a woman prepares home remedies for a man and we hear that he had been using some sort of recreational drug. Glasses of wine are seen on tables and on the bar in a club scene and one man sips from his glass while other men and women hold their glasses, and a few bottles of whiskey are seen on a back bar with a few bottles of wine on the bar in a club. People smoke cigarettes in several scenes.

– Mid-twentieth century America was fraught with violence and discrimination against Blacks and women, yet in the 21st century, the nation still fights these problems. 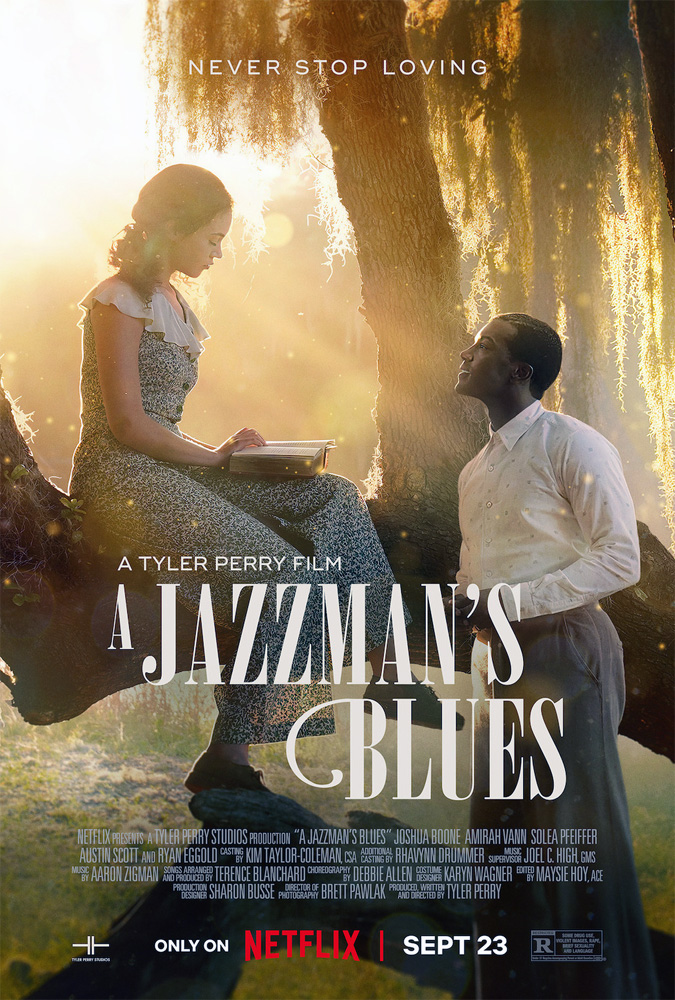